Washington luminaries, former presidents and the family of John McCain gathered Saturday at Washington National Cathedral to honor and remember the late senator in a grand display of pomp and unity in the nation’s capital.

Amid praise for the life and legacy of McCain were frequent lamentations of Washington’s current political climate. The man implicitly referenced in those criticisms, President Donald Trump, was asked not to attend at the late senator’s request and instead visited one of his golf courses in Sterling, Virginia. He also tweeted on several occasions about unrelated topics, including trade negotiations with Canada.

Among the tributes — including from former McCain rivals and Presidents George W. Bush and Barack Obama — was an emotional remembrance from McCain’s daughter Meghan that included several pointed and unmistakable references to Trump.

“We gather here to mourn the passing of American greatness. The real thing, not cheap rhetoric from men who will never come near the sacrifice he gave so willingly,” McCain said in her remarks, during which she often struggled to fight back tears.

“The America of John McCain has no need to be made great again, because America was always great,” she said at one point to sustained applause inside the cathedral.

Drawing a further contrast between her father and the current President, McCain said, “We live in an era where we knock down old American heroes for all their imperfections when no leader wants to admit to fault or failure. You were an exception and gave us an ideal to strive for.” 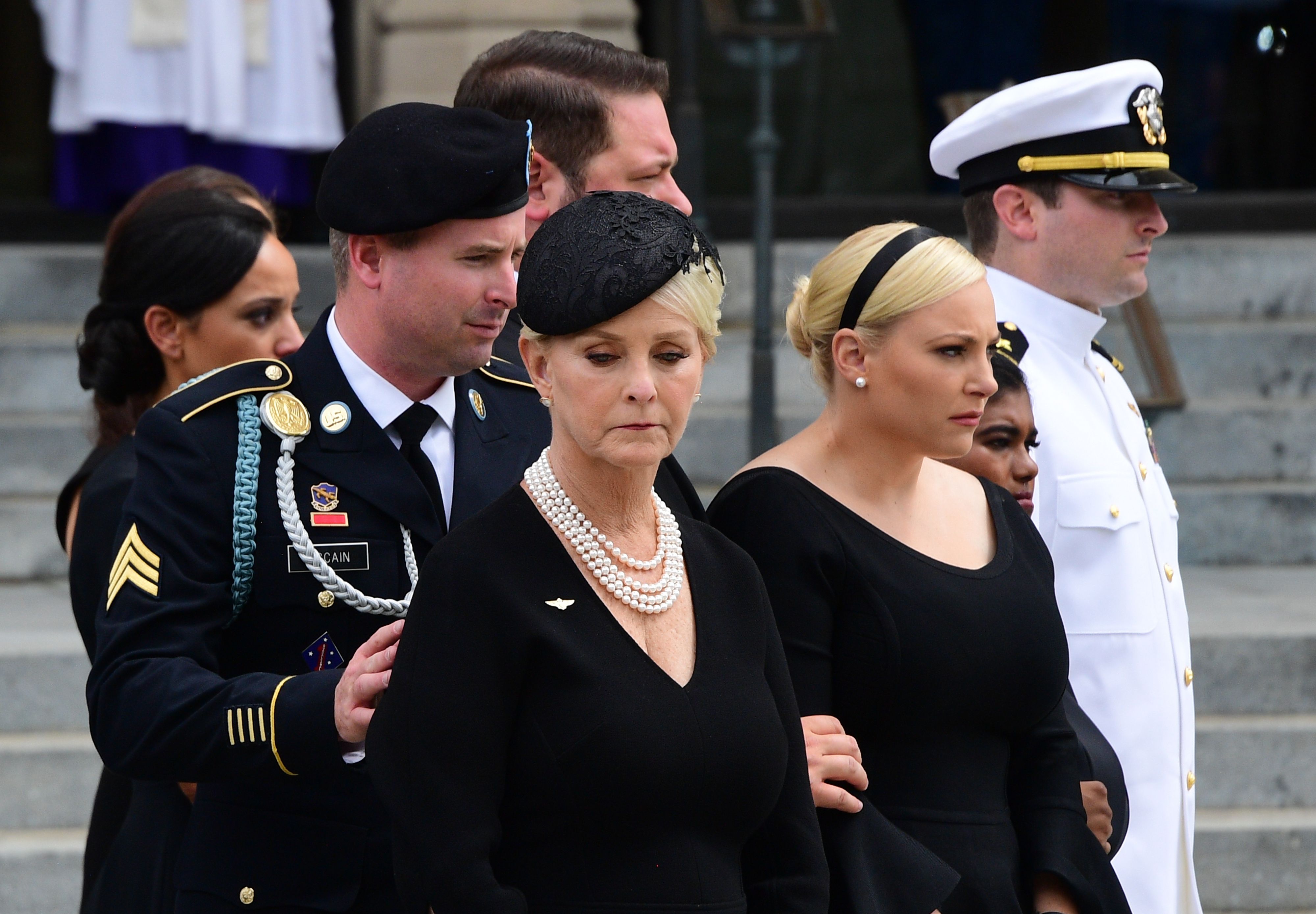 Bush remembered McCain in his remarks as “above all, a man with a code,” saying that “he lived by a set of public virtues that brought strength and purpose to his life and to his country.”

The former President said that the late senator “was courageous” and “honest, no matter whom it offended,” adding that even “presidents were not spared.”

“Those in political power were not exempt. At various points throughout his long career, John confronted policies and practices that he believed were unworthy of his country. To the face of those in authority, John McCain would insist: We are better than this. America is better than this,” Bush said.

Obama said when McCain asked him to speak at the memorial service, he felt a mixture of “sadness” and “a certain surprise.” The request “captured some of John’s essential qualities,” including his “ability to see past differences in search of common ground,” Obama said.

The former President acknowledged the contrast between himself and McCain, saying, “We were standard-bearers of different American political traditions.” But Obama spoke of a deep respect for the late senator. “For all our differences, for all the times we sparred, I never tried to hide, and I think John came to understand, the longstanding admiration that I had for him.”

Obama also opened up about his behind-the-scenes relationship McCain and the bond they shared across party lines.

“We didn’t advertise it, but every so often over the course of my presidency, John would come over to the White House and we would just sit and talk in the Oval Office, just the two of us,” Obama said, saying they discussed policy, family and politics.

“Our disagreements didn’t go away during these private conversations,” he said. “But we enjoyed the time we shared away from the bright lights.” Obama added, “When all was said and done, we were on the same team.”

The remarks from former Democratic and Republican presidents who were once rivals to McCain sent a message of unity and bipartisanship at a time when Washington is deeply divided.

Former Secretary of State Henry Kissinger said at the service that “the world will be lonelier without John McCain,” but that, “even in his parting, John has bestowed on us a much-needed moment of unity.”

Former Sen. Joe Lieberman, a Democrat-turned-Independent, recalled his friendship with McCain and spoke at length about how McCain had wanted to name him as a running mate during his 2008 presidential campaign.

Lieberman recalled questioning whether it could work. “When he first talked to me about it, I said, ‘You know John, I’m really honored, but I don’t see how you can do it,'” he said, remembering a conversation he had with McCain.

He said that the late senator responded with some impatience, saying: “That’s the point Joe … You’re a Democrat, I’m a Republican, we could give our country the bipartisan leadership it needs for a change.”

Former Alaska Gov. Sarah Palin, who was McCain’s running mate in the 2008 presidential election was not invited to any of the memorial services.

Other Washington leaders and longtime friends of McCain attended the service.

Democratic former Vice President Joe Biden, who delivered an emotional eulogy for McCain at a memorial service in Arizona on Thursday, served as a pallbearer on Saturday.

Republican Sen. Lindsey Graham of South Carolina, a close friend of McCain’s, and McCain’s children Jimmy and Sidney McCain all took part in readings during the ceremony.

The President’s daughter Ivanka Trump and her husband Jared Kushner both attended the ceremony. Trump’s personal lawyer, Rudy Giuliani, tweeted later in the afternoon that he and his son attended the ceremony, which he described as a “beautiful service.” Giuliani called McCain “a generous friend as well as a hero and patriot.”

In a poignant moment, as McCain’s casket departed the cathedral, Roberta McCain, the late senator’s 106-year-old mother, sat alone in a wheelchair at the top of the stairs, looking down and wiping away tears. Eventually, a uniformed military officer joined her and brought her back inside the cathedral when the hearse left.

The service followed a public procession that brought McCain’s body from the US Capitol to the cathedral. The motorcade stopped along the way at the Vietnam Veterans Memorial, where Cindy McCain, the late senator’s wife, laid a wreath in memory of those who served in the Vietnam War.

Cindy McCain tweeted on Saturday, “Today we lost our hero, our friend, our mentor, our father, our grandfather and our husband. Together we mourn and together we go on.”

McCain, who died at the age of 81 last Saturday after a lengthy battle with brain cancer, was an iconic figure in US politics. The Arizona Republican leaves behind a storied legacy of serving his country in Congress and in the military as a naval pilot.

The service at Washington National Cathedral is one of several events honoring McCain’s life this week.