EMPORIA, Va. -- The spouse of a Virginia State Police trooper who works with the handler of the K-9 killed in a shootout with a murder suspect in rural Sussex County last week said she felt compelled to act after the dog's passing.

"I felt like I needed to do something for the men that were on the team and also for Vader -- just to honor him," the organizer, who asked WTVR CBS 6 not to use her name, said.

Surprisingly, she said designing and creating the T-shirts only took her about "an hour or two" and that everything for the project just "fell into place."

In fact, she said she already had the photo of Vader that was taken last winter in the snow.

"So I just put it with the blue-line flag," she recalled.

She said she has been overwhelmed by the response. In fact, her initial goal was to sell 50 shirts so the order could be printed. Much to her surprise, 100 shirts were sold in the just the first six hours.

"I just went with it and it got bigger than I thought it would," she said. "It was just really something for the team to know that... our family supports them... And now everybody else is supporting them, too."

As of Friday night, 72 shirts had been sold and $760 had been raised. By Saturday night that number had jumped to 375 shirts totaling more than $4800. And by Monday morning the number had skyrocketed to over 600 shirts told for a total of more than and $7800.

The hundreds of comments on the T-shirt website -- and the balloon-covered K-9 cruiser -- show Vader's story has touched many people.

"I have seen the tributes. It's incredible," she said about the cruiser. "I have definitely looked at the comments... You go through and you read them and there are tearjerkers in there. Just to know that people are supporting our police officers, it just warms my heart."

She said the tremendous outpouring of support is giving "all of the guys that were there" comfort.

"The love and support that people are showing for Vader and these guys is incredible," she said.

While she has never worked with a K-9, she had close friends who do. She said the animals become an integral part of their trooper or officer's daily work life.

"He was my boy," Vader's handler said.

Vader's handler said late Saturday that his partner will never be forgotten.

"Vader, a K-9, a trooper, but also one of my best friends. Vader was not only my dog, he was my boy. I loved him and he loved me even more," Vader's handler wrote in a statement to WTVR CBS 6. "It breaks my heart to know that he is gone, but I know he was one of the good guys and he has made it to a better place. I always watched out for him and his safety; now, he is watching out for me. Vader will not be forgotten and he will always be loved."

Virginia State Police are expected to announce plans for a memorial service for the two-year-old Belgian Malinois as a growing collection of tributes decorates a blue-and-gray K-9 vehicle at the agency's administrative headquarters on Midlothian Turnpike.

Scores of balloons, flowers, dog treats and toys as well as an American flag sat atop the cruiser Saturday.

"Our canine program is essential in so much of what we do as a Department to achieve our public safety mission," Virginia State Police Superintendent Col. Gary T. Settle said on Thursday. "We are all deeply saddened by the loss of Vader and are forever grateful for his sacrifice and selfless service to the state police and the Commonwealth."

A tribute to Vader at VSP Headquarters at 57 Midlothian Turnpike in North Chesterfield.

The Belgian Malinoisis was carried beyond crime scene tape where his life ended in a farewell salute to the fallen state police narcotics detection canine.

A police processional followed for the two-year-old K-9 whose end of watch came just seven months after he graduated training.

The man killed in the shootout with Virginia State Police was murder suspect Tramaine Marquese Poole of New Haven, Conn.

Poole was called the 41-year-old "Public Enemy Number One" after he allegedly fatally shot 28-year-old Tyekqua Nesbitt in front of her two children in New Haven on May 31.

Detectives then set off a nationwide manhunt for the suspect who was considered armed and dangerous and also wanted in New Haven for the first-degree shooting assault of his wife on May 7. He was also a convicted felon who has several drug and gun convictions as well as accessory to assault with serious injury, according to online records. 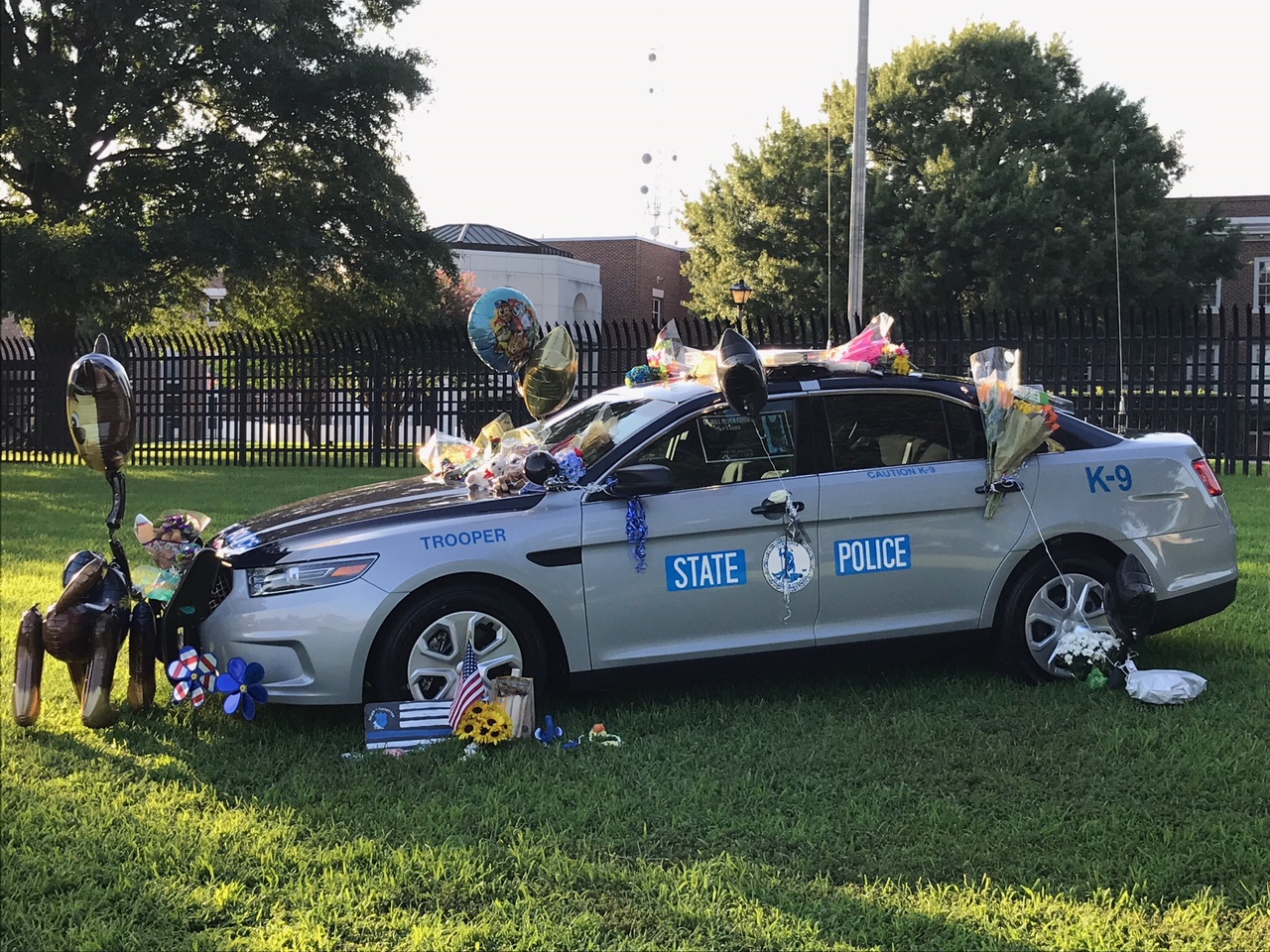