A vandal, or multiple vandals, spray painted the statue of the Confederate general between Capitol Police patrols overnight damaging the west side and southwest corner of the pedestal base, according to police.

The damage, police said, was extensive enough to warrant a felony charge. They said they are amping up their presence around the monument to prevent further attacks.

The State Department of General Services, which is responsible for maintaining the monuments, has been notified and a clean-up crew arrived on scene Saturday morning.

The latest vandalism comes amid an on-going debate of what to do with Confederate monuments in Richmond and around the South.

Carole Zmuda was on her way to Richmond to visit her son when she found out about the vandalism. She said she was disgusted.

"We can learn from history. Why hide it? Why destroy it?" Zmuda said.

She said both her parents are from the south, and the name "Lee" runs in her family. For her, preserving the monuments means preserving America's past.

"Whether it's good or bad, don't take our history away from us," said Zmuda.

But others, like Richmond-native Ben Knuth, don't see it that way.

"I can understand why people would still be angry about it still being up," Knuth said.

Knuth said although he doesn't believe vandalism is OK, he doesn't think the statues should be standing on a public street.

"Something like that should be in a museum. Not in the middle of the city -- kind of like honoring what he did and what he stood for," Knuth said.

Earlier this summer, the 10-member Monument Avenue Commission recommended Richmond remove the monument for Confederate President Jefferson Davis from Monument Avenue. The commission, assembled by Richmond Mayor Levar Stoney, also said the other monuments -- including that of Robert E. Lee -- should stay with added signs to that provide context.

Adding permanent signage that reflects the historic, biographical, artistic and changing meaning over time for each monument, to be drafted by prominent academic historians subject to approval by the Public Art or Planning Commissions.

Creating a permanent exhibit that takes a deeper historical look into the history of the monuments, creating a mobile app and new film and video features that ensure the narrative about Monument Avenue is “consistent and historically accurate.”

Commission a monument that commemorates the resilience of the formerly enslaved, such as a work dedicated to soldiers of the United States Colored Troops.

“Richmond has a long, complex and conflicted history, and the Confederate statues on Monument Avenue represents a shameful part of our past,” Mayor Stoney said following the release of the commission's report. “As I have said before, the statues on this beautiful street are Lost Cause myth and deception masquerading as history. They are monuments to Jim Crow that do not reflect the qualities of inclusivity, tolerance and equality we celebrate as values in our city today. The Commission’s report is unequivocal in its affirmation that there is an overwhelming desire and belief they should not remain as they currently are. Something needs to change, and I could not agree more.”

The commission was formed in June 22, 2017, with the purpose to engage the public and explore ways to add context to existing Confederate statuary and suggest ideas for new monuments.

The Virginia Flaggers, a group that works to protect Confederate monuments and symbols, called on Capitol Police to "launch an investigation to catch and prosecute the vandals." 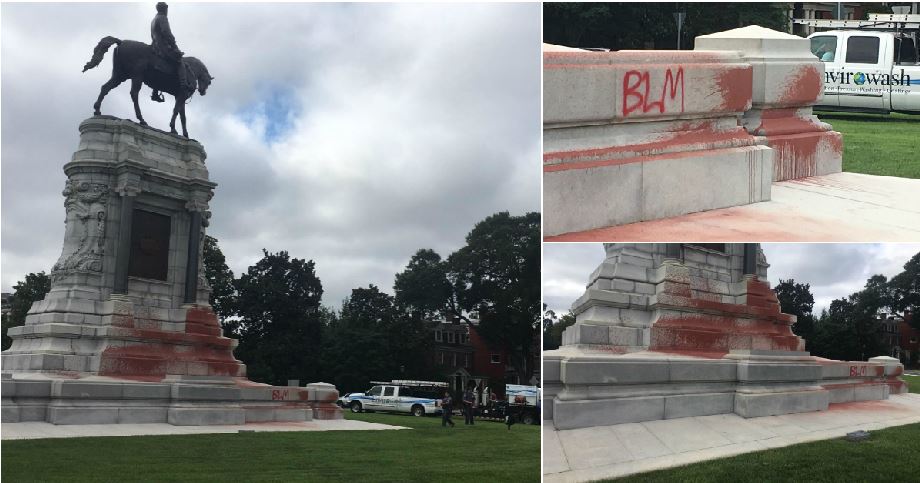