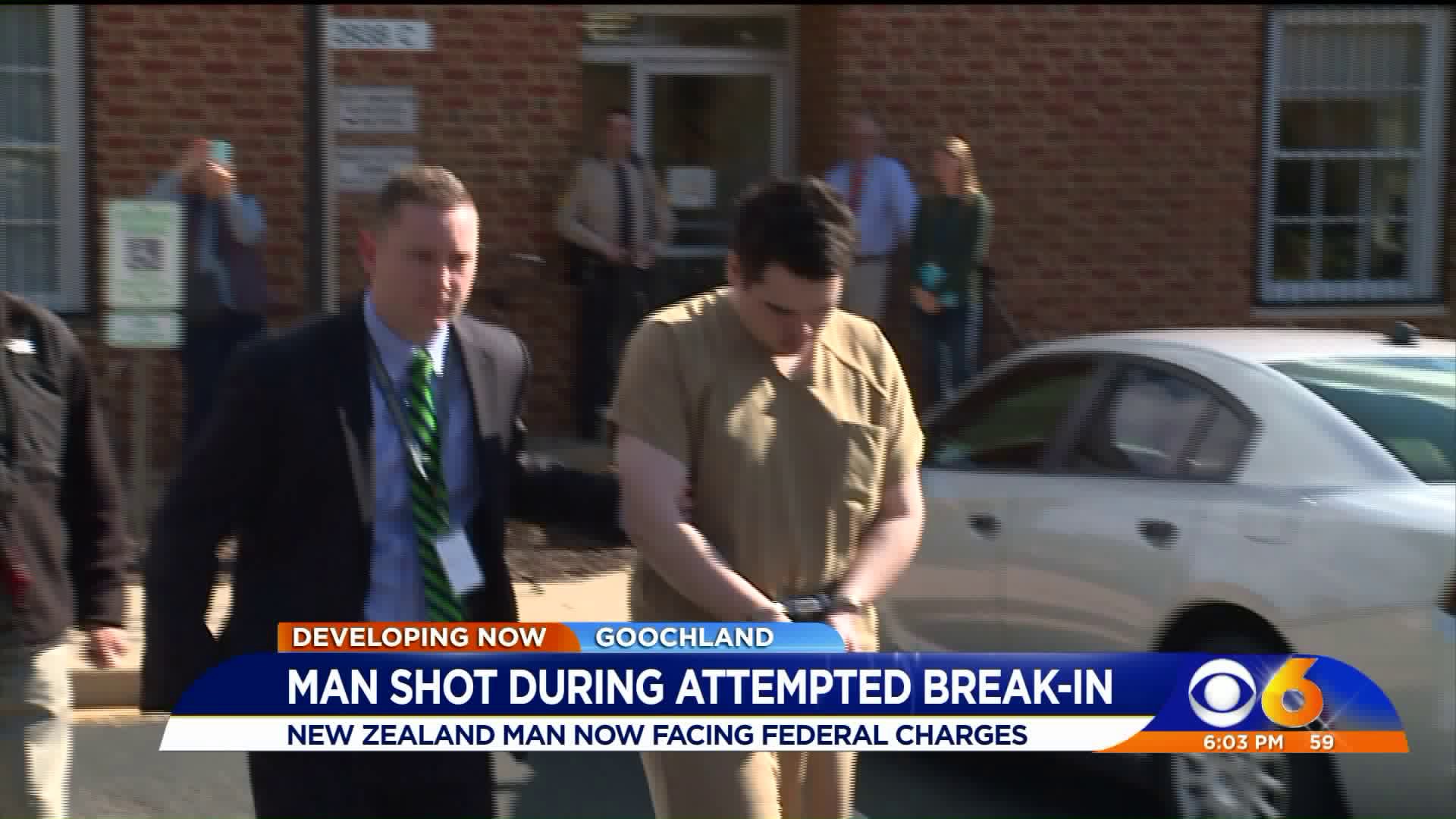 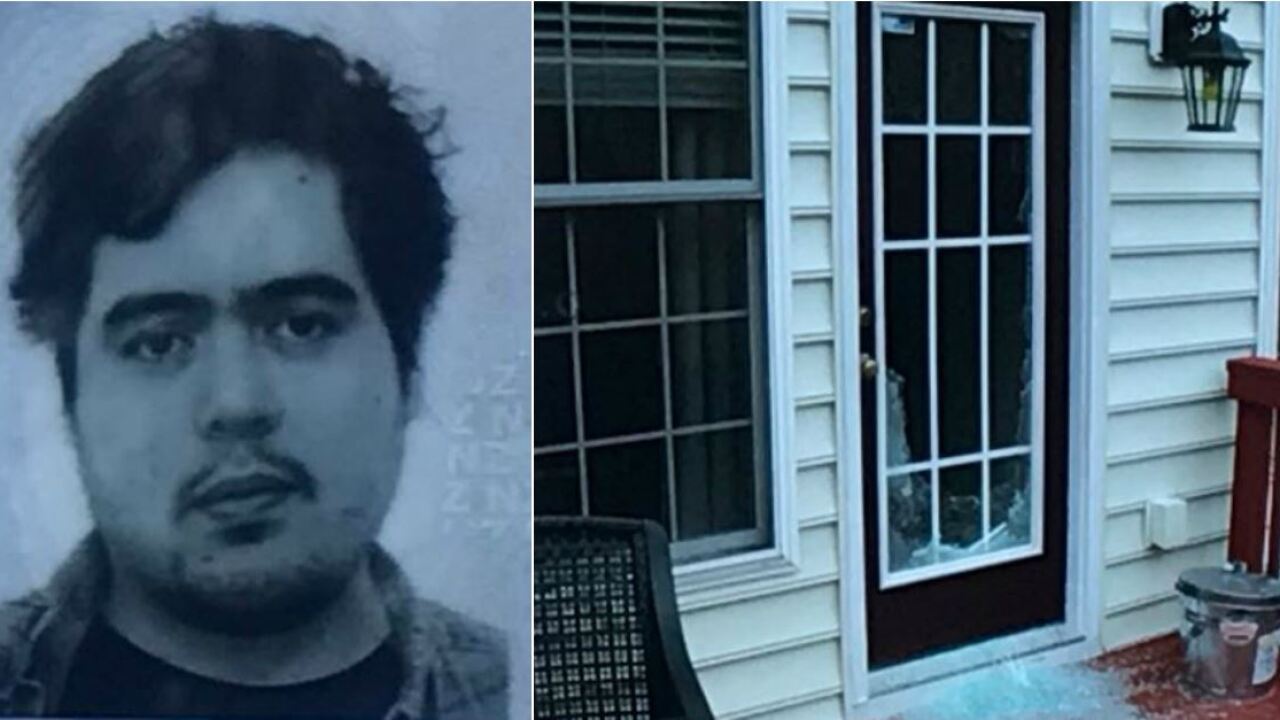 GOOCHLAND COUNTY, Va. -- After being hospitalized for a month, the 25-year-old New Zealand man who was shot outside a Goochland County home last month is behind bars.

Skinner was shot by a woman outside her home in the Holland Hills community the afternoon of June 22.

Officials said the suspect flew to Virginia to meet the woman's teenage daughter after the two chatted using the popular online service for gamers called Discord.

The 14-year-old girl's mother shot Skinner when he attempted to break into the family's home, the sheriff said.

"He was not invited here, he was not expected here, he had been told in the past that the daughter no longer wished to communicate with him," Goochland Sheriff Jim Agnew said.

The violent encounter took place Friday when the mother was home with her two daughters.

They heard Skinner banging on the door with a brick, the sheriff said.

Damage cause to home by man when he threw brick through glass door @CBS6 pic.twitter.com/zwfqFuUvWY

When the mother called her husband, he told her to grab a gun.

When Skinner threw a landscaping stone through the glass door, the teenage girl's mother fired twice, hitting Skinner once in the neck.

He was taken to the hospital where he remained for about a month.

A long-time friend of Skinner’s describes his gaming buddy as an anti-social loner who was not a family man.

“Not many people know him that well he’s got a really narrow group of people who know him he didn’t have a wide social circle whatsoever,” said his friend.  “There’s a group of seven people who have known him for a long time and chat with him daily or semi-regular basis on game related stuff.”

His friend said he knew Skinner was traveling to the United States but thought he was headed to the west coast for a visit with friends before pursuing his studies in law at The University of Auckland.

“The original plan was for him to meet up with some American friends in Portland, Oregon,” said Skinner’s friend.   “He arrived in Los Angeles and was going to take a bus up I believe and the American friends were going to pick him up.  When he didn’t show up they Googled his name and found the news report basically saying that he was in Virginia.”

“I’m so bewildered by what happened I can’t, I don’t know what was going through his head that was so outrageous.  Everyone who knows him is like what the hell has happened?  This is so out of character.   He’s got no history of drugs, no criminal record.  “[He] may be a little aggressive but nothing really crazy,” his friend added.

After three or four months of conversation, the girl attempted to end their communication.

“The younger daughter attempted to stop communications with him he was opening other accounts in an attempt to keep communications open and she did not cooperate with him,” said Sheriff Agnew.

Skinner then flew from New Zealand to Australia, Australia to Los Angeles, and Los Angeles to Washington D.C. From D.C., he took a Greyhound bus to Richmond.

Correction: This is how he got to Richmond. @CBS6 pic.twitter.com/JuSc3DO4Sv

In Richmond, he stayed at Hosteling International USA, according to investigators.

When he arrived at the family's home, he yelled that he had hitchhiked 30 miles to the house and needed help.

"This was not random, not spontaneous, this was something very planned," Sheriff Agnew said.

He was carrying a knife, duct tape, and pepper spray -- that he purchased at the Short Pump Walmart -- when he arrived at the family's home.

“Then you hear about duct tape, knife and are like, 'What the hell is this?'” said Skinner’s friend.  “He’d been on some medication had psychiatrists visiting his flat to discuss certain things apparently there were some antipsychotics,  so this sounds like a mental break of some description.”

His friend said Skinner had also mentioned to his flatmates that he was stressed about a relationship.

Skinner has not yet officially been charged with a crime but there is a warrant out for his arrest and he will be charged with entering dwelling house, etc., with intent to commit murder, rape robbery or arson.

Agnew said Skinner had planned to return to New Zealand on June 30.

Skinner was charged with a one count of Breaking and Entering with the Intent to Rape, Rob or Murder while armed with a deadly weapon.

A hearing in Goochland General District Court is scheduled for Monday, July 30.