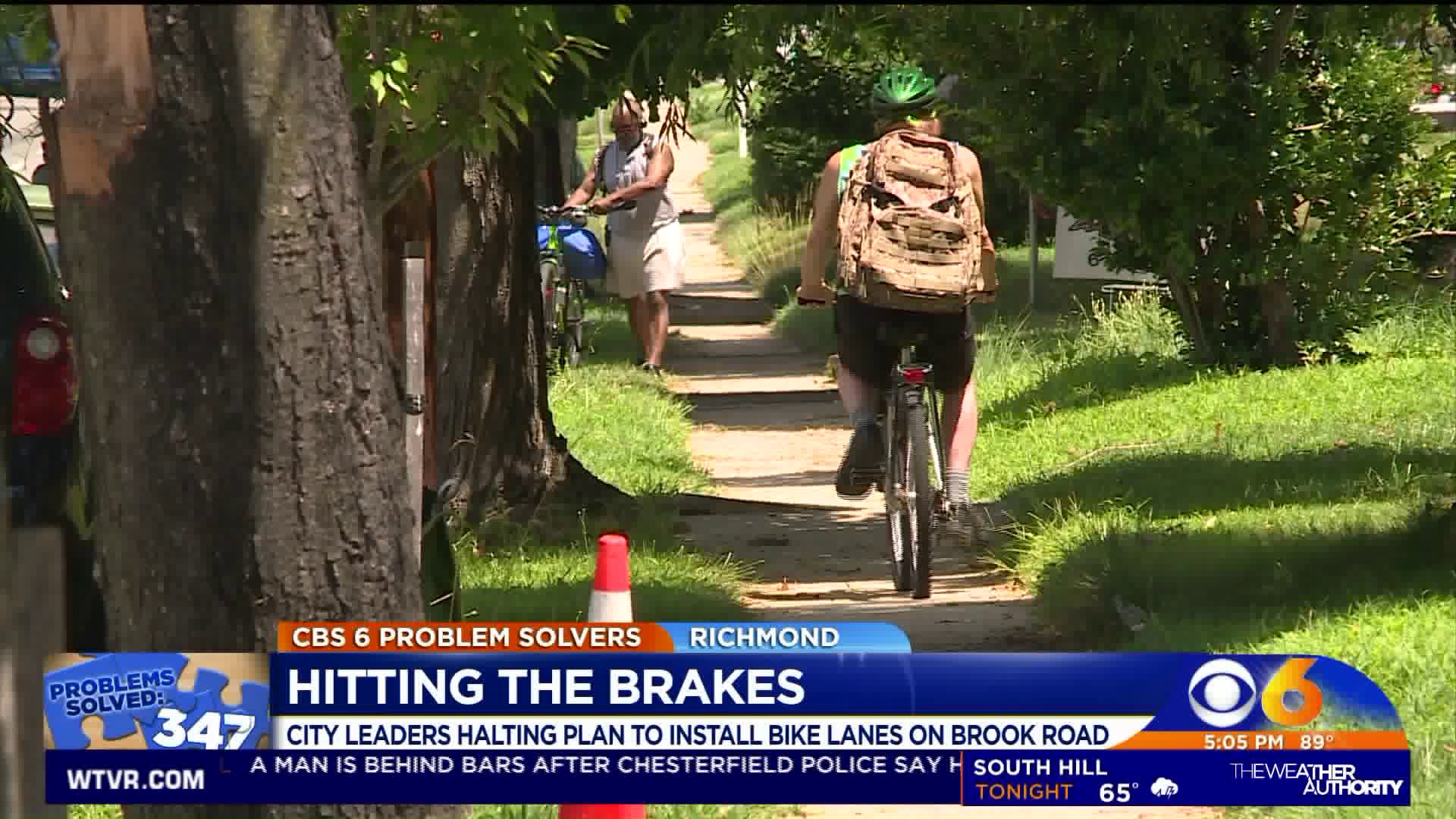 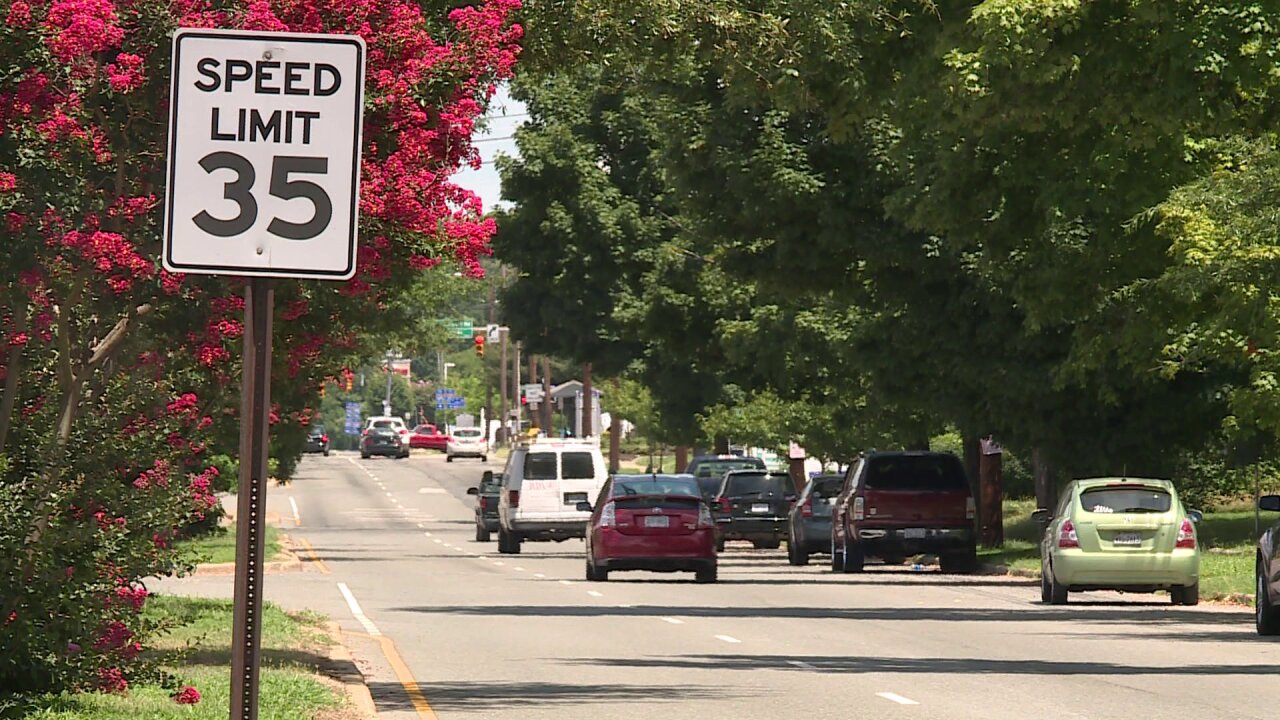 RICHMOND, Va. – During the city’s Land Use, Housing and Transportation committee, an ordinance was continued until September 18 that would prohibit an already funded plan to reduce vehicular traffic lanes on Brook Road and install bike lanes in each direction.

In urban planning language, the Brook Road plan is called a road diet and the city secured state funding to implement the lanes along a 3.8-mile stretch of Brook Road between Azalea Avenue and West Charity Street. The road would be restructured to include room for parking, a bike lane, and one vehicular traffic lane in each direction. It would be similar in design to the new Franklin Street protected bike corridor, though the floating parking lane would be in place all the time.

Hilbert and Gray have cited traffic concerns as the main reason to stop the proposed plan, though the City’s Department of Public Works (DPW) said that to the best of their knowledge, neither council member reached out to them for the traffic and speed data collected by the city in 2017.

The speed limit on Brook Road is 35 miles per hour, but the 2017 traffic study clocked 65% of traffic exceeding 40 mph, and around 2,500 vehicles per day exceeding 45 miles per hour and more than 100 drivers going at least 20 miles per hour over the limit, explained Jakob Helmboldt, Pedestrian, Bicycling and Trails Coordinator for the city.

The traffic study, obtained by CBS 6, was conducted over north and southbound lanes of Brook Road between Windsor and Westminster Avenues for two full days, Feb. 28 and March 1, 2017.

Brook Street at Windsor, southbound, for a 2017 traffic study.

The average daily traffic numbers, between approximately 6,000 and 10,000 vehicles along various parts of Brook -- data collected both by the city and VDOT -- register well below the federal recommendation of 20,000 for a road diet.

The 2017 data was specifically collected so that DPW could have additional baseline data related to the bike lane project, Helmboldt said.

DPW said they stood by their data and design when asked for their response to an ordinance that would prohibit a project which agency members -- many with urban planning experience -- worked on for several years.

“The Department of Public Works’ recommendation is that the Brook Road Bike Lane project be allowed to proceed and this ordinance opposed,” said Angela Fountain, Public Information Manager with DPW.

Fountain pointed out that the project is consistent with several of City Council’s own resolutions, adopted unanimously in support of Complete Streets Policy and Vision Zero Program.  And on May 14, 2018 there was unanimous recognition to the Richmond Department of Public Works, Division of Transportation Engineering for Pedestrians, Bicycle, and Trails for their work.

Gray has said the main concern is traffic around the Veritas School and future traffic from the Westwood Tract, a 300-apartment complex currently under development.

Helmboldt said the Brook Road bike lane plans were contemporaneous to the Westwood Tract and discussions included those changing conditions.

The consulting engineers who reviewed traffic determined that two intersections warranted keeping two through-lanes, plus both turn lanes, and transitioning back to a single lane to ensure adequate level of service during peak hour, according to Helmboldt.

"The analysis showed it would work with a single lane, but would be marginal, and with additional traffic from the Westwood Tract apartments they felt it best to design for the additional capacity up front," he said.

Hilbert, who did not respond to previous multiple requests for an interview, has said on record that “Reducing the number of lanes from two to one will have a huge impact on them and others who travel this corridor. This will also create issues of access for emergency vehicles. To say otherwise, defies common sense.”

The Richmond Ambulance Authority has not experienced any issues with response time and capability due to the installation of the Franklin Street bike lanes, DPW said.

“They also have not received any feedback from RAA workers that is contrary to the absence of issues,” Fountain said. “RAA continues to monitor the bike lanes and other traffic adjustments throughout the City.”

DPW said the city has spoken with Chief Carter of the Richmond Fire Department, who has said he is not aware of any conversations or concerns regarding fire department apparatus avoiding Franklin Street as a travel route because of bike lanes.

“At no time during these meetings did anyone bring up the subject of bike lanes impacting our ability [to] respond on Franklin Street,” Fountain said. “Lastly, there were similar claims that fire personnel were concerned that the BRT Pulse routes would adversely affect our ability to respond, this too has been proven to be false.”

Homeowner Ed Knight said there are plenty of other options for vehicle commuters including Hermitage, Chamberlayne, and the interstate – and the residents would enjoy less traffic on Brook.

From a design perspective, the key is providing for left turns outside of the through lane so that traffic does not bottle up behind the left turning vehicle. All but three intersections at the southern end of Brook, including intersections without signals, have left turn lanes, and the signalized ones have right turn lanes, thus providing intersection capacity, which ultimately becomes the limiting factor in being able to move traffic through (think of it in terms of a hose and a valve), Helmboldt explained.

The left and right turn lanes also distinguish Brook Road as a better contender for the road diet, over Chamberlayne, which does not have the benefit of turn lanes at most intersections and carries twice as much traffic, Helmboldt said.

Council members Gray and Hilbert maintain that residents of the area, and regular users of Brook Road have expressed opposition to the proposed new bicycle lanes.

Bike Walk RVA, a bicycle advocacy group in the city, helped spearhead outreach from second and third district constituents who do actually support the bike lane measure.  Click here for info about their campaign.

There will be more discussion the council members ordinance in September, and a public meeting before the resolution is heard again. Mayor Levar Stoney will also be hosting community hours in the third district on July 31, at the Pine Camp Community Center at 4901 Brook Road. All meetings start at 6:30 p.m.