Trump says he apologized to May for interview 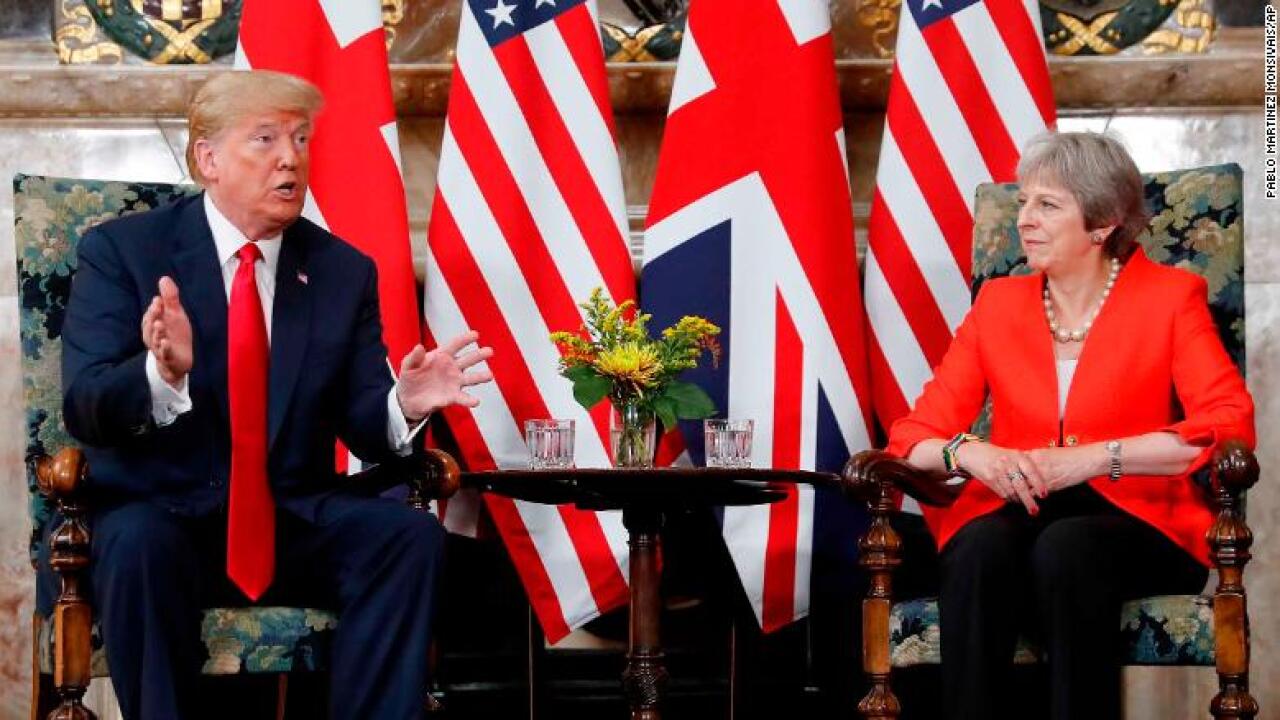 President Donald Trump denied Friday that he criticized British Prime Minister Theresa May, the day after a British tabloid published an interview with him in which he did just that. He dismissed the interview, conducted by a Rupert Murdoch-owned publication, as “fake news” saying it didn’t include his comments praising May.

Trump said his comments came after he “read some reports” that suggested the United Kingdom would not be able to make a free trade deal with the US, but he said May and her representatives have since reassured him that will still be possible.

“I believe after speaking with the prime minister’s people that it will absolutely be possible,” Trump said. “The only thing I ask of Theresa is that we make sure we can trade, that we don’t have any restrictions, because we want to trade with the UK and the UK wants to trade with us.”

Trump also said Friday he apologized to May for the interview, though it appears his apology was about the paper’s omission of his comments praising her, not his criticism.

“When I saw her I said, ‘I want to apologize, because I said such good things about you,'” Trump said.

Trump said May said, “Don’t worry, it’s only the press.”

May insisted Friday that her country would have “no limit to the possibility of doing trade deals around the world” after Brexit.

She was responding to a question about whether her latest Brexit proposal — which includes a “common rulebook” with the European Union — would make it impossible for the UK to make its own trade deals.

May sidestepped a reporter’s question about whether she felt undermined by Trump’s reported comments on her Brexit plan.

Trump insisted that he “didn’t criticize” the British prime minister and said he has “a lot of respect” for her when asked during a joint news conference Friday about his interview with The Sun.

Trump accused the British newspaper of omitting his praise of May, and said, “It’s called fake news.”

During opening remarks ahead of the joint news conference with May, Trump said he is “OK with” however the British decide to carry out Brexit, despite trashing May’s “soft Brexit” blueprint in The Sun.

“The relationship between our two nations is indispensable to the cause of justice, liberty and peace,” Trump said just before the pair took questions.

Asked earlier in the day whether he regrets his interview with British tabloid The Sun, Trump very visibly shook his head and rolled his eyes, turning to his aides with a look that showed his displeasure with the question. May looked toward him after he declined to answer.

Trump’s interview published Thursday amounted to a stunning diplomatic affront for a visiting US president, emerging while Trump was still at a gala dinner May threw in honor of his visit. The dinner offered much of the pomp and circumstance of a state visit, with a military band, red carpet and ornate surroundings, even though Trump’s stop in the UK is officially not a state visit.

For May, it comes at a time when she is already politically weakened following a string of resignations from her Cabinet.

Despite Trump’s criticism — which pounded the front pages of nearly every British newspaper — he and May carried on with their regularly scheduled meetings on Friday. Trump and first lady Melania Trump are also scheduled to have tea with Queen Elizabeth II on Friday afternoon, his first visit with the British head of state.

The US first lady visited the Royal Hospital Chelsea this morning with Philip May, husband of the prime minister, while their spouses meet at Chequers. The Royal Hospital is not actually a hospital, but a home for retired soldiers, known as the Chelsea Pensioners.

The White House attempted to mollify Trump’s criticism, with White House press secretary Sarah Sanders releasing a statement insisting that “the President likes and respects Prime Minister May very much.”

“He thought she was great on NATO today and is a really terrific person,” Sanders said. “He is thankful for the wonderful welcome from the prime minister here in the UK.”

But Sanders’ statement will likely do little to clean up Trump’s black-and-white comments about May’s handling of Brexit negotiations, in which Trump warned that May’s “soft Brexit” would likely “kill” the prospect of a new US-UK trade deal and explained that he “told her (May) how to do” Brexit.

Trump also all but endorsed May’s chief political rival within her own party, the recently resigned British Foreign Secretary Boris Johnson, calling him “a very talented guy,” lamenting his resignation from May’s Cabinet and saying he believes Johnson “would be a great prime minister” — though he insisted he was “not pitting one against the other.”

Trump’s rebuke of May came even as the UK prime minister offered her support for Trump’s controversial upcoming summit with Russian President Vladimir Putin.

“I welcome President Trump’s forthcoming meeting with President Putin: Open channels of communication between the US and Russia are key to managing the risks of confrontation,” May said in a speech during a working dinner with NATO allies, according to quotes from her remarks provided by her office.

Her government rolled out the red carpet for Trump and worked with the US to pull off a visit that mitigated the effect of long-expected protests in London.

The US President, who has faced planned protests in London since his arrival, also told The Sun he feels “unwelcome” in London, explaining why much of his visit will take place outside the capital city.

The “Trump Baby” blimp that was expected as part of the protests floated up outside of Britain’s House of Parliament on Friday morning.

Blimp organizer Leo Murray told CNN the giant balloon had been designed to speak to Trump “in a language that he understands, which is personal insults.”