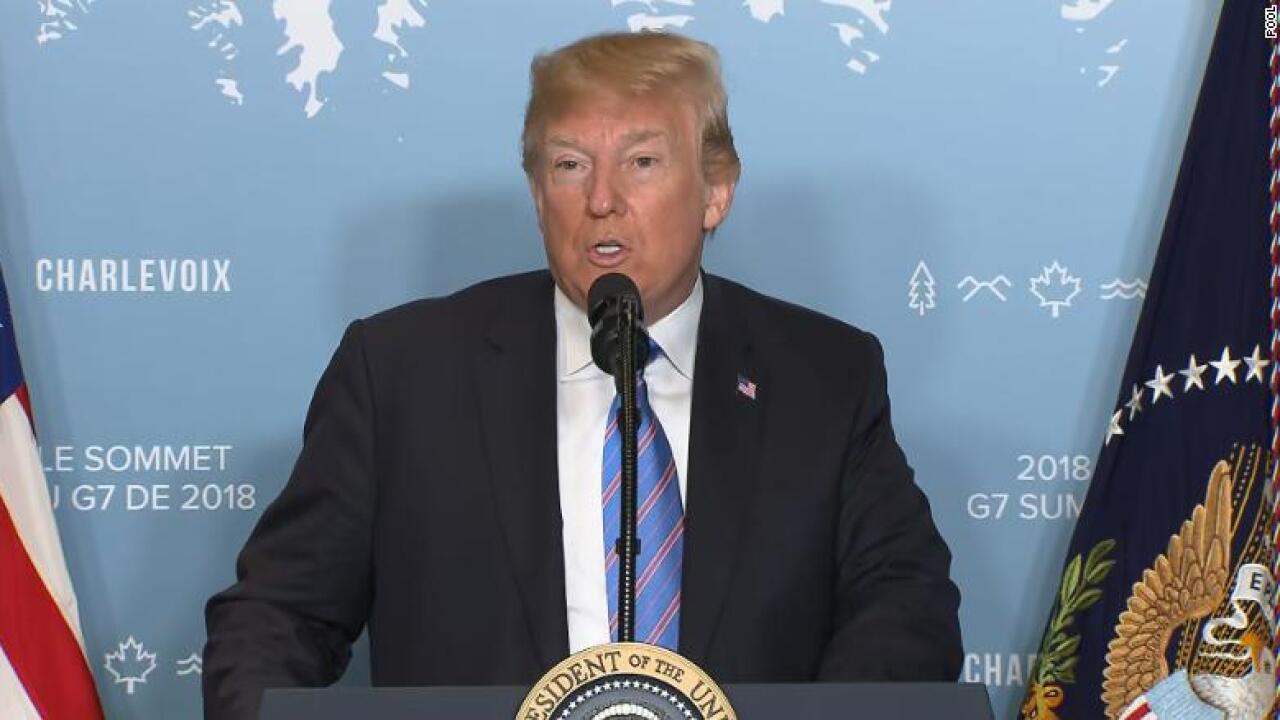 President Donald Trump on Saturday doubled down on his call for Russia to be readmitted into the G7 and blamed his predecessor for Russia’s aggression in Crimea.

Russia was suspended from the group — then known as the G8 — in 2014 after the majority of member countries allied against its annexation of Crimea. It was the first violation of a European country’s borders since World War II.

Trump suggested that Russia be allowed back into the global group despite their continued occupation of Crimea.

“I would say that the G8 is a more meaningful group than the G7, absolutely,” Trump said. He also blamed former US President Barack Obama for Russia’s move into that nation.

“You’ll have to ask Obama, because he was the one that let Crimea get away” he said when asked about the annexation. “He allowed Russia to take Crimea. I may have had a much different attitude.”

Trump’s advocacy for Russia’s readmittance to the powerful group of industrialized nations — which he first voiced on Friday — comes despite consistent opposition from European allies.

German Chancellor Angela Merkel said at a press conference Friday that there was consensus that Russia should not return to the G7.

“We agree that a return by Russia to the G7 format cannot happen as long as there isn’t any substantial progress in regard to the problems with Ukraine. That was the common view,” she said.

Canadian Foreign Minister Chrystia Freeland told reporters on Friday that “there are no grounds whatsoever for bringing Russia, with its current behavior, back into the G7.”

“We (have) always been clear we should engage with Russia where it is in our interests, but we need to remember why G8 became the G7, it was because Russia illegally annexed Crimea,” a European diplomat said Friday. “Since then we have seen an increase in Russian misbehavior and attempts to undermine democracy in Europe. It is not appropriate for Russia to rejoin until we see it behaving responsibly. Putin should get nothing for free.”

This sentiment was echoed by a senior United Kingdom government source.

“The PM has always said we should engage with Russia but beware. We should remind ourselves why the G8 became the G7 — it was after Russia illegally annexed Crimea,” the source said. “Before any conversations can take place about Russia rejoining, it needs to change its approach.”

Lawmakers in the United States have also condemned Trump’s comments, which some have taken as the latest example of the US President’s failure to condemn Russia for its interference in the 2016 election.

“The President has inexplicably shown our adversaries the deference and esteem that should be reserved for our closest allies,” Republican Sen. John McCain of Arizona said in a scathing statement Friday.

Nebraska Republican Sen. Ben Sasse said in a statement, “Putin is not our friend and he is not the President’s buddy. He is a thug using Soviet-style aggression to wage a shadow war against America, and our leaders should act like it.”

Former Vice President Joe Biden denounced Trump’s remarks, writing on Twitter, “Putin’s Russia invaded its neighbors, violated our sovereignty by undermining elections, and attacks dissidents abroad. Yet our President wants to reward him with a seat at the table while alienating our closest democratic allies. It makes no sense.”