RICHMOND, Va. – A historic Richmond street that houses many landmarks has become one itself, with the newly established Franklin Street protected bike corridor;  a two-way “cycle track” for bicyclists that is physically separate from pedestrians and vehicles.

Over the past five years, the city has been focused on incrementally developing key bicycle infrastructure, and the new Franklin Street protected bike lanes in the heart of downtown might be the most visible piece yet.

"It feels like a game changer," said Jake Helmboldt, who was hired as the city’s first Pedestrian, Bicycle & Trails Coordinator in 2011.

It certainly has ushered in some changes to be aware of.

The project spans 15 blocks, from Belvidere Street at VCU’s Monroe Park Campus down to the State Capitol. Parked cars and plastic posts are utilized to buffer cyclists from traffic.

The car is incorrectly parked in the bicycle lanes.

Drivers now have one lane to traverse Franklin, except during peak hours from 7 a.m. to 9 a.m., when the north lane will also open for traffic. For the other 22 hours of the day, vehicles will park beside the bike lanes, in a configuration known as floating parking.

“Protected bike lanes and floating parking are really being utilized all across the country at this point,” Helmboldt said. Still, he acknowledged that the biggest challenge will be adapting.

“It feels like double parking,” he said. "Floating parking will seem odd at first, so it's a matter of people getting used to it and seeing others do it to understand it is OK to do."

Though it will look different, parking in a floating lane is essentially the same as parking next to a typical curbside lane. The key is not to drive into the bicycle lane.

Overall, parking availability -- which Richmond loves to lament the loss of -- has not really changed, except for about 19 spots, most of which were removed near Belvidere to allow for transition across that intersection.

Drivers and cyclists alike will need to be aware that traffic still crosses the bike lanes, mostly at intersections, but also at parking decks. Helmboldt said that the city tried to call attention to these points by putting bike stencils at such entrances and exits.

Stencils painted in front of parking garages to draw awareness to the bike lane.

There  will be a ribbon cutting for the bike lanes on May 18, though Helmboldt said there may be a couple details that remain unfinished, such as a handful of signs or pavement markings that still need to be installed.

City planners estimate it will take a couple of weeks for everyone to get used to the changes, and encouraged patience and awareness.

“In a few months this won’t even be an issue, I think,” said Max Hepp-Buchanan, Director of Bike Walk RVA.

The city ordered signs to help direct cyclists and drivers.

The one-mile stretch along Franklin Ave. moves around 6,600 and 9,900 commuters daily and the speed limit is 25 mph.

The $370,000 project – 70 percent of it covered by federal funding -- looks different and is more high impact than most of the bike infrastructure installed by the city thus far, though Brook Road will get the same treatment in a couple of months.

“We are at the point where we are starting to see things come together,” Helmboldt said.

For example, cyclists can easily travel a five-mile distance from the Museum District down to Great Shiplock Park to pick up the Virginia Capital Trail.

The Floyd Avenue Bicycle Boulevard connects with the newly renovated Monroe Park (almost complete), which leads to the Franklin buffered bike lanes. Cyclists can cut over to Bank Street which turns back into Franklin and goes under the Main Street Station, and then take the 17th Street buffered bike lanes (under construction) over to Dock Street.

“It’s important to reiterate that the ultimate goal is a connected city network so that you can get to and from places on a bike; doesn’t do any good to build just one lane or road,” Hepp-Buchanan said. “Keep in your minds that ultimate goal and how it is going to make bicycling viable for people of all ages.”

Helmboldt recalled how friends and family asked, “what are you thinking?” when he accepted his position with the city seven years ago.

“I figured, they are throwing their hat in the ring on this, I have an opportunity to shape where they are headed on this, so for better or worse, let’s take a stab at this,” he said.

Since then the city had adopted its Bicycle Master Plan, identified approximately 80 miles of bike lanes, with more than 28 miles completed and another approximately 20 miles designed and awaiting coordination with completion of utility work.

And the plans seem to be working.

“Almost anywhere the city has built bike infrastructure there has been an increase in cyclists,” Hepp-Buchanan said.

When all construction is done, 17th Street will also have protected bike lanes.

Other pieces simultaneously contributing to the city’s transportation evolution are a bike share program and the GRTC Bus Rapid Transit known as the Pulse, something Hepp-Buchanan said is a lot of accomplishment over the last five years.

“Richmond was far behind, but the rate of acceleration is incredible,” he said. “We are actually moving relatively fast compared to other cities that have made the same journey.”

"I think we are finally hitting our stride,” he said, “and changing the culture internally, even.”

“The pride and buy in from folks taking pride in the fact that they are a part of changing infrastructure in their city,” Helmboldt added.

Resources to help understand all this new bike infrastructure:

How do the Franklin Street Protected Bike Lanes work:

Cyclists use the bike lanes. Drivers use one lane of traffic, except during peak hours from 7 a.m. to 9 a.m., when the north lane will open. There will be parking 24 hours a day at the south curb of Franklin, according to Helmboldt. When peak hours are over, floating parking is done on the outside of the bike lane buffer.

What to look out for:

Cyclists traveling across intersections will utilize the pedestrian signal for right of way. Be aware of turning traffic at certain points. Starting at Madison Street, down to Adams Street, eastbound cyclists will merge with traffic and use the sharrows instead of the bike lane, because the block is narrower than the rest of Franklin Street. In theory, the only time there will be traffic there is during the 7 to 9 a.m. peak hour. There is no parking on that 1.5 block stretch.

This section of Franklin Street is more narrow, and there is only a westbound protected bike lane for 1.5 blocks.

Why not Grace Street?

Grace was discussed (as a parallel route one block off of Broad) but has been undergoing the two-way conversion which negated that option.

What big projects are next:

Work is underway on 17th Street, which will be a two-way cycletrack with flex posts like on Franklin St. The intersection at Dock Street will have improved crossings and an RRFB (Rectangular Rapid Flashing Beacon) to alert motorists that bicyclists and/or pedestrians are crossing, and to yield to them. This will then provide improved access to the Canal Walk and the Cap Trail. That should be completed within three months.

Brook Road will be a protected bike lane, from Azalea Avenue to Charity Street. It is designed, but the city is waiting on completion of gas line replacement. Once DPU completes that, the impacted section of Brook will be repaved and the reconfiguration will take place. That may have to wait until early spring 2019, unless they manage to repave before winter. Traffic on Brook Road was less than on Chamberlayne Avenue, and Brook has better left turn areas to accommodate traffic flow.

What is Bike Walk RVA and how are they involved in city bike infrastructure:

Bike Walk RVA is a part of Sportsbackers, a nonprofit focused on active living that started over 25 years ago. They focused on sports tourism and then began started to own and operate their own events.  When the board updated their strategic plan seven years ago, they wanted to make sure everyone had opportunities for physical activity that weren’t a pay to play model. According to Hepp-Buchanan, they decided the best way to do that was to advocate for models that make biking walking safe for everyone. Programs of Sports Backers advocate for more bike lanes, bike trails, and safe streets that gets people outside for any reason.

What is a Portland loo:

Once the Monroe Park renovations are complete, these new public toilets modeled after Portland loos might be available for use. Cyclists can bring their bikes into them. They will be placed near Franklin and Laurel Streets. The design was approved but Bike Walk RVA said they have been put on hold indefinitely. 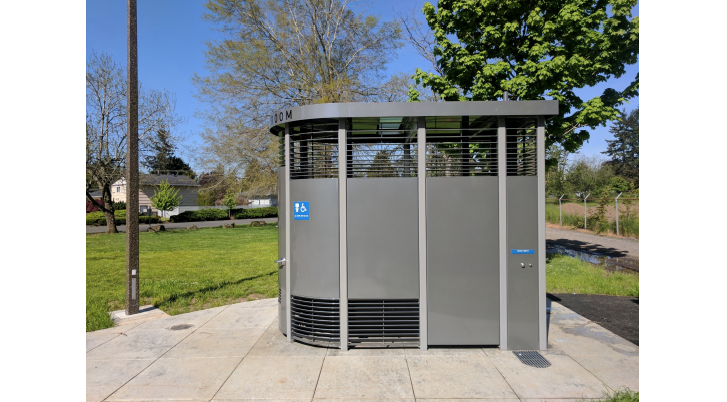