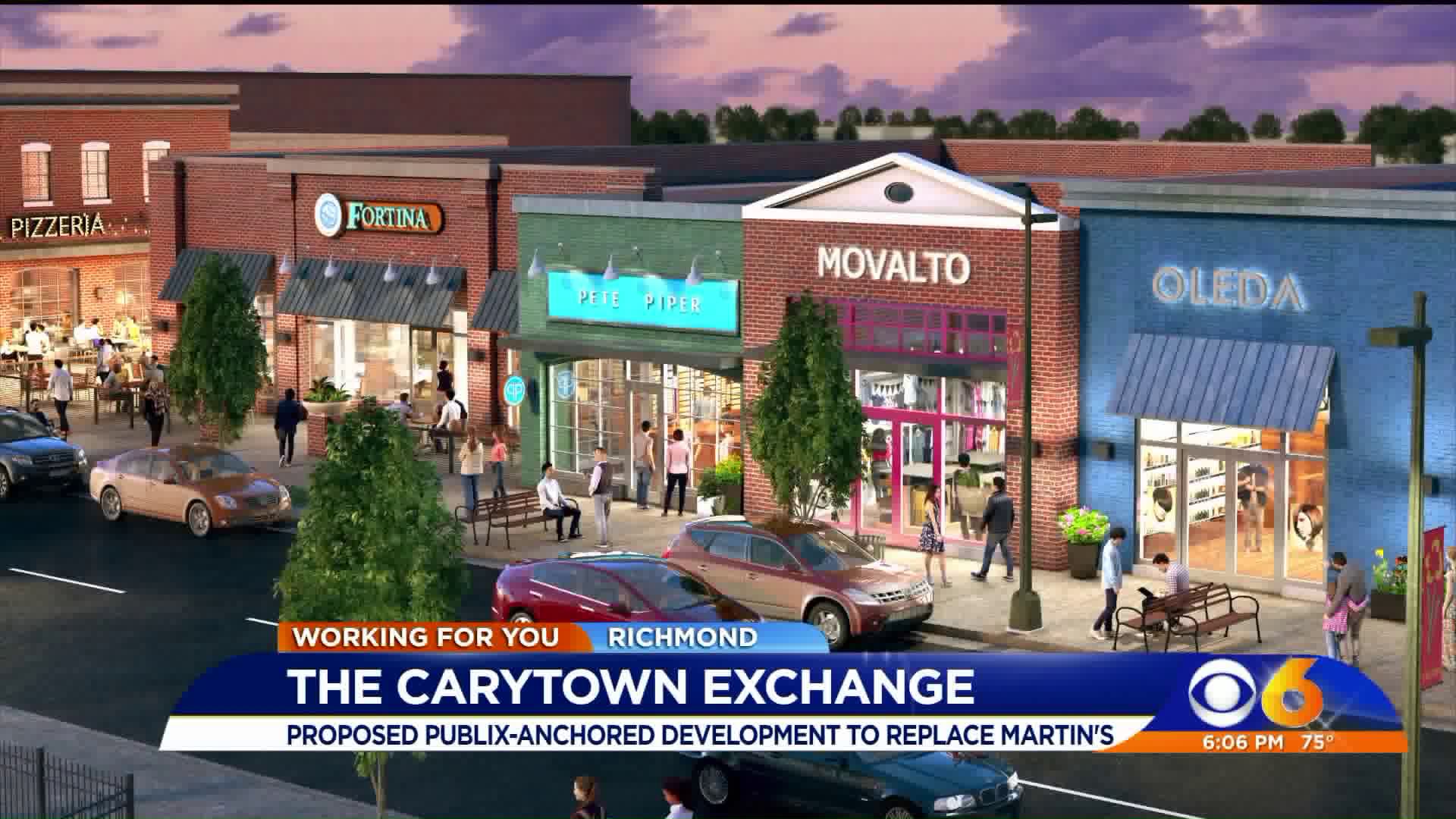 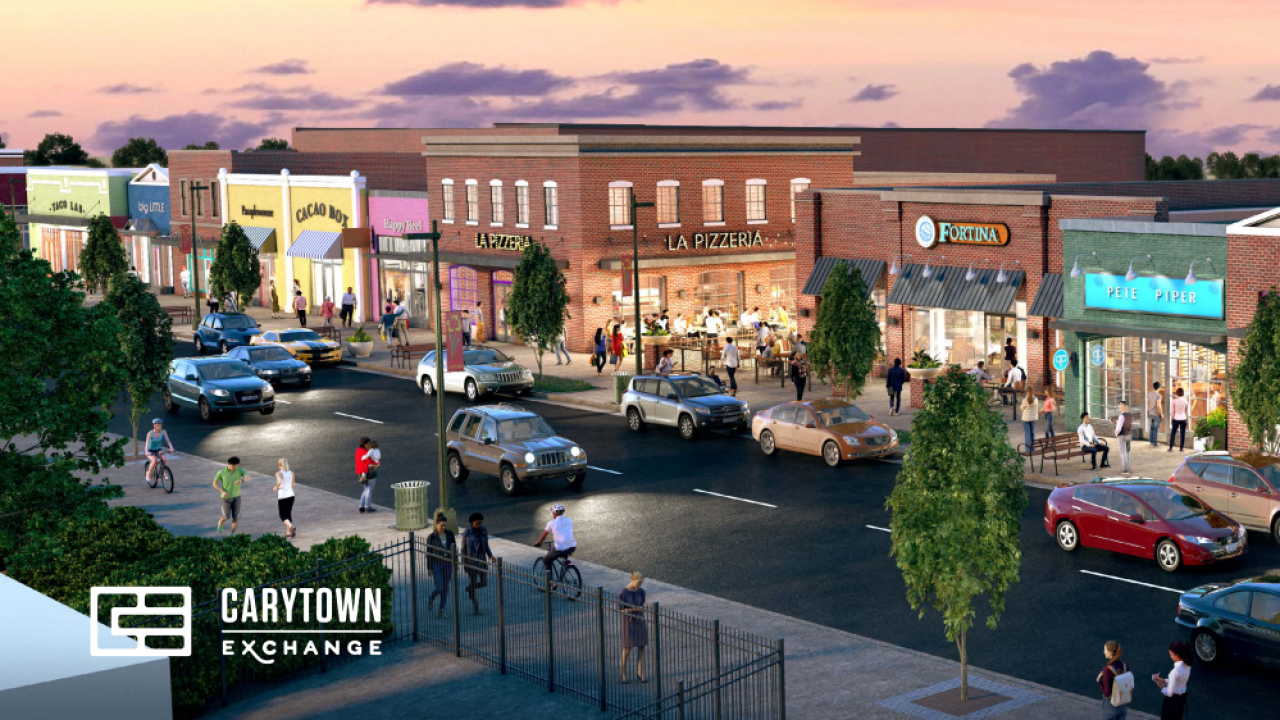 RICHMOND, Va. – Ten months after the Martin’s Food Market in Carytown closed, and shop owners in the surroundings buildings started to relocate rather than endure an indefinite limbo, Florida-based Regency Centers released design plans for the proposed Publix-anchored “Carytown Exchange.”

The designs posted on a website set up to showcase the commercial development, which went live ahead of a public meeting slated for 7 p.m. Tuesday. A marketing brochure, renderings, site plans and a FAQ section are available online.

The $40 million, privately-funded Carytown Exchange will replace the Richmond Shopping Center, which housed local shops on its six-acre parcel --that unfolded over the decades. City tax records indicate that the earliest section was built in 1949, with multiple extensions added later.

This new development will reconfigure the current layout and bring retail shops up along Cary Street, to “engage with pedestrians.” Developers said this design is not intended to be a typical, suburban America shopping center with vehicular focus, however, a lot of thought went into parking accommodations.

"What that allows us to do is turn this project inside out, and celebrate the amenity of neighborhood, which is the street front," said Chris Widmayer, Vice President of Regency Centers.

According to the plans, there will be approximately 520 spaces for parking, between deck and garage parking –an estimated 116 more parking spaces than the current shopping center. The parking for CVS along Nansemond will not change. Bicycle racks will be installed and developers also said they have discussed a nearby bike share kiosk.

The new, 49,000-square-feet Publix store will face Thompson Street. Regency Centers is in final negotiations with Publix to relocate from the lease they have at the vacant Martin’s.

Six separate buildings will have storefronts that face Cary St., S. Nansemond St. and Ellwood Avenue, for a combined 71,000 sq. feet of retail. The average tenant size storefront will range from 1,200-2,500 square feet.

The development project is approximately 20,000 square feet larger than the existing shopping center.

Developers said the project is intended to “reflect the charm and character of Carytown” and the shops will be a “curated mix of local and national, service and retail” to connect with the community. A Publix spokesperson said the developer has a lot of experience with projects like this one.

The architecture will align with the “eclectic nature of Carytown” by utilizing a smaller scale and “love of colors.” Storefronts along Ellwood Avenue and Thompson Street will have a brick facade, to keep with the surrounding style. Cary Street storefronts will be brightly painted. Renderings show space for local mural designs on the stores along Nansemond Street.

Currently, there are 10 access points into the center, including the grocery store loading dock which trucks have to back into directly off of Ellwood. The new design will reduce that number and the grocery loading will be internal to the project.

There will be access points for both ingoing and outgoing traffic from Ellwood and Nansemond Avenues and Cary Street. Outbound traffic will also utilize Ellwood Avenue to exit.

Construction on the first part is expected to start in early 2019 and will include most of the development. The second phase will start in 2020 and should be complete by 2021. Regency Centers anticipates that several retail partners open in the fall/winter 2020, and others will follow into 2021.

Several local businesses who called The Richmond Shopping Center home have already moved out of the space.  Two businesses still operating said they are sad to have to move, but do not hold "ill will" toward the developers or landlords.  Both expressed hope local businesses will fill the new retails spaces, but said they expect leasing costs to be higher once the project was completed.  A representative for one of those businesses said Carytown seems to be trending away from the "homegrown charm" that makes it a unique retail district.

"Local is important to us.  We'll absolutely engage local tenants, and try to work with them and see if this is the right project for them," Widmayer said.  He added that local brokerage firm Thalhimer will work with local business owners interested in relocating to Carytown Exchange.

Regency Centers will manage the operations of Carytown Exchange after the development is completed. They currently manage 26 properties in Virginia, including three properties in Richmond: the Village Shopping Center, Gayton Crossing and Hanover Village.

The public meeting will be held Tuesday, May 8, from 7 to 8:30 p.m., inside the vacant Martin’s Food Markets store.