To infinity and beyond: On board the ‘Toy Story’-themed airplane 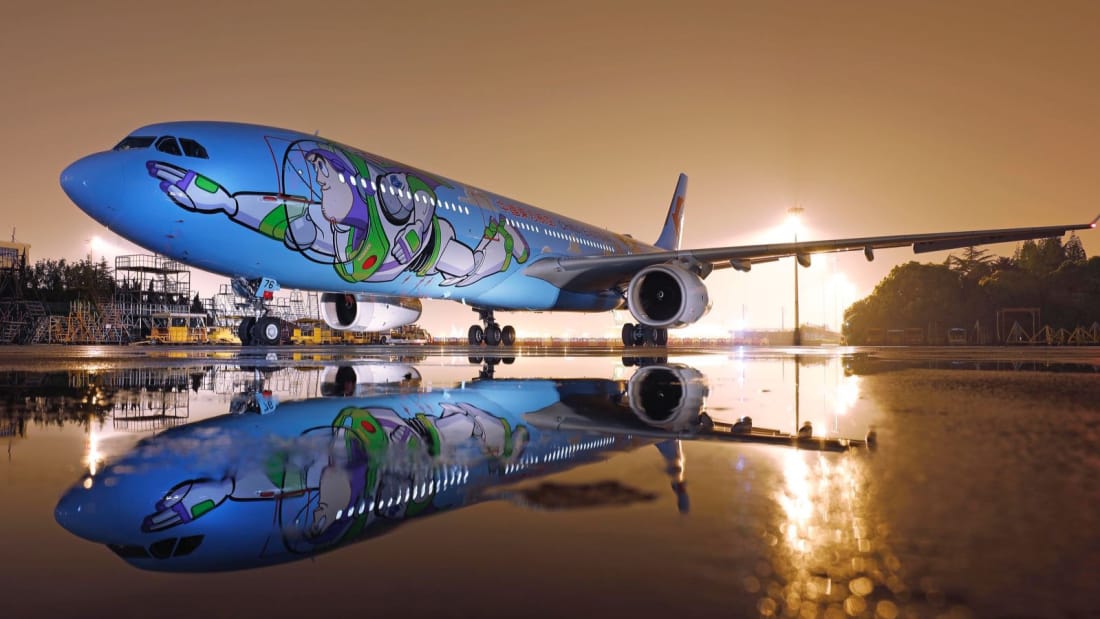 Get ready to travel to infinity and beyond — or at least to Shanghai.

Now you can channel Buzz Lightyear and ascend to the skies in this new “Toy Story”-themed airplane. The playful plane is the product of a partnership between Shanghai Disney Resort and China Eastern Airlines, designed to immerse guests in the world of the Disney-Pixar classic.

The plane will be used on domestic routes. Its exuberant design extends to the interior of the airplane. Large images of beloved characters including cowgirl Jessie and Lotso the bear adorn the ceiling, the seat covers, luggage containers and trays.

Every little detail has a “Toy Story” link — it even extends to menus, cutlery and headphones.

You’ll also get a commemorative boarding pass as a keepsake.

Even the ceiling is decorated. (Courtesy Shanghai Disney Resort)

When you arrive at Pixar Toy Story Land, more excitement will follow — rides such as Woody’s Roundup and Slinky Dog Spin allow visitors to feel as though they’re toys too.

There’s also a “Toy Story” hotel, if you’re after the full experience.

Toy Story Lands can also be found at Hong Kong Disneyland, Walt Disney Studios Paris and there’s an upcoming land on the way at Disney’s Hollywood Studios in Florida.

No word yet on whether more “Toy Story”-fied planes will follow.

The new plane follows in the footsteps of China Eastern Airlines’ past collaboration with Disney, on a Mickey Mouse and Minnie Mouse aircraft.

Elsewhere, you can fly on a super cute Hello Kitty aircraft courtesy EVA Airlines — and back in 2015 “Adventure Time” fans enjoyed hitting the skies on a Cartoon Network-themed airplane from Thai Smile Airways.

If you want to join Woody and co. on board the “Toy Story” airplane, you can fly from Beijing and Shanghai now.

Cartoon Network is owned by the same parent company as CNN.