Martin Luther King’s granddaughter: ‘I have a dream that enough is enough’ 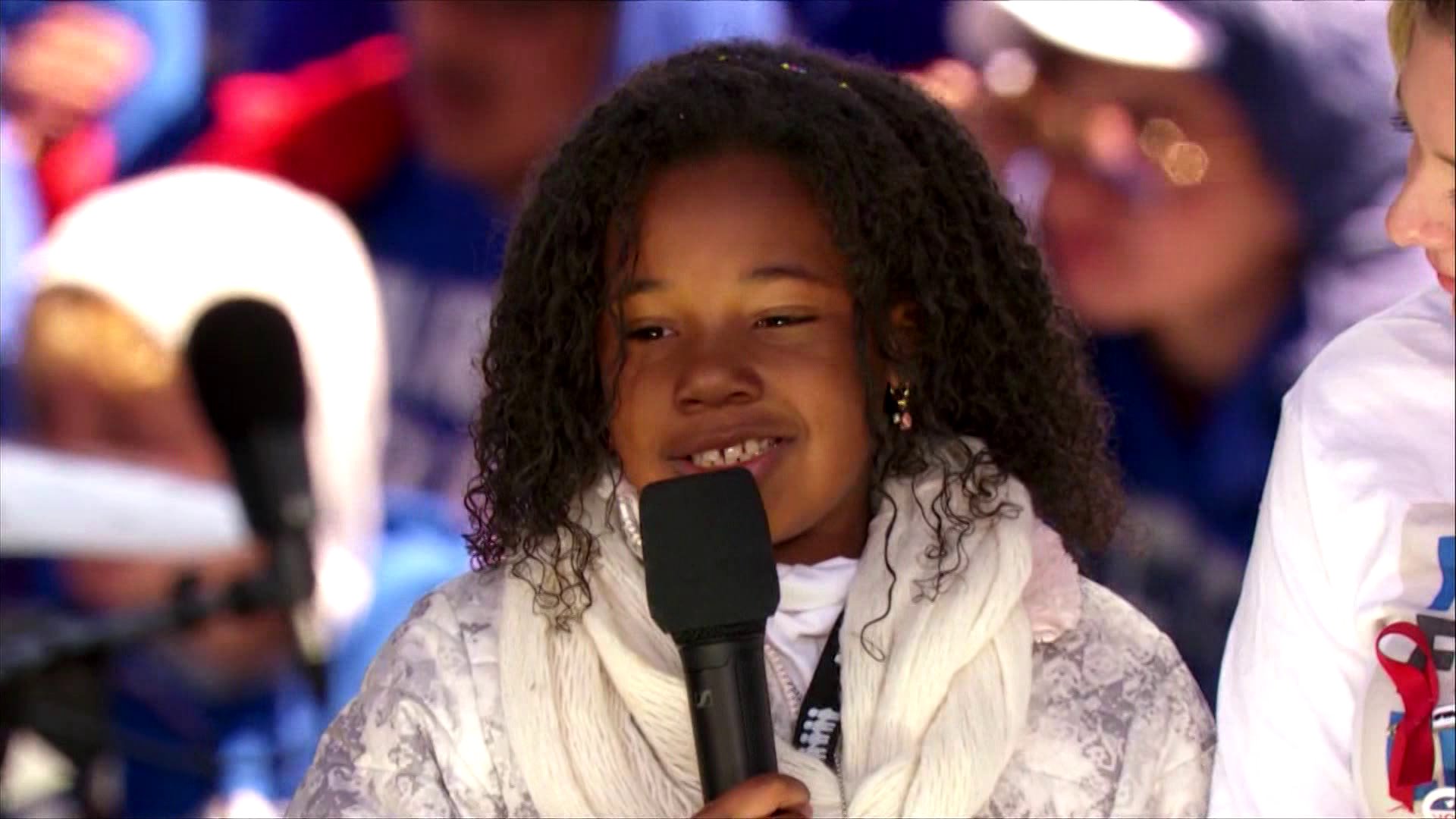 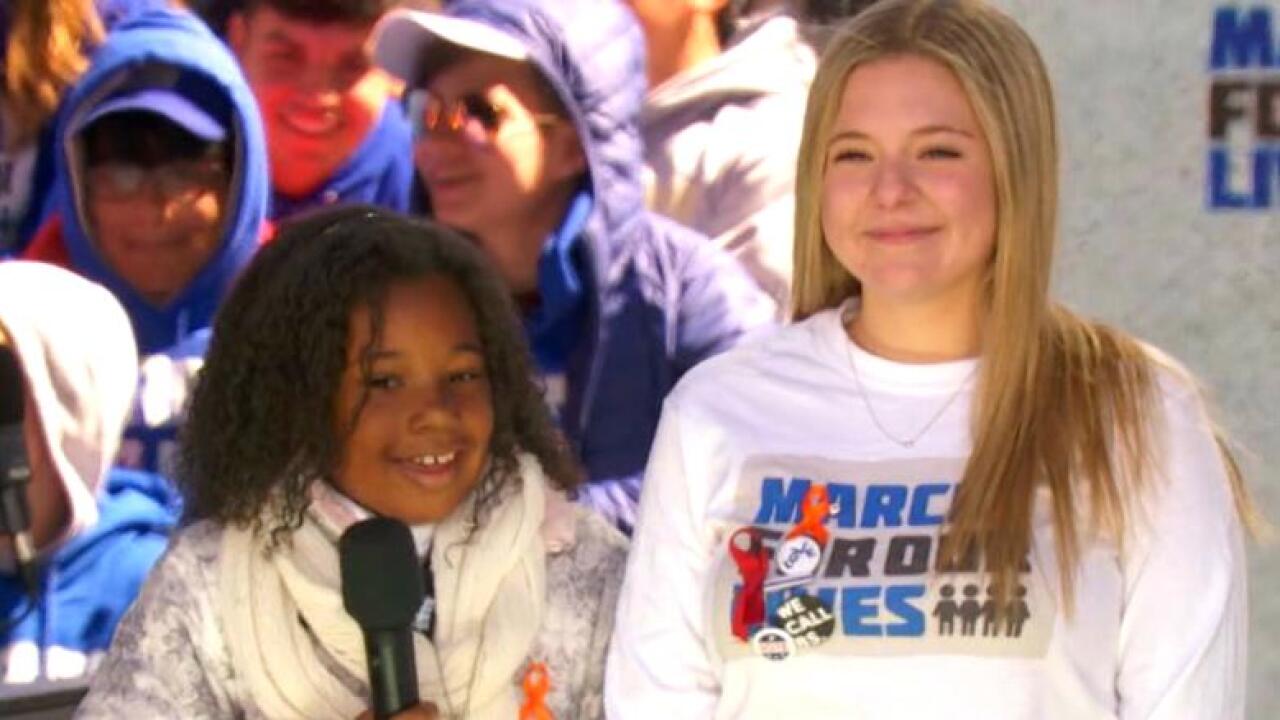 A surprise guest appeared at the March for Our Lives in Washington on Saturday to tell the crowd about a dream her grandfather had.

"My grandfather had a dream that his four little children will not be judged by the color of their skin, but by the content of their character," said 9-year-old Yolanda Renee King, the eldest granddaughter of Martin Luther King Jr.

"I have a dream that enough is enough," Kind added. "And that this should be a gun-free world, period."

King then led the massive crowd in a chant, cheering, "Spread the word! Have you heard? All across the nation, we are going to be a great generation!"

Survivors of the deadly shooting rampage at a Parkland, Florida, high school are leading thousands Saturday in a March for Our Lives on Washington, delivering their impassioned pleas for stricter gun control law to the nation.

Building on the momentum of last week's National School Walkout, these members of a generation raised on gun violence have rallied Americans around their cause while honoring the 17 students and faculty members killed on February 14 at Marjory Stoneman Douglas High School.

The main event started at noon, with participants gathering hours earlier on Pennsylvania Avenue near the US Capitol. As the crowds showed up Saturday morning, the turnout seemed to portend a massive standing-room-only rally.

Hundreds of sister marches were held across the country and around the world as students, teachers, parents, survivors of school shootings and celebrities took their defiant message against gun violence and the gun lobby to the seats of power.

In Washington, speaker and Marjory Stoneman Douglas student Cameron Kasky read the names of classmates and teachers who died in Parkland. The list ended with Nicholas Dworet, who would have turned 18 on Saturday.

"Nicholas, we are all here for you," Kasky said. "Happy birthday."

Another Parkland survivor, David Hogg, told the massive crowd near the Capitol that "you can hear the people in power shaking" with the approach of midterm elections.

"They've gotten used to being protective of their position, the safety of inaction," he said, before issuing a warning to candidates supported by the National Rifle Association.

"To those politicians supported by the NRA that allow the continued slaughter of our children and our future, I say get your resumes ready."

Naomi Wadler, 11, a student from Virginia, said she spoke for all African-American girls lost to gun violence whose stories were ignored by the media. And she warned against dismissing her message because of her age.

"We might still be in elementary school, but we know," she said. "We know life isn't equal for everyone. And we know what's right and wrong. We also know that we stand in the shadow of the Capitol. And we know that we have seven short years until we, too, have the right to vote."

Yolanda Renee King, the 9-year-old granddaughter of the Rev. Martin Luther King Jr., told the crowd that she too has a dream: "Enough is enough."

The youth-led movement, started in the aftermath of the massacre with media appearances by survivors such as Kasky and Emma Gonzalez, has drawn celebrity support.

In New York, former Beatle Paul McCartney told CNN he marched because John Lennon was lost to gun violence in 1980.

Earlier, a normally bustling swath of Manhattan went quiet during a moment of silence as the names of the Parkland victims were read.

In Washington, a teenager drew parallels with the civil rights marches of the past, relishing that he was literally following in the footsteps of icons such as King.

In Boston, march organizers asked participants over age 21 to take their places behind students spearheading the struggle.

Even as far away as Spain, young people such as Lucia Smith, 6, received an early introduction to political activism. She marched with her mother, Aiko Smith, near the US Embassy in Madrid. The girl carried a sign saying: "Your right to rifles. My right to life. Choose."

On a bus with about 250 students bound for Washington from Pittsburgh, chaperone Justin Cooper said he grew up in a region known for hunting but realizes America's gun culture needs to change.

"Our youth are being confronted with these shootings and all the violence, and I think they're looking at it and saying most people support some kind of change ... but yet our laws don't quite seems to be working with the people," Cooper said. "So the youth of this country said, 'Enough is enough.' The kids are running all this."

Carol Speaks sat on the bus next to her grandson, whose brother was gunned down in Pittsburgh in 2013. Three years earlier, she had lost her son to gun violence, she said. Both cases remain unsolved.

"It happens so often in our neighborhoods," she said of gun violence. "These guns are so easy to get. ... A lot of times people don't act on things until it touches your doorstep and then it's kind of late."

In Washington, Leslie Gunn, a teacher who survived the 2012 mass shooting at Sandy Hook Elementary School in Newtown, Connecticut, said her heart pounded with emotion as she prepared to march. Her mind was on the young students and six adults who died at her school.

"We lost 20 children and 6 adults, 154 bullets in five minutes and nothing was done," she said.

"We had voices and we advocated ... but if these kids now can make the voice that makes the change, we have to do this. Adults need to get on board with them and follow them because they're speaking the truth."

"This is not just in Parkland," she said. "It is in every community, especially those of color. ... This is not a moment. This is a movement."

The White House, with President Donald Trump at Mar-a-Lago in Florida for the weekend, released a statement in support of the marchers: "We applaud the many courageous young Americans exercising their First Amendment rights today. Keeping our children safe is a top priority" of the President.

Former President Barack Obama also voiced his support, writing on Twitter: "Michelle and I are so inspired by all the young people who made today's marches happen. Keep at it. You're leading us forward. Nothing can stand in the way of millions of voices calling for change."

The mass shooting at Stoneman Douglas, then the eighth school shooting of the year, moved the young survivors-turned-activists to push lawmakers to address gun violence in American schools with comprehensive gun control legislation, including bans on assault weapons and high-capacity magazines.

"They don't know what it's like to be 20 feet from an AR-15," Parkland survivor Alfonso Calderon, 16, told students at a Washington charter school this week, referring to US lawmakers.

Calderon and other Marjory Stoneman Douglas survivors attended a #NeverAgain -- as their movement is known -- rally this week at Washington's Thurgood Marshall Academy, where two students were killed in separate neighborhood shootings during the last year.

"Every single day you wake up and it might be a thought in your head, 'I might die today,' " Calderon told the students.

"I only had to go through it once. You guys go through it every single day. This isn't a discussion anymore. This is action because that's what we need."

Some Parkland students also met congressional leaders this week at the US Capitol.

"No student should ever have to cover themselves with a deceased classmate to survive, but I was that student," shooting survivor Aalayah Eastmond said.

On April 20, activists are calling for another national school walkout on the 19th anniversary of the Columbine High School shooting.