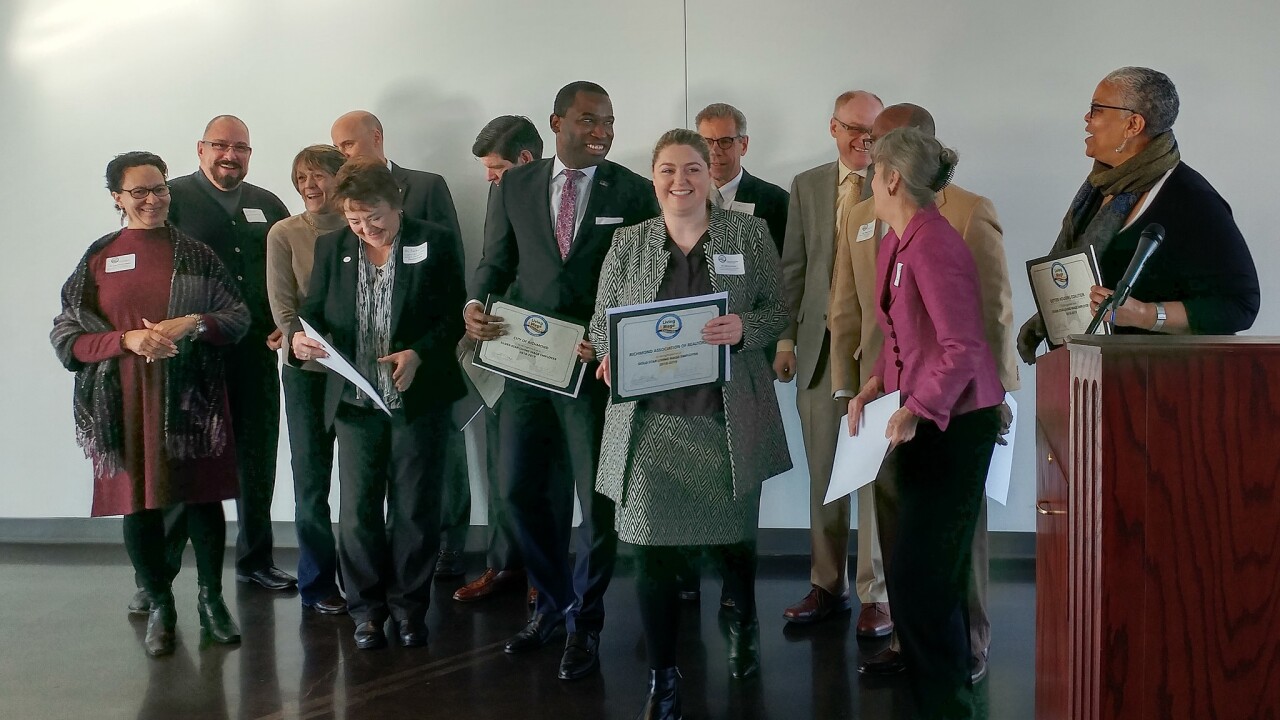 The representatives of the organizations honored at the introduction of the Richmond Living Wage Certification Program (PHOTO: George Copeland Jr.)

The representatives of the organizations honored at the introduction of the Richmond Living Wage Certification Program (PHOTO: George Copeland Jr.)

In a room overlooking snow-covered training fields, the introduction of the Richmond Living Wage Certification Program was mostly an hour of food and celebration for those present. Ten businesses and organizations – including Altria, the University of Richmond and the Better Housing Coalition – were recognized for going beyond the $7.25 minimum required by state and federal governments.

“Yes, jobs are important,” Richmond Mayor Levar Stoney told the gathering. “But jobs that are worked full-time and still leave those workers below the poverty line may help a corporate bottom line, but it will not help someone up from the bottom.”

The living wage program, a joint project of Richmond’s Office of Community Wealth Building and the Virginia Interfaith Center for Public Policy, is the first of its kind in the state. Reggie Gordon, director of the wealth building office, stressed the importance of ensuring that workers are compensated enough to lead a full life with economic stability.

“It’s not an overstatement to say that the people employed by the companies recognized today have a better chance to succeed in this community,” Gordon said.

The Richmond initiative uses calculations from institutions including MIT and the Economic Policy Institute to create a three-tier structure. The highest tier includes businesses that pay a minimum of at least $16 an hour (or $14.50 with health-care coverage). Six of the honorees met that “Gold Star” standard. Employers who have pledged to pay a living wage but aren’t able to yet were also acknowledged.

Richmond Living Wage also encourages the public to patronize employers that pay a living wage. Moreover, the initiative challenges employers that could provide higher compensation but don’t by promoting ethical labor practices like the abolishment of wage theft.

While Stoney praised all involved, the mayor lamented Virginia’s continuing adherence to the federal minimum wage, even as 29 states and the District of Columbia have raised their starting wages.

Stoney said Virginia’s adherence to the Dillon Rule, which prohibits localities from enacting policies that haven’t been authorized by the state, prevents Richmond from raising the minimum wage for all businesses and employers.

Citing his childhood in a “working poor” family and past experience in retail work, Stoney said, “Breaking the cycle of generational poverty is the moral challenge of our time.”

Stoney also noted his proposed biennial budget comes with measures to raise the living wage for all city employees from the current $11.66. If adopted, the proposal would take effect in January. Richmond’s city government was certified at the event as a “Silver Star” employer ($12.50 per hour or $11 with health care).

“Eleven dollars an hour is a good start,” Stoney said. “But $16 an hour is an even greater difference maker.”