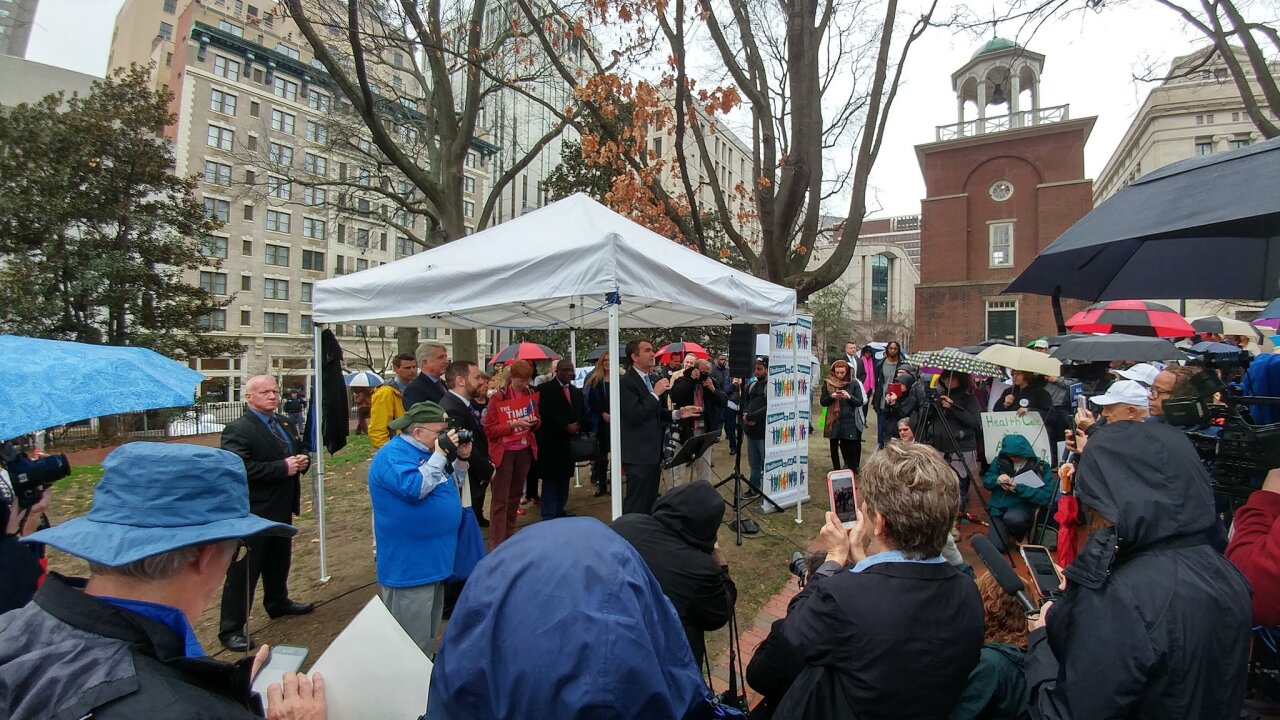 RICHMOND, Va. – Under the shadow of the Bell Tower on Capitol Square, hundreds of people from across Virginia rallied on a rainy Thursday in support of a state budget that would expand Medicaid to about 400,000 low-income residents.

Medicaid expansion is included in the budget approved by the House of Delegates. It also would add a work requirement for those seeking coverage. The budget passed by the Senate would not expand Medicaid. The two chambers must work out their differences and pass a budget before the legislative session ends March 10.

Speaking at the rally, Gov. Ralph Northam said, “Health care is a right. Morally the right thing to do is to expand coverage.”

Northam and other Democrats note that the federal Affordable Care Act encouraged states to expand Medicaid with the promise that the federal government would pick up most of the cost. Neighboring states such as Kentucky, West Virginia and Maryland have expanded Medicaid. Northam said Virginia is losing more than $5 million a day by failing to follow suit.

Northam was joined at the rally by a number of fellow Democrats including Attorney General Mark Herring and Sens. Jennifer Wexton of Loudoun, David Marsden of Fairfax, Lionell Spruill Sr. of Chesapeake, John Edwards of Roanoke and Jeremy McPike of Prince William.

More than 100 groups were represented at the rally, including the Healthcare for All Virginians Coalition, Planned Parenthood, the Young Invincibles and Progress Virginia.

Health Brigade Executive Director Karen Legato pointed to the bipartisan support for Medicaid expansion in the House. She said the state’s charitable clinics are no substitute for Medicaid expansion. Collectively, the clinics can serve only “152,000 of the 505,000 uninsured eligible for our services,” she said.

“We need our government to stand with us – to work with us side by side,” Legato said. “The time is now to ensure that the commonwealth is pro-health and pro-people.”

Christopher Rashad Green of New Virginia Majority, an advocacy group for working-class communities of color, discussed his experience being “trapped in the gap” between access to Medicaid and the Affordable Care Act. He also said he was encouraged to see people at the rally working for “equity and justice and access to affordable health care.”

“I didn’t believe any of this would happen, but now I actually see it happening, and you are proof of that,” Green said. “We have to remain hopeful and vigilant and do uncomfortable things like speaking truth to power. Keep fighting the fight.”

The Rev. Jeanne Pupke spoke on behalf of the Virginia Interfaith Center for Public Policy and “thousands of faith leaders.” She called for an increase in activism from communities and individuals in the days to follow.

A supporter of Medicaid expansion holds up a sign at the rally in Capitol Square. (PHOTO: George Copeland Jr.)

“We can do it if we all go home today and work hard to make our voices heard,” Pupke said. “Our interfaith voices, our unfaith voices, for the commonwealth that is our voice.”

After the rally, members of the crowd walked to legislators’ offices in the nearby Pocahontas Building to urge lawmakers to support Medicaid expansion.

“Keep your energy up, keep your enthusiasm up,” Northam told the people at the rally. “And let’s make sure that in the next week, we expand coverage and make sure that all Virginians have access to affordable and quality health care.”