Nunes vs. Schiff: 5 key areas where they disagree 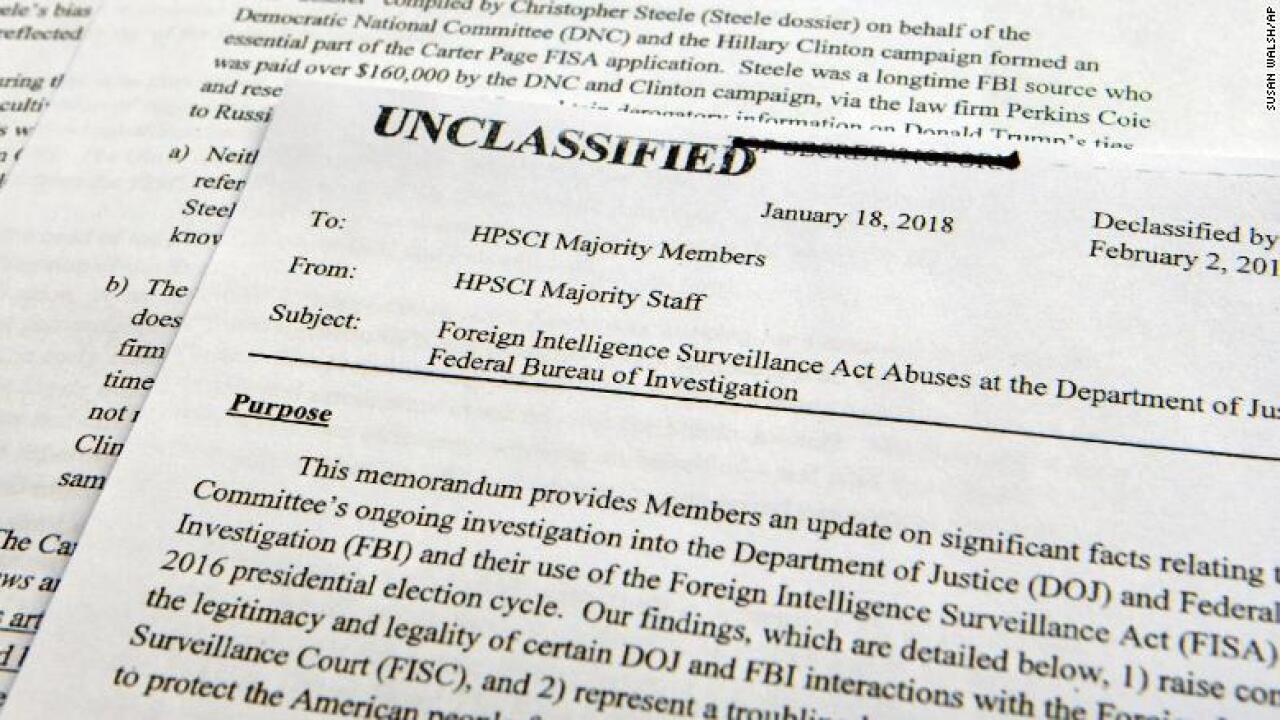 Was the application to obtain a FISA surveillance warrant on former Trump campaign foreign policy adviser Carter Page a major FBI and Justice Department abuse that amounted to politically motivated surveillance? Or was it the proper extension of an FBI counterintelligence investigation into Trump and Russia?

Depends which memo you want to believe.

Saturday’s release of a Democratic House Intelligence Committee memo rebutting an earlier GOP memo alleging FBI abuse of the surveillance process shows just how diametrically opposed the committee’s Democrats and Republicans are when it comes to the FISA surveillance of Page — and the origins of the larger investigation into Trump and Russia now led by special counsel Robert Mueller.

The memo from Rep. Adam Schiff, the committee’s top Democrat, argues that the FISA warrant was properly obtained by the FBI, pushing back against Republican charges that FBI failed to disclose the political motivations of the author of the dossier on Trump and Russia, ex-British intelligence agent Christopher Steele. But the 10-page Democratic memo did not persuade the authors of the initial Republican memo — made public three weeks earlier — as House Intelligence Chairman Devin Nunes’ staff released their own rebuttal to Schiff’s rebuttal memo.

Here are the key points where the memos clash — and one point where they agree — to judge for yourself:

How important was the dossier in the FISA application?

Nunes memo: “The ‘dossier’ compiled by Christopher Steele (Steele dossier) on behalf of the Democratic National Committee (DNC) and the Hillary Clinton campaign formed an essential part of the Carter Page FISA application. Steele was a longtime FBI source who was paid over $160,000 by the DNC and Clinton campaign, via the law firm Perkins Coie and research firm Fusion GPS, to obtain derogatory information on Donald Trump’s ties to Russia.”

Schiff memo: “DOJ’s October 21, 2016 FISA application and three subsequent renewals carefully outlined for the Court a multi-pronged rationale for surveilling Page, who, at the time of the ﬁrst application, was no longer with the Trump campaign. DOJ detailed Page’s past relationships with Russian spies and interaction with Russian ofﬁcials during the 2016 campaign, (REDACTED). DOJ cited multiple sources to support the case for surveilling Page a but made only narrow use of information from Steele’s sources about Page’s speciﬁc activities in 20l6, chieﬂy his suspected July 2016 meetings in Moscow with Russian officials (REDACTED).”

Did the Justice Department tell the FISA court about Steele’s political motivations?

The Nunes memo accused the Justice Department of misleading the FISA court by failing to mention Steele’s political connections to Hillary Clinton’s campaign and the Democratic National Committee. The Schiff memo says the department gave all of the necessary political context to the FISA court, but followed longstanding practice and did not identify the Americans involved by name.

Nunes memo: “The initial FISA application notes Steele was working for a named US person, but does not name Fusion GPS and principal Glenn Simpson, who was paid by a US law firm (Perkins Coie) representing the DNC (even though it was known by DOJ at the time that political actors were involved with the Steele dossier). The application does not mention Steele was ultimately working on behalf of — and paid by — the DNC and Clinton campaign, or that the FBI had separately authorized payment to Steele for the same information.”

Schiff memo: “Contrary to the Majority’s assertion that DOJ fails to mention that Steele’s research was commissioned by ‘political actors’ to ‘obtain derogatory information on Donald Trump’s ties to Russia,’ DOJ in fact informed the Court accurately that Steele was hired by politically-motivated US persons and entities and that his research appeared intended for use ‘to discredit’ Trump’s campaign.”

Why did the Justice Department reference a Yahoo! News article in the FISA application?

The Nunes memo says the Justice Department included a September 2016 Yahoo! News article in the first FISA application in an effort to show additional corroboration of the Steele dossier — even though the dossier information was the source of the Yahoo! reporting. The Schiff memo says the article was cited in the FISA application for a different reason: to tell the judge about Carter Page’s public denials.

Nunes memo: “The Carter Page FISA application also cited extensively a September 23, 2016, Yahoo News article by Michael Isikoff, which focuses on Page’s July 2016 trip to Moscow. This article does not corroborate the Steele dossier because it is derived from information leaked by Steele himself to Yahoo News. The Page FISA application incorrectly assesses that Steele did not directly provide information to Yahoo News. Steele has admitted in British court filings that he met with Yahoo News — and several other outlets — in September 2016 at the direction of Fusion GPS. Perkins Coie was aware of Steele’s initial media contacts because they hosted at least one meeting in Washington D.C. in 2016 with Steele and Fusion GPS where this matter was discussed.”

Schiff memo: “In its Court ﬁlings, DOJ made proper use of news coverage. The Majority falsely claims that the FISA materials ‘relied heavily’ on a September 23, 2016 Yahoo! News article by Michael Isikoff and that this article ‘does not corroborate the Steele Dossier because it is derived from information leaked by Steele himself.’ In fact, DOJ referenced Isikoff’s article, alongside another article the Majority fails to mention, not to provide separate corroboration for Steele’s reporting, but instead to inform the Court of Page’s public denial of his suspected meetings in Moscow, which Page also echoed in a September 25, 2016 letter to FBI Director Comey.”

How much of the dossier was corroborated?

The Nunes memo says the Steele dossier had not been verified when it was mentioned in the FISA application. The Schiff memo does not dispute that accusation — but it does point out that US investigators were later able to corroborate parts Steele’s memos.

Nunes memo: “According to the head of the FBI’s counterintelligence division, Assistant Director Bill Priestap, corroboration of the Steele dossier was in its “infancy” at the time of the initial Page FISA application.”

Nunes memo: “Before and after Steele was terminated as a source, he maintained contact with DOJ via then-Associate Deputy Attorney General Bruce Ohr, a senior DOJ official who worked closely with Deputy Attorneys General Yates and later Rosenstein. Shortly after the election, the FBI began interviewing Ohr, documenting his communications with Steele. For example, in September 2016, Steele admitted to Ohr his feelings against then-candidate Trump when Steele said he ‘was desperate that Donald Trump not get elected and was passionate about him not, being president.’ This clear evidence of Steele’s bias was recorded by Ohr at the time and subsequently in official FBI files — but not reflected in any of the Page FISA applications. During this same time period, Ohr’s wife was employed by Fusion GPS to assist in the cultivation of opposition research on Trump. Ohr later provided the FBI with all of his wife’s opposition research, paid for by the DNC and Clinton campaign via Fusion GPS. The Ohrs’ relationship with Steele and Fusion GPS was inexplicably concealed from the FISC.”

Schiff memo: “The Majority’s reference to Bruce Ohr is misleading. The Majority mischaracterizes Bruce Ohr’s role, overstates the significance of his interactions with Steele, and misleads about the timeframe of Ohr’s communication with the FBI. In late November 2016, Ohr informed the FBI of his prior professional relationship with Steele and information that Steele shared with him (including Steele’s concern about Trump being compromised by Russia). He also described his wife’s contract work with Fusion GPS, the ﬁrm that hired Steele separately. This occurred weeks after the election and more than a month after the Court approved the initial FlSA application. The Majority describes Bruce Ohr as a senior DOJ ofﬁcial who ‘worked closely with the Deputy Attorney General, Yates and later Rosenstein,’ in order to imply that Ohr was somehow involved in the FlSA process, but there is no indication this is the case.”

When did the FBI counterintelligence investigation begin?

Both memos agree: The FBI counterintelligence investigation into the Trump campaign and Russia began in July 2016 — before the FBI applied for the Page FISA warrant — although the context surrounding that date in each memo is markedly different.

Nunes memo: “The Page FISA application also mentions information regarding fellow Trump campaign advisor George Papadopoulos, but there is no evidence of any cooperation or conspiracy between Page and Papadopoulos. The Papadopoulos information triggered the opening of an FBI counterintelligence investigation in late July 2016 by FBI agent Pete Strzok. Strzok was reassigned by the Special Counsel’s Office to FBI Human Resources for improper text messages with his mistress, FBI Attorney Lisa Page (no known relation to Carter Page), where they both demonstrated a clear bias against Trump and in favor of Clinton, whom Strzok had also investigated.”

Schiff memo: “Christopher Steele’s reporting, which he began to share with an FBI agent through the end of October 2016, played no role in launching the FBI’s counterintelligence investigation into Russian interference and links to the Trump campaign. In fact, Steele’s reporting did not reach the counterintelligence team investigating Russia at FBI headquarters until mid-September 2016, more than seven Weeks after the FBI opened its investigation, because the probe’s existence was so closely held within the FBI.”