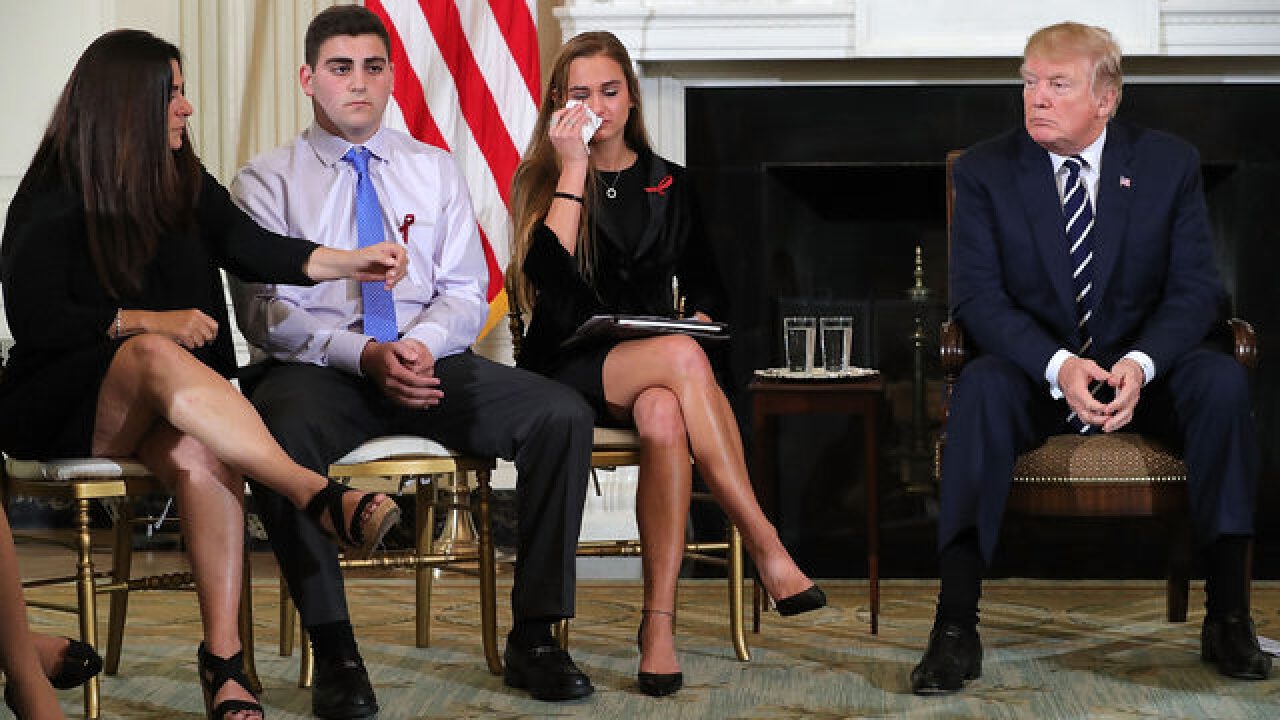 President Donald Trump’s suggestion that teachers should be armed and trained to combat school shooters was widely criticized Wednesday.

Meeting with students and parents affected by school shootings at the White House, Trump listened to emotional stories and pleas to enhance school safety. He suggested that armed teachers might be able to neutralize shooters like the former student who fatally shot 17 people at Marjory Stoneman Douglas High School in Parkland, Florida, last week.

“If you had a teacher who was adept the firearm, they could end the attack very quickly,” he said Wednesday, stating that schools could arm up to 20% of their teachers to stop “maniacs” who may try and attack them.

“I’m not here to debate, but I lost my sister,” said Hunter Pollack, whose sister Meadow was killed in last week’s shooting.

“And like Mr. President said, if you could find 20% of maybe retired law enforcement officers, or a teacher who could go through discreet training to carry a firearm around his waist, it could’ve been a very different situation.”

But not all agreed with that approach.

Nicole Hockley, whose six-year-old son was killed in the 2012 Sandy Hook elementary school shooting, took the microphone and told Trump she would rather arm teachers with ways to prevent shootings in the first place rather than with a firearm.

“Let’s talk about prevention,” Hockley said. “There is so much we can do to help this person before we reach this point.”

American Federation of Teachers President Randi Weingarten condemned the proposal. “I am sickened by those doing the bidding of the gun lobby, and those like President Trump and (Education Secretary) Betsy DeVos who want an arms race and to turn schools into militarized fortresses by arming teachers. Anyone who wants guns in schools has no understanding of what goes on inside them — or worse, doesn’t care.”

The union’s executive council on Wednesday passed a resolution condemning gun violence and calls to arm teachers, according to the statement.

“It’s time for politicians to value children over the gun lobby. AFT members will not rest until we prevent military-style weapons from getting into the hands of people who want to massacre children and educators,” Weingarten said.

“Our students need more books, art and music programs, nurses and school counselors; they do not need more guns in their classrooms,” she said in a statement. “Parents and educators overwhelmingly reject the idea of arming school staff.”

The statement added, “We need solutions that will keep guns out of the hands of those who want to use them to massacre innocent children and educators. Arming teachers does nothing to prevent that.”

David Benke, a retired math teacher, said the solution to the problem isn’t as simple as giving educators guns. He helped restrain an active shooter who wounded two students at a Colorado middle school in 2010.

“I would rather have a school resource officer, usually they’re a sheriff’s officer, in every school,” he said.

“Let’s say you’re an armed teacher and 90% of the time you’re going to be in your classroom with your kids. Something happens. Do you then leave your kids and go bad guy hunting? Pretty bad ethical dilemma to put somebody in.”

Dr. Eugene Gu, a surgical resident at Vanderbilt University Medical Center whose verified Twitter account boasts that he was blocked by @realDonaldTrump, tweeted: “Trump’s proposal during his ‘listening session’ to arm teachers and bring more guns into our schools is beyond preposterous. That’s like saying the solution to lung cancer is to smoke more cigarettes. #ParklandStudentsSpeak”

“We don’t pay our teachers enough to TEACH,” he tweeted. “Now these fools want them to double as armed security. Meanwhile, our kids are the active shooter drill generation.”

Isabela Barry, who survived last week’s massacre by huddling in a closet with dozens of classmates, told CNN’s The Lead Wednesday that she disagreed with the President.

“I feel like arming teachers is just like fighting fire with fire,” she said. “I feel like we won’t get anything done if we just continue to pile on the amounts of firearms.”

Trump also offered other possible solutions during the listening session, calling for more mental institutions and hospitals in addition to arming teachers.

“This would be obviously only for people who were very adept at handling a gun, and it would be, it’s called concealed carry, where a teacher would have a concealed gun on them,” he said.

“They’d go for special training and they would be there and you would no longer have a gun-free zone. Gun-free zone to a maniac — because they’re all cowards — a gun-free zone is ‘let’s go in and let’s attack because bullets aren’t coming back at us.'”