HENRICO, Va. – There have been multiple coyote sightings reported around the Lakeside community in the past few weeks.

The Department of Game and Inland Fisheries (VDGIF) confirmed that they’ve had previous reports of coyotes in Lakeside and emphasized that coyotes can be found all over the Commonwealth. Lieutenant Shawn Sears, with Henrico Animal Control for 21 years,  said that sightings in Lakeside have been reported, but none are confirmed, and there have been no incident reports.

In the past few weeks residents reported seeing them on Ingleside Avenue, Penick Road, Fernwood Street, Dellwood Street, Woodman Road and near Glenside Avenue and Staples Mill. Going back a few months, the roaming animals were reported seen off Hilliard Road, Wilmington Avenue and near the entrance to Bryan Park, at Parkway and Westlake. Lt. Sears said that along Interstate 295 and Route 1 in Glen Allen is a popular place for coyotes, as well as part of east Henrico and Short Pump.

Lt. Sears said that they get calls about coyotes everyday, but most calls are actually about foxes, and that people often confuse the two animals.  He also explained that the both foxes and coyotes call back to one another when hunting and the "howling" often attributed to a coyote could easily be from a fox.

Wendy Fletcher had wildlife experts confirm that the animals she has seen near her house are coyotes. She said that there are about six coyotes living in the woods of the vacant property next to her home, which is adjacent to Lakeside, and off Glenside Avenue. She's frustrated that no agency can do anything to remove the animals, and worried about her pet beagle. The option she has is to call a  licensed trapper or a critter removal service.

“If someone’s dog was loose out here they would be out here in a minute to get it," Fletcher said.

Coyotes, now considered a nuisance species, aren't native to the state  but their population has grown over the past 20 years. Though they prefer semi-forested or open farm and pasture lands, the animals travel along corridors of power lines, easements and bodies of water, according to Lee Walker, with VDGIF.

The first thing a community can do when coyotes are spotted is survey what food source options there are, Walker said. The best way to prevent them from becoming a problem is to not give them a reason to come, he added. Not only should trash be secured and pet food be moved inside but examine all available food sources. For example, rodents, a coyote’s main source of prey, eat birdseed.

Though they are typically nocturnal, Walker said that coyotes can be spotted in the day in urban and suburban areas.

One woman who spotted a coyote off Ingleside said that several months ago her dog was attacked in the backyard, but she thought at the time it was a raccoon. She warned others to take precautions with their smaller pets. In July 2016, a toy Cockapoo was killed by two coyotes in the front yard of his home at Westover and Forest Hill.

Lt. Sears said that coyotes do get a bad reputation for running around killing pets but emphasized they mostly eat rodents. 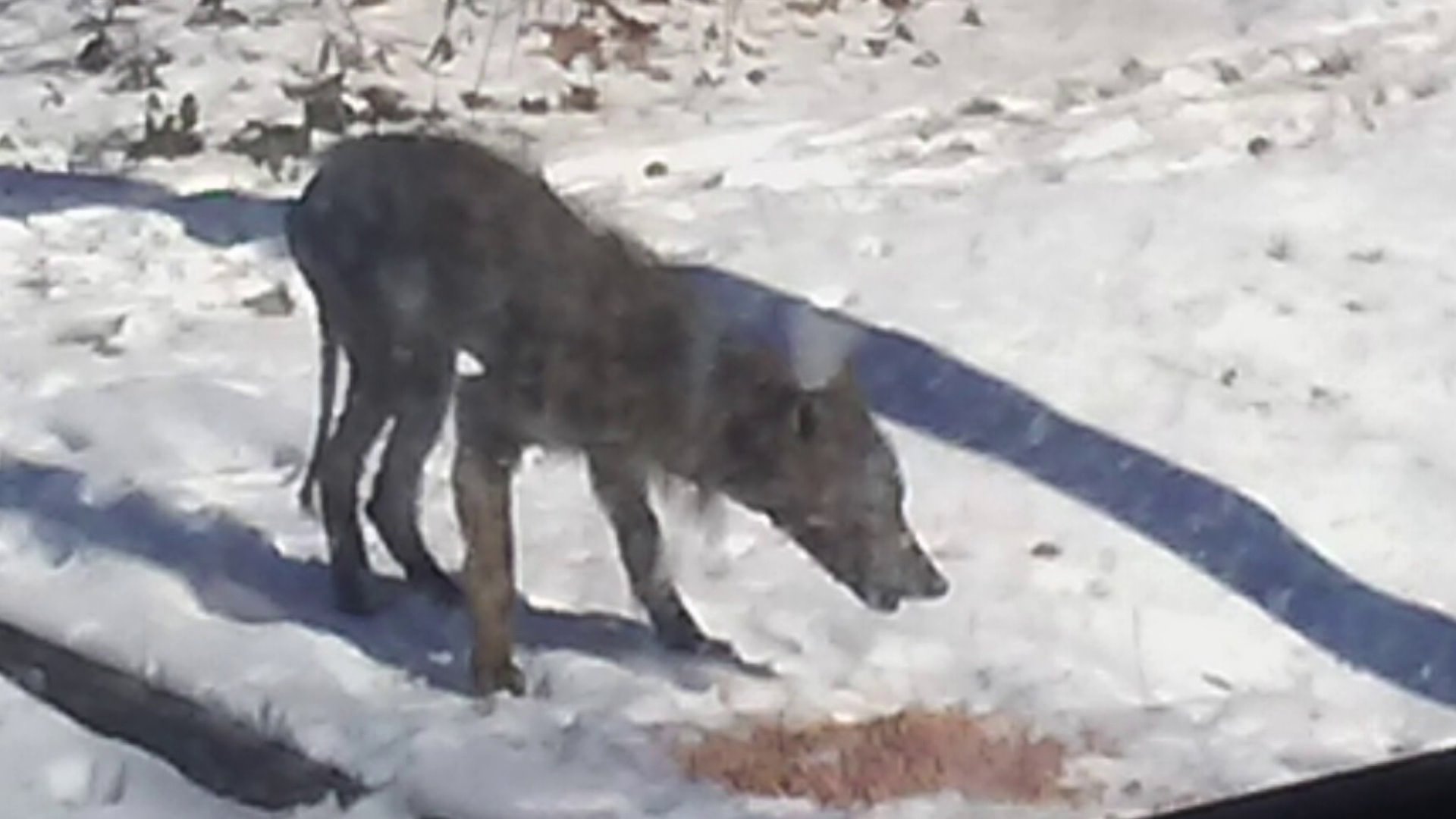 According to Walker, even though a fence may dissuade coyotes from attacking your pet, coyotes can jump over fences less than 7-feet high and can climb over taller fencing that does not have an outward slanting overhang.  Another step is to close up all openings under and into your buildings. Animals look for places to den and raise their young, according to Walker.

The coyote is legally classified as a nuisance species with a continuous open season. No kill permit is required from VDGIF, but residents must contact the Commonwealth Attorney’s office regarding legal methods of animal removal. VDGIF first recommends removing food sources and cleaning up brush piles. If that does not work and the animal continues to be a nuisance or hangs around, VDGIF recommends a professional nuisance wildlife trapping company.

Coyotes are about the size and weight of a medium-sized dog, but with thicker fur and a long black-tipped tail. The fur of the coyote in Virginia can vary from blond, light reddish-brown or tan, grayish black, or black with a small white blaze in the center of the chest, according to VDGIF.  Female coyotes weigh on average 30  to 40 pounds, and male coyotes weigh on average 35 to 45 pounds, but can weigh up to 60 pounds.

If you spotted a coyote in your neighborhood recently, or have a picture to share, click here.

Lt. Sears also recommended that residents experiencing a problem with wildlife, call the toll-free wildlife conflict helpline at 1-855-571-9003. It is operated five days a week, by biologists who can offer advice.

Below is a list of recommendations shared by Walker: