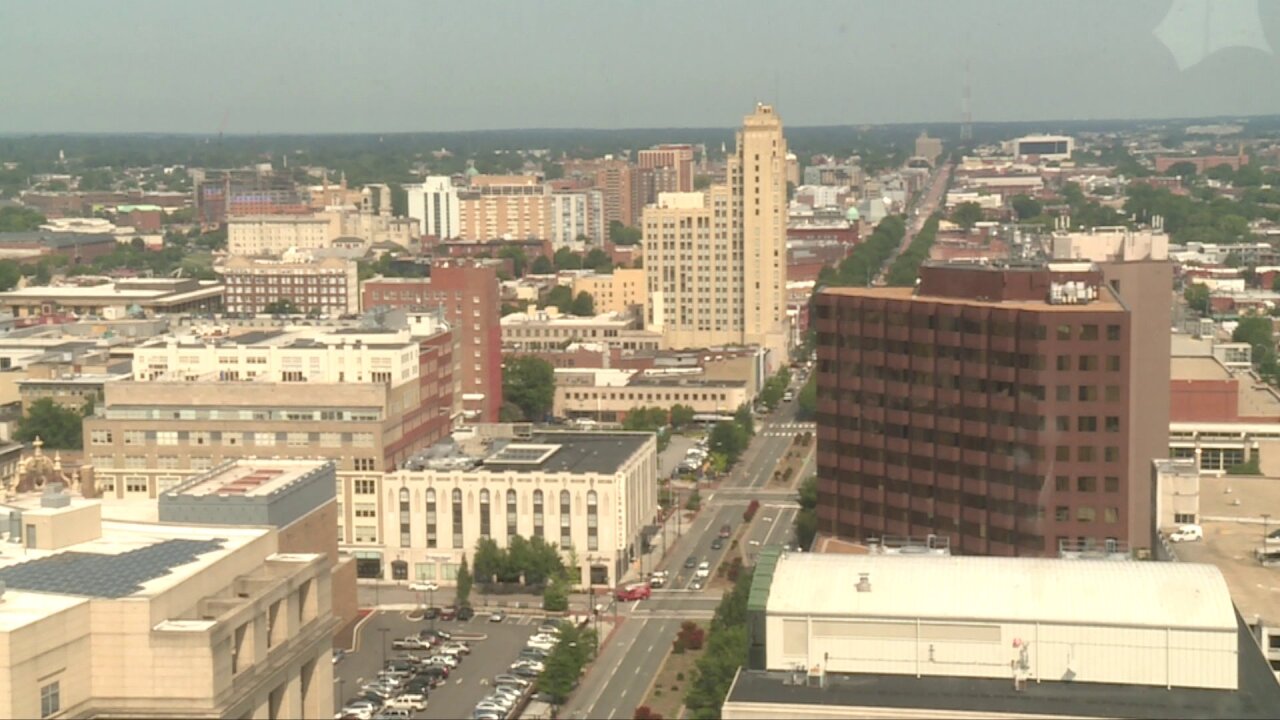 City of Richmond from city hall.

RICHMOND, Va. — Numerous publications have spotlighted the River City over the past five years.

“While you weren’t looking, Richmond got cool,” wrote travel guidebook Frommer’s in 2014, when Richmond made the “Frommer’s’ Top Destinations for 2014.”  Then in 2016 Richmond was ranked #3 on Travel + Leisure’s list of Best Places to Travel in 2016.  Other publications have also focused on Richmond’s culinary and craft beverage scene; The Washington Post, New York Times, Garden & Gun, and Southern Living to name a few.

The booming investments in Richmond show the city and surrounding counties continue to prosper from local entrepreneurs, development, and a fervid interest in arts, culture, history, food and craft beverages. The latest write-up about Richmond was found on CNN’s front page Monday. They definitely hit on some of the highlights in the city, and score points for coming out of the gate calling Richmond “RVA” and shouting out the RVA Mural project.

We do give pause about the line “locals credit Ardent Craft Ales with kicking off the trend” when it comes to craft beer. Not only had Legend been going strong since 1994, but Legend, along with Hardywood Craft Park, lobbied for SB 604 which gave breweries the ability to sell beer for on-premise consumption without having a full-service restaurant.  THAT’s what created a beer boom. Then Isley Brewing helped push for zoning changes in Scott’s Addition and was the first brewery to open in the now booming beer district, and Ardent opened there a year later — though the founders had been home-brewing out of a garage years before opening.

That said, congratulations to everyone who was featured in the article!

The CNN story ( we are re-posting as affiliates):

Richmond, the capital of Virginia, is about a two hours’ drive from the nation’s capital of Washington, D.C., and an hour from Charlottesville, home to the University of Virginia and one of America’s quintessential college towns.

In fact, Richmond wasn’t even the first choice for the state’s capital — Jamestown and Williamsburg had the honors first. And yet, this Southern destination is no longer content to stay in the shadows of its neighbors.

Thanks to a buzzy craft beer scene, a loyalty to homegrown and locally owned shops and an award-winning boutique hotel, the city known as RVA is having a bona fide moment. Here’s what you need to know before you travel there:

Trying to decide where to stay? Richmond is known for its pretty brick row houses, so if you want the full colonial-era experience look for an Airbnb in Carytown or The Fan, both of which are near the city’s major museums. Or go a little grittier in up-and-coming Scott’s Addition, where you can walk to bars, distilleries, breweries and even meaderies without having to choose a designated driver.

Speaking of those museums, start at the Virginia Museum of Fine Arts, which is — score! — free to visit, unless you want to see one of the special exhibits.

The primary collection is plenty stunning in its own right, though — highlights include a huge selection of Art Deco and Art Nouveau pieces as well as a gorgeous sculpture garden with pieces by artists like Dale Chihuly.

Next door is the Virginia Historical Society. As you may have guessed from the name, it focuses on state history with exhibits on everything from a display of weapons to a deep dive on the state’s silver production history.

A short walk away is Cary Street, the main drag of the fashionable Carytown neighborhood.

The street is lined with mostly local businesses, and while it may feel overwhelming, there are a few standouts. They are Chop Suey, a new and used bookstore with an emphasis on local authors; Merrymaker Paper Company, a stationery and paper goods shop; and World of Mirth, a toy and game store that really does live up to its moniker.

However, not all the great art in Richmond is inside a building. The local street art scene is huge, and nearly every street has something to show off. If you’re not sure where to get started, check out the work from the annual Richmond Mural Project.

Virginia’s long agricultural history means that farm-to-table is a given.

Rappahannock, named for the nearby river known for its oyster beds, is a no-brainer for fresh oysters as well as for grilled octopus, paella and other fishy delights.

On Cary Street, the French brasserie Can Can is the best place to stop and refuel post-shopping, with pitch-perfect moules frites, croques-monsieurs and white wines, plus gorgeous brass-and-white decor that Coco Chanel herself couldn’t find fault with.

If you’re downtown, get brunch at nouveau Jewish deli Perly’s, which mixes traditional Jewish cooking with hipster faves on dishes like the Jack Benny (eggs Benedict with latkes swapped in for English muffins) and have a romantic dinner at Saison.

Richmond’s craft beer scene is on fire, especially in the formerly-industrial Scott’s Addition neighborhood. Make your first stop Ardent Craft Ales, which many locals credit for kicking off the trend. Then stop in at The Veil, which focuses on daring and hop-heavy brews, or lighten things up a touch at Blue Bee, the city’s first urban cidery.

Stop for a lunch break at Brenner Pass, which gets its name from the pathway that connects Italy and Austria in the Tyrol region. The Alpine-inspired food — think fondue, root vegetables, rich cheeses — is hearty, and the minimalist decor pairs beautifully. Grab a coffee to go from the next-door cafe, aptly-named Chairlift.

Richmond’s history extends far beyond the capitol area. Check out the Altria Theater, a Moorish Revival building dating to the 1920s that was formerly known as The Mosque.

There’s also the Library of Virginia, which in addition to being a library, has exhibits on topics like women in state history and a connecting store called The Virginia Shop, which sells work from primarily local artisans and trains developmentally disabled people to work there.

Near the capitol is St. Paul’s, an Episcopalian church now listed on the National Register of Historic Places. Highlights include a series of Tiffany-inspired stained glass windows and a stunning gold-and-wood organ.

Finally, the Lewis Ginter Botanical Garden, which is technically in the neighboring town of Henrico, is a 50-acre sprawl of trees, fountains, flower beds and gardens. The rose garden is a can’t-miss, and there’s plenty to see and do even in the winter: Head to the glasshouse to see orchids and then have afternoon tea.

Some hotels are great places to sleep. But some hotels, like Richmond’s year-old The Quirk, feel like a fully inclusive resort experience in the middle of a city.

The hotel is shameless about its love of the color known as “millennial pink,” which is everywhere–coffee cups, couches, mini-fridges and in-room white noise machines–and yet doesn’t feel twee or invasive.

But with all the amenities–which include a downstairs art gallery, Quirk Gallery, a lobby coffee shop, a rooftop bar, a gift shop with carefully chosen jewelry, bath bombs and scented notecards (yes, much of it is pink) and a top-notch restaurant called Maple and Pine, no one would blame you for just staying put and never going outside.

… You really should, though.