Who is Caleb? Mystery signs inspire dozens of runners on race day 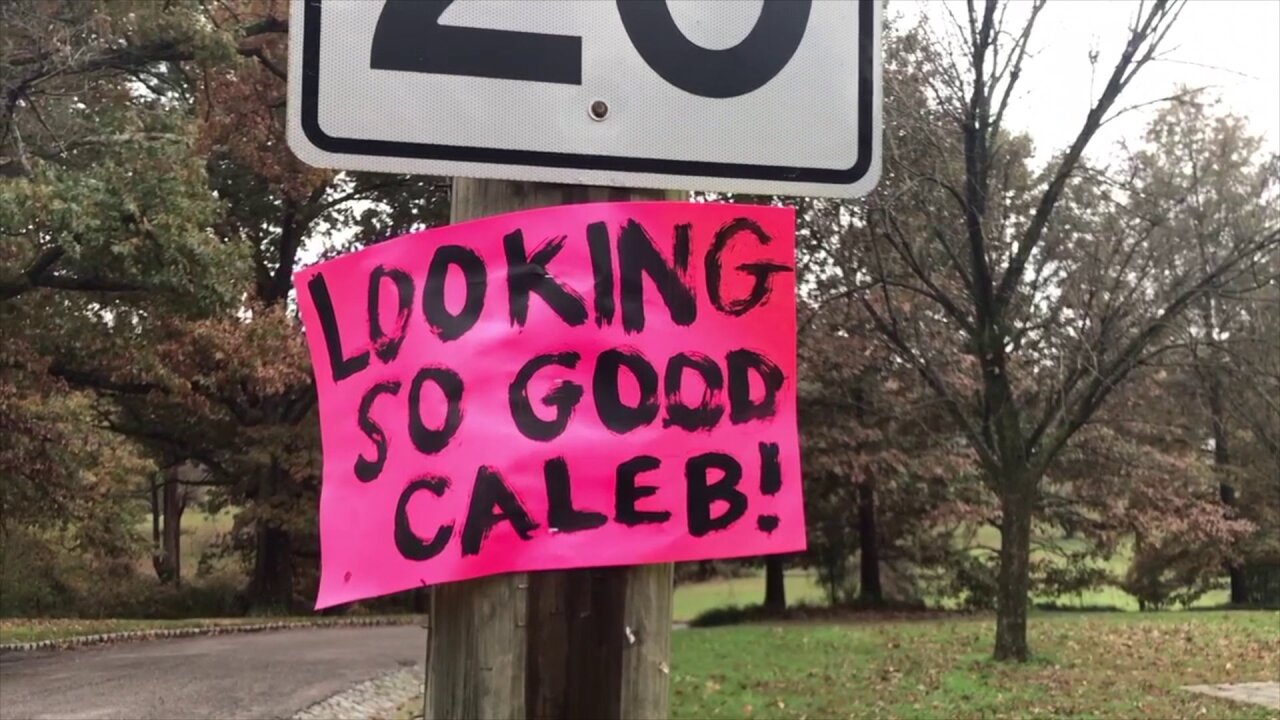 RICHMOND, Va. –  Runners will tell you that course signs on race day help to break the monotony and distract from the (sometimes painful) challenge of a long run. On Saturday, signs made for one runner wound up inspiring dozens of other runners and left people wondering “Who is Caleb?”.

About six weeks ago Caleb Harris and Leah Schubel committed to running the Richmond Markel Half Marathon and started training together. Harris, 27, ran cross country back in high school, and had previously run a 13.1-mile race – though it had been awhile. Schubel, 26, is an experienced runner and has coached cross country.

Regardless of their experience, neither one was prepared for the frigid temperatures a cold front blew in just in time for the Saturday race.

“It was the coldest day, by far, compared to any day of training,” Harris said. “It was a little bit of a curveball.”

Thankfully, Harris was able find some motivation, thanks to Schubel’s secret shenanigans the night before the big race.

Schubel took 12 brightly colored pieces of poster board, cut them in half and used black paint to write out positive messages. Then she stealthily stapled them to posts along the 13.1-mile route.

The first one was about a half mile in, along Broad Street, and they were posted about every half-mile for the first four miles -- and then throughout the course.

The signs had different expressions of encouragement, and were positioned strategically.

“Every time it’s an extra boost of motivation, especially when you see how each one was strategically placed – like 'keep up the pace' as you’re about to go up a big hill,” Harris said. “Honestly just having that routine encouragement made me hold myself to a higher expectation.”

The signs helped Harris the most along the three-mile stretch from around mile 9 to 12 of the course, which is a long, flat stretch of Brook Road, down Lombardy and over to Grace Street.

He was also pleased to note that he began to read other signs in anticipation and appreciate the festivity of the whole event. "Drawing my attention to the fact that there were signs was an aspect of humor to see what everyone else was doing," he said.

There was also an 8K race and the Richmond marathon which ran along some overlapping sections of the route that day, and the signs wound up inspiring more people than just Caleb.

Some people exchanged his name with theirs for motivation:

“Those signs were a big help to us non-Calebs.”

“Those signs are great, and certainly kept me going too.”

“I started calling myself Caleb.”

“His friends/family have this support thing down.”

“I was dreaming that Caleb was pushing me up that hill.”

More than one Caleb used the signs for encouragement.

“I’m returning to competitive running, and at 35 years old, I’ve been wondering if I’m past my prime, said Caleb Keiter. “So when I saw the sign that said, ‘You’re still in your prime, Caleb,’ I laughed out loud.”

“I thought for sure someone had made that sign for me,” Keiter said.

People weren't just discussing the signs on social media. The next day at one church, discussion swirled around the backstory. The consensus was it must have been a family member who thought it was too cold to stand outside and cheer for Caleb.

Schubel was happy that everyone enjoyed them.

“There are a lot of times I’ve done nice things for people and no one appreciated it,” she said. “It was good to know it helped other people even though it was personalized for someone else.”

“I thought it would be the extra boost we needed,” she added.

In the end, Harris crossed the finish line with Schubel, and came within one second of his personal record. They ran at an overall pace of 7:51/mile. He said she was holding back though, and “could put him to shame.”

That’s okay, Schubel has plans for them to run the Monument 10K.

“Then it can be a real race,” she said, smiling. “Not just a fun, encouraging race.”