These Richmond chefs are sharing their Thanksgiving turkey secrets 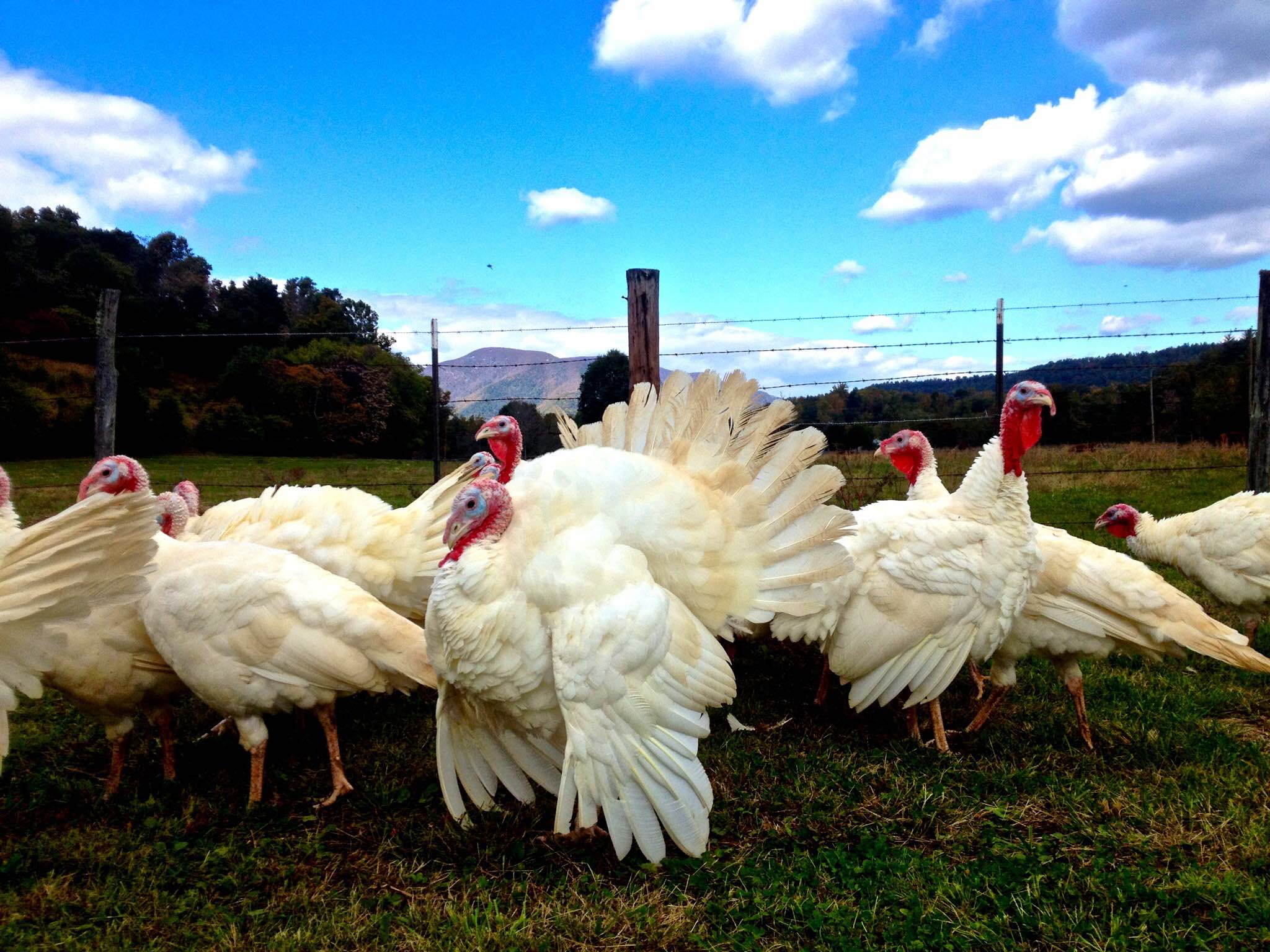 It’s the second week of November and if you haven’t gotten yours yet, well, take a deep breath. You have some options.

But you need to act fast, real fast.

Are you worried about what your bird has eaten for the last twenty-ish weeks of its life? Did you know that’s the average age of the turkey that graces your table?

How big a bird?

Start with the amount of turkey per person.

One pound turkey per person (unless you want leftovers, then 1.5lbs) is how much Tanya Cauthen, owner and butcher at Belmont Butchery and recent Food Network’s Chopped winner, suggests.

Tanya Cauthen, owner and butcher at Belmont Butchery, suggests one pound turkey per person at your table.

Fresh or frozen turkeys take about two days to thaw.

Make sure your fowl hasn’t been around for a while.

Fresh are a better buy. But check the date there as well, you want it to be as close to when you are going to cook it as possible.

Hybrid turkeys or broad-breasted white, are usually too large of breast to procreate so a good portion are artificially inseminated.

Before you read any further, this type of bird will (likely) be your priciest bird, so if you are on a budget, check the local prices.

Heritage refers to the breed of turkey – like Standard Bronze, Bourbon Red, and Narragansett.

You get what you pay for, however, and a Heritage bird will be lower in salt, fat, and cook faster.

Just like everything else, there are marked difference in birds depending on how they grew up.*

Natural turkey has to have no animal by-product feed, no growth hormones, and no antibiotics except for parasites.

Organic is the same but add free range, zero antibiotics, and their feed is sans animal by-products and also, organic.

The USDA regulates the processing of natural turkeys, but not that of organic, however they both tend to be on the humane side of things. Think no added salt and deep flavor.

“If you are buying from a big box, grocer, look for organic,” Cauthen suggested.

If your budget and time allows, if you are talking to a farmer or local, try a local Heritage breed that is pastured.

“One of the Heritage breeds bred for unique flavor and character (locally, you’ll find breeds like Chocolate and White Holland.),” Scherotter said.

James Lum, co-owner of JM Stock Provisions, said how the turkey is raised can impact the flavor.

“First thing I look for is a producer that practices ethical and sustainable farming which includes 24/7 access to pasture,” Lum said. “[That] makes the greatest difference in flavor. You end up with a bird with much more depth of flavor than your commodity caged birds.”

This turkey is the most familiar and the least expensive;  it’s your common Butterball or Perdue.

This big bird has been stuck, literally, with some sort of fluid. The mixture varies but just assume you won’t need much more salt.

Scherotter warns these type are “the Hollywood eye candy of game birds – they’ve been genetically engineered to look good on a platter, but they have no personality.”

*You’ll also see free range and kosher turkeys (in conjunction with the above or on their own). Kosher means the turkey has to be slaughtered by rabbinic law and brined in salt. For free-range, the turkey was allowed access to the outdoors for 51 percent of its life. This could mean an open door or the turkey was in a field. To discern which, look for “Pastured” for a bird that has roamed about fields. Neither of these distinctions guarantee organic or natural but the likelihood is higher.

Is it too late to buy a turkey?

NO! JM Stock is doing home delivery in Richmond or you can head to their website.

At Belmont Butchery, Cauthen is almost out, so call and beg.

However, most of your local groceries as of now still have birds with Whole Foods being the lowest on stock.

“Little birds are going to be hens – bigger will be Toms,” Cauthen said.

“There is a certain point a turkey is too big – but it’s based on your oven. You need a two-inch clearance from the top if you have the turkey on the bottom rack for the air to circulate. If it’s frozen (even Heritage), brine it – you have ruptured the cell structure and it’ll be mushy if you don’t,” she said.

The biggest hurdle when brining is allowing the bird to drain.

To alleviate, remove from the brine the night before. This lets the skin dry as well, resulting in a crispier texture. You are essentially boiling the turkey otherwise and it will take longer to cook.

“Do not brine a turkey if you are going fry – adding water to a fryer is not smart,” Cauthen warned.

“If you’ve ever eaten turkey, you’re probably familiar with ‘uneven cooking syndrome’: if the breasts are juicy, the legs and thighs aren’t done, and if the dark meat is done, the white meat is cardboard,” Scherotter said.

He suggested braising the legs beforehand and roasting the breasts day of. His recipe is below.

COOKING THE TURKEY AND GRAVY

BRAISING DARK MEAT (ahead of time):

Heat large frying pan until very hot and add oil, then salt the legs, thighs and wings and brown over a medium-high flame in batches until golden on both sides—five minutes or so.

Place the browned meat in a casserole-sized baking dish that can hold everything in one layer.

Discard the pan oil and add the bacon.

Brown and render its fat; put all remaining vegetables and garlic in to the bacon fat to brown, scraping the bottom of the pan.

When the vegetables start to brown and caramelize, carefully pour in a cup of bourbon mixed with a cup of gin. (This will light on fire so stand back.)

Let it light and reduce a bit.

When the flame dies, add the wine or vermouth and remaining bay leaves.

Bring to a boil and reduce by half.

Salt to taste, and pour over the legs, thighs and wings.

Pour turkey stock over until all is covered with liquid.

Cover with foil and bake in a 350-degree oven for 2–2½ hours, until falling-off-the-bone tender.

Pour off and strain the braising liquid. You can do this part up to three days ahead of time. It will keep just fine in the liquid.

For the gravy, place some of the strained braising liquid into a straight-sided cast iron nonstick sauce pan with a HEAVY BOTTOM and heat slowly, skimming extra fat and schmaltz from the top.

Stir slowly with a wooden spoon until tan colored till lump-free and the consistency of thick batter.

Stir a little at a time into the turkey braising liquid, until it looks like gravy.

Taste it for salt.

Add the additional shot of gin and bourbon and simmer for 20–30 minutes, stirring constantly until the flour taste is gone and the alcohol has evaporated.

The breasts should be cooked the same day as the meal, as the breasts take only 30–45 minutes,

If you’re doing the butchery a couple days ahead of time, you might want to brine the breasts, which means you truss them and then submerge them in saltwater (seawater salinity level in the fridge) with brown sugar until you’re ready to cook.

If you typically use other spices, use them here.

Put breasts on a roasting rack in a hot oven (500 degrees) Roast until the internal temperature reaches 130 degrees or, when you stick an ice pick into the center of the end, the juice that comes out runs clear-pink. (A classic rule of cooking is that you can always cook it more…)

Average pricing in Richmond from your local butcher: