Vogel, Fairfax agree on 1 issue – but disagree on most – in Lt. Gov. debate 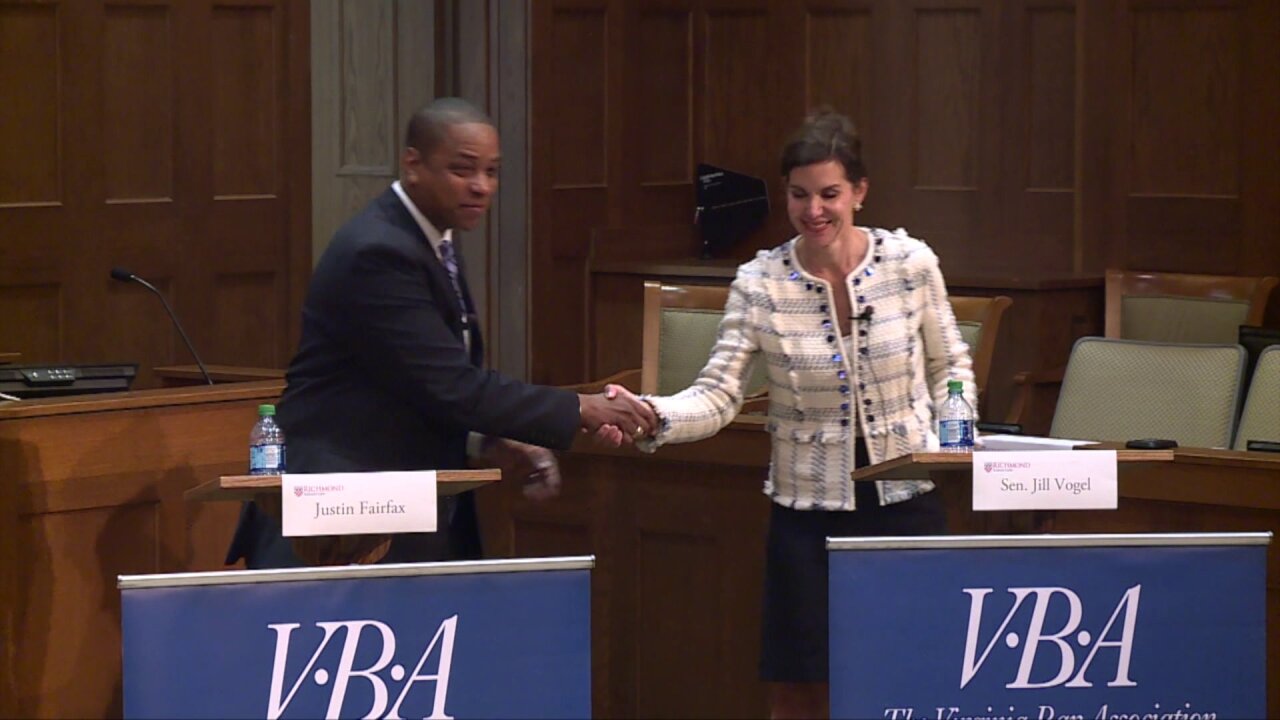 RICHMOND, Va. — Virginia Lieutenant Governor candidates Sen. Jill Vogel and Justin Fairfax squared off in a heated debate Thursday night at the University of Richmond School of Law. The candidates discussed hot-button issues such as gun control, energy, and healthcare in what would be their second and final meeting before the Nov. 7 election.

Fairfax, the Democratic candidate, attacked his Republican opponent for her allegiance with President Donald Trump, while Vogel criticized Fairfax for his lack of experience and liberal ideologies.

The debate began where most of America’s collective mind rests — the Sunday-night shooting in Las Vegas that left more than 50 people dead and at least 500 injured.

Vogel, while denouncing the Las Vegas shooting suspect, stood by her support of the Second Amendment and argued that guns are a crucial means of self-defense for many Virginians.

“I’m not running for lieutenant governor to take anybody’s rights away,” Vogel said. “If you restrict people’s gun rights, it does violate the Constitution.”

Fairfax was quick to point out Vogel’s A+ rating with the National Rifle Association and criticized her strict loyalty to the Second Amendment — something Fairfax said would put Virginian lives in danger.

“Sen. Vogel thinks there should be no restrictions on any type of weapon,” Fairfax said. “She said we need to find out whether or not the weapons (the Las Vegas suspect) used were legal; my point is he was able to fire 600 rounds every couple minutes. Whether or not that’s legal today, it shouldn’t be.”

The discussion then shifted toward fiscal topics like minimum wage and infrastructure before tensions raised during a discussion on abortion. During that discussion, Fairfax brought up a 2012 bill sponsored by Vogel that would have required women getting abortions to submit an ultrasound. Vogel later pulled the bill from consideration.

Vogel responded by questioning whether Fairfax, who has never held elected public office, was informed enough to “talk intelligently” about issues surrounding the campaign.

“You just saw a perfect example of the way Senator Vogel engages in elections,” Fairfax responded. “She said that I am not intelligent enough to understand a piece of legislation…and so what we can expect is for Senator Vogel to keep going in the gutter.”

Vogel claimed Fairfax was twisting her words and that her opponent was issuing personal attacks.

“I did not question his intelligence,” Vogel said. “I questioned how informed he is. I have no doubt Justin Fairfax is very intelligent. In fact he’s an incredibly nice person. I enjoy actually being on the trail with him. But I will question how informed he is on many of these issues and that is why I take the position that he has taken very extreme positions that are incredibly hard for him to defend.”

Tensions remained high as the two candidates discussed what each referred to as the most important topic of next month’s election — healthcare.

Fairfax stood firmly in his belief that all Virginians should have effective, affordable healthcare and argued for the state to accept Medicaid expansion.

“What I believe and what we’re fighting for is that everyone should have access to high-quality healthcare,” he said. “We believe that that should be a right and not a privilege.”

Vogel countered, arguing the cost of such expansion would result in a massive budgetary burden for Virginia. She added that her legislative experience would help her bridge the gap between party lines so that the two sides could come to a mutual agreement that is in Virginians’ best interests.

“I have Democrats who support me; I have Independents who support me,” Vogel said. “I have friends on both sides of the aisle who all work with me and all talk about health policy all the time. I can’t think of where I’ve had any discussions with anybody who thinks having government-run healthcare is a solution.”

The rest of the evening consisted of debates on energy, abortions and judicial appointments — all topics where the two candidates continued to fall short of seeing eye-to-eye.

The sole issue where Vogel and Fairfax were able to find common ground was in their discussion of Title IX. Vogel was quick to voice her support for victims of sexual assault without specifically denouncing the recent comments of Secretary of Education Betsy DeVos.

“I am not in favor of doing anything that walks us back in terms of protecting victims,” Vogel said. “Doing everything we can to protect victims has to be our highest priority.”

Fairfax used this as another opportunity to attack Vogel’s support of the president and his often-divisive policies.

The night concluded with each candidates’ closing remarks, where they pled their case to Virginia’s voters on why they believe they deserve to be the commonwealth’s 41st lieutenant governor.

Vogel stood behind her experience within the Virginia legislature as evidence to her ability to lead the state as lieutenant governor.

“I have worked on these issues for 10 years,” she said. “Leveraging the position of lieutenant governor — strong, statewide leadership with a vision — is what it takes to actually get people on both sides of the aisle to agree to work together.”

Fairfax used his closing remarks to denounce Vogel’s “politics of destruction” while promoting what he claimed was a positive vision for Virginia’s future.

“We can do the things that allow the great American story to be possible,” he said. “It’s a story that I’m passionate about and it’s one that I want us all to live.”

With less than a month left until Election Day, several notable polls around the state show Fairfax leading Vogel by margins as thin as a single point, making Thursday’s debate a crucial moment in each candidate’s hopes for victory in November.

A previous version of this story indicated Mr. Fairfax was a supporter of Sen. Bernie Sanders’ healthcare plan. His campaign later stated Fairfax simply supports a plan to provide healthcare to all Virginians.

By Tyler Woodall and Nick Versaw (Special to WTVR.com)