RICHMOND, Va. -- Nineteen people were cited for Obstruction of a Free Passage during an afternoon protest in downtown Richmond.

Between 30 and 40 pipeline protesters marched from the Bell Tower at Capitol Square to the Department of Environmental Quality offices at 6th and E. Main Street.

Outside DEQ headquarters, the protesters chanted "Shame" at state officials who they said wrongfully support the Atlantic Coast Pipeline.

"This is an area where we are being rocked by extreme weather.  Hurricane after hurricane and the wildfires in the west.  We can't get a break.  We need to tell them to stop right now and leave it in the ground,"  said Jamshid Bakhtiari, Chesapeake Climate Action Network, Virginia Field Coordinator, Central & Northern VA.

"I think it was very disappointing that these groups thought that the best way to support the victims of hurricane Irma was to get arrested.  Our company took a very different approach.  We sent 750 of our people down there to Florida to help with the restoration because that's what our company does.  When there's a crisis, when there are people in need we spring into action.  We help," Dominion Energy spokesperson Aaron Ruby. 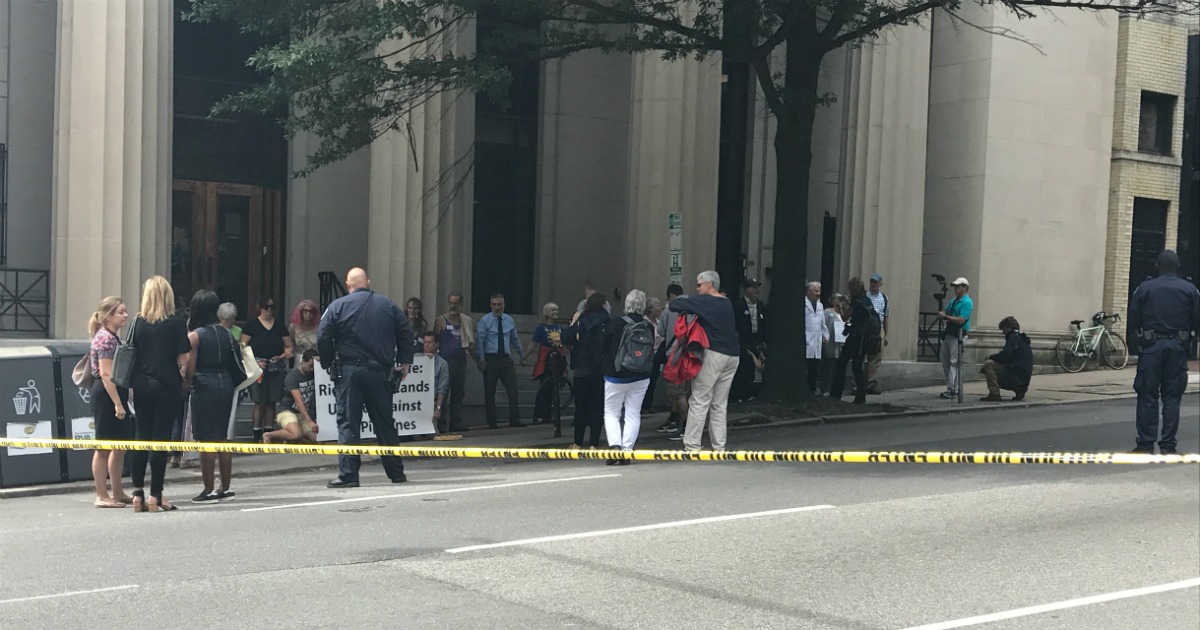 Dominion Energy, which hopes to build the 600-mile natural gas pipeline in parts of Virginia, West Virginia, and North Carolina, said the pipeline is needed to increase "supplies of natural gas to meet the growing energy needs of millions of customers."

"The Atlantic Coast Pipeline will be an energy provider, job creator and economic game changer for West Virginia, Virginia and North Carolina," the website for the project touted. "This underground natural gas transmission pipeline will transport domestically-produced, clean-burning natural gas from West Virginia to communities in Virginia and North Carolina that lack the infrastructure needed to generate cleaner electricity, heat homes and power new industries. Along the way, the pipeline will help the region lower emissions, improve air quality, grow local economies and create thousands of new jobs in manufacturing and other industries."

The downtown Richmond protest was part of a two-day statewide initiative.

Demonstrations were planned at Department of Environmental Quality offices across the state.

If approved, construction on the Atlantic Coast Pipeline is scheduled to begin in 2018 and continue through 2019.

The 19 people cited at Thursday's protest were issued a summons.