White Oak Community Church, which holds services in the ballroom at the Econo Lodge on Williamsburg Road in Sandston, learned last Sunday that they could no longer use the space.

“Upon arriving to our current worship location we found that the building has condemned signs on the door,” reads a Sept. 3 post on the church’s Facebook page. “The only legal use of any of the spaces are for the Econolodge to conduct business. We obviously do not have church this morning.”

Church members were able to remove items from the building and remained optimistic.

“Know that this is only a minor setback,” church leaders posted on Facebook. “Often God sandblasted us out of places in order for us to see the next great thing that he has for His church. A little frustrated this morning, but excited for what God has for our future!” 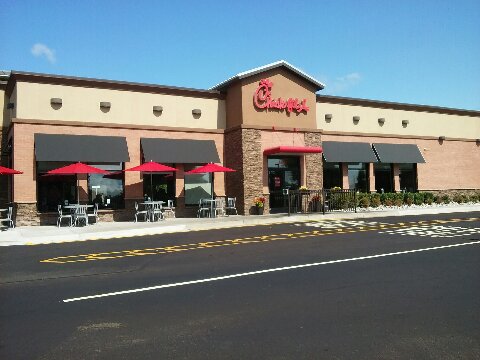 Church leaders held an emergency meeting later that afternoon and one of the board members, who works at the Chick-fil-A at White Oak Village, contacted her boss and he agreed to let the church use the space for Sunday services.

“I did want to send a huge thank you to Greg Williams and Chick-fil-A for graciously agreeing to host us next Sunday,” Lead Pastor Dave Wilde said in a video posted on Facebook.

“No they are not serving food… You cannot order chicken biscuits at Chick-fil-A next Sunday,” Wilde laughed. “So if you’re a current or future attender, and you always wanted to worship in a restaurant setting, this is your lucky day.”

Tricia Turpin Goza, who sometimes attends services at the church, was overjoyed by the news.

“I think it’s awesome that the Chick-fil-A in White Oak is opening its doors on a Sunday to allow a temporarily displaced White Oak Community Church to hold service,” Goza said.

Goza said around 30 people attended services at the restaurant.

“We are actually in the home of the original sandwich. We’re here at Chick-fil-A this morning,” Wilde said in a video on the church’s Facebook page Sunday morning. “We had to make a quick adjustment to our regularly scheduled worship.”

There has been no word yet on where services will be held next week.

“Conversations are being had and emails being traded in regards to our next move,” church leaders said.

Chick-fil-A restaurants are closed on Sundays for employees to “rest and worship if they choose,” according to the company’s website.