“It was an amazing experience,” wrote ER nurse Ashley Apple, while en route to the Dallas airport to head home. “We worked long hours with constantly evolving logistics. We’re beat! But our hearts are full.”

On Sept. 1 the team volunteered at the NRG Center, a large shelter next to the hulking Astrodome, which was condemned in 2008 over numerous code violations after housing victims of Hurricane Katrina.

The NRG Center shelter was one of the dozens that temporarily housed thousands of evacuees. On Friday, Apple relieved the charge nurse who had been on duty for two days straight.

“I coordinated physicians, nurses, students and patients, and worked with FEMA, DMAT, CMOC, Harris County Health Department, and countless other volunteers,” said the 38-year-old nurse, who is also currently enrolled at the University of Virginia.

They helped 100 patients in the urgent care clinic and transferred 15 out via ambulance while at the NRG Center. Patients suffered heart attacks, surgical emergencies, strokes, and more.

Patients ranged in age from newborns to 90 years old and they arrived by the busload, Apple said, “dragging all of their worldly possessions around in trash bags.”

On Saturday, with President Donald Trump visiting the NRG Center, the Richmond team helped the Texas National Guard and helped set-up clinics at staging areas for water rescue and recovery. Later that afternoon they volunteered at the George R. Brown Convention Center, the largest shelter in Houston.

“We met heroes,” Apple said.  “It was so rewarding to know that we helped make a difference in the lives of people who were devastated by this storm. This is what nursing is all about.” 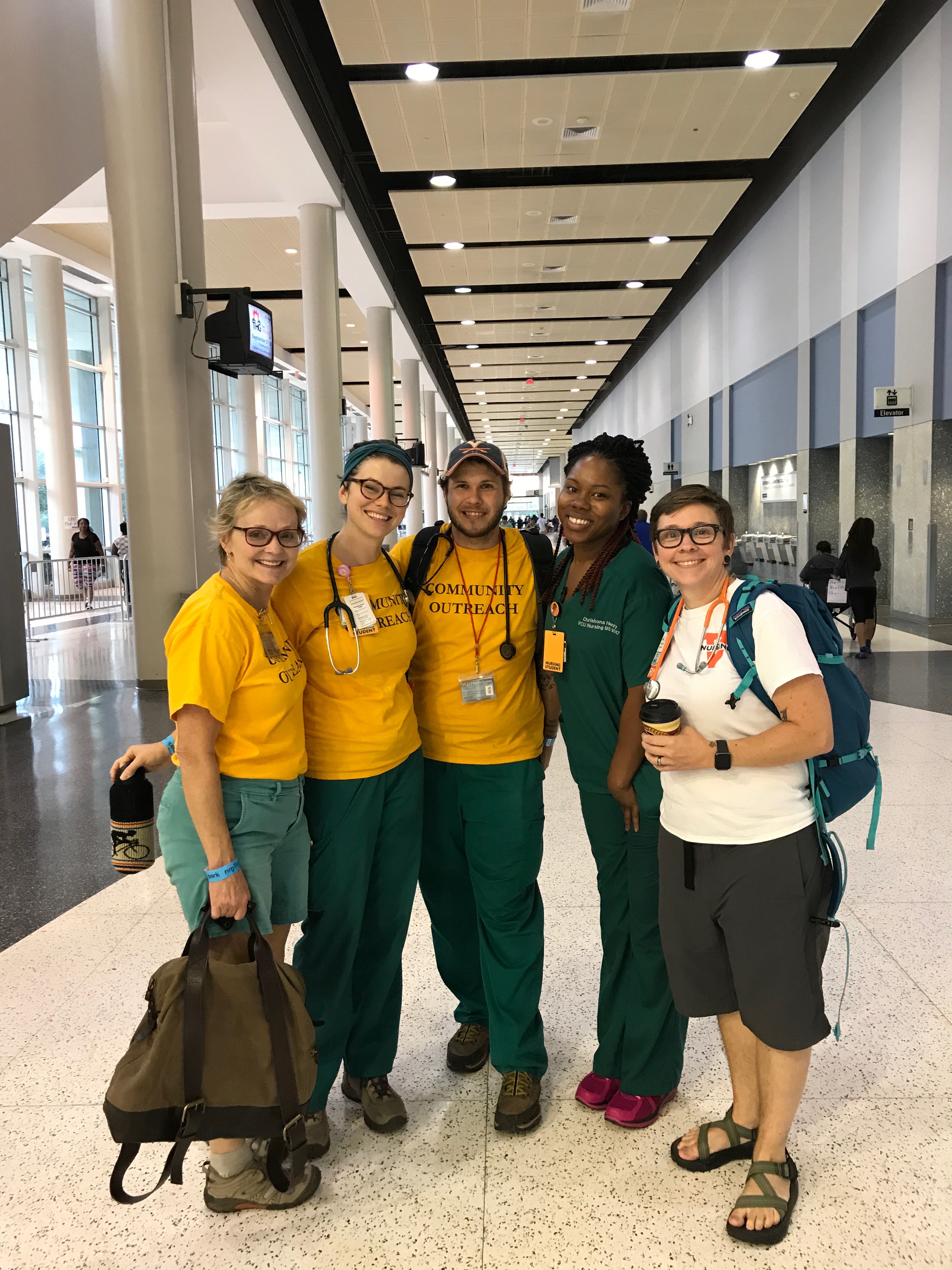 On Sunday the crew headed to Beaumont, a city of 118,000 east of Houston, where the municipal water system failed during Harvey and left residents without running water.

High water rescues were still underway in Beaumont and there was less emergency infrastructure in place than in Houston.

“We passed long stretches of flooded flats- abandoned cars and debris littering the highway,” Apple said. “Spotted two alligators swimming next to the highway just outside a flooded alligator farm.”

The team arrived and set up a clinic and helped provide medical services for parishioners at the Antioch Baptist Church; diabetics who had been without insulin for days, patients whose hypertension had gone untreated, a child who was vomiting.

Later they headed to the Public Health Department, to vaccinate first responders from Beaumont Fire and Rescue after exposure to flood waters.

They administered about 140 injections to firefighters, paramedics, public health officials, and dive teams, work that Dr. Goldschmidt felt was some of the most rewarding.

“Many of these tireless EMT, fire and rescue team members were still wet from water rescues,” Dr. Goldschmidt said. “Keeping them from contracting contaminated water borne illnesses is crucial. We felt honored to be of help to them!”

“Many of these men had their own homes flooded, yet they were still out serving the vulnerable populations of Beaumont,” Apple said.

Headed home Monday afternoon, all facing work or school early Tuesday, they said they were more tired than they have been in a long time – but their hearts were full.

“It sure as hell beats sitting on the couch and wishing I could do more- which is how I felt during Katrina,” Apple said.

Chrishona Henry said the hurricane relief process is far from over, and many residents may be safe now, but their lives will be impacted over the long term – especially those with reduced resources.

“Houston continues to need support and relief as they recover from this disaster, but we also have to pay attention to the rural communities, shelters, prisons and underserved communities that will need assistance too,” said Afton Bradley. “When folks lack adequate resources and access to care in their daily lives, a flood or hurricane has a greater impact and longer recovery time – we must not forget them in our donations, volunteer services, and advocacy, especially when the waters are gone.”

The VCU students are involved in a program called “PROMOTE-Nursing” that aims to increase the number of nurses in community-based clinical sites which provide care to underserved populations.

“I learned a lot as a student that I will incorporate into my future nursing career,” said student Eva Farrell. “As we keep Houston in our hearts and minds over these next weeks, months and even years, let us not forget the smaller more rural areas that were also hit, such as Beaumont, TX, which sat under Hurricane Harvey for four days straight and is still in need of relief and rescue.”

“This experience has taught me a lot about what it means to be a public health nurse,” Henry said. “I also experienced the effects of a nation that helps, cares and supports one another. If we could function like this every day and not just in the wake of tragedy, we could literally be the greatest nation on Earth.

Virginia and Texas are compact states, which honor each other’s nursing licenses. The Texas Board of Nursing waived all registration forms and fees for nurses licensed in compact states that came for relief help.