Chick-fil-A comes to the rescue 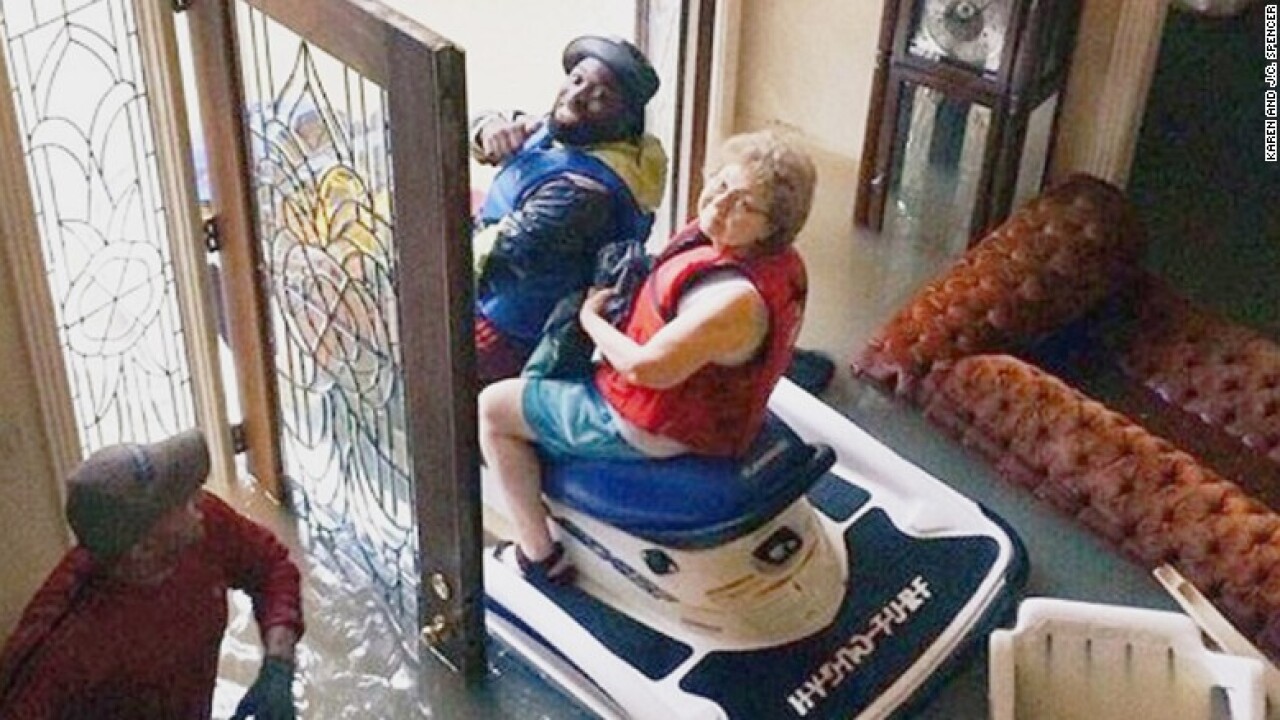 For more than a week, the world watched as grim images from southeast Texas were broadcast on television and social media — homes along the coast torn apart by hurricane winds, inland communities flooded by a record-setting tropical storm.

The full extent of the devastation remains unclear, and FEMA chief Brock Long says the recovery effort will take years.

But if these tragedies have taught us anything, it’s that the sheer will and constitution of Texans and their neighbors are second to none. In the aftermath of Hurricane and Tropical Storm Harvey, communities united and strangers came to each other’s aid.

The numerous stories of courage, generosity and steadfastness in the face of danger and loss prove that in Texas, not all heroes wear capes.

Here are some of those inspiring stories.

J.C. and Karen Spencer found themselves trapped inside their flooded home on Monday morning. They called 911, but as many Houstonians found last weekend, first responders were slammed with calls and unable to help everyone quickly. So J.C. called the next logical place: Chick-fil-A.

The Spencers usually call in their breakfast orders every morning, but the neighborhood restaurant was closed Monday because of Harvey.

Luckily, manager Jeffrey Urban was in, checking on things. Urban wasn’t planning on taking calls, but when he saw the Spencers’ number on caller ID, he answered, assuming they were calling to order breakfast.

When Urban learned of the Spencers’ situation, he called Cindy Smith, another manager at the restaurant, who sent her husband and several neighbors to rescue the Spencers.

“We ended up where Cindy, the other manager, was able to get her husband and four of her neighbors on a boat and a Jet Ski all the way over to where he lived,” Urban told HLN.

The couple then rode to safety, away from the rising waters inside their home.

Dr. Stephen Kimmel, a general pediatric surgeon at Clear Lake Regional Medical Center in Webster, Texas, was in the midst of dealing with flooding in his own home when he got the call. Sixteen-year-old Jacob Terrazas required immediate surgery.

Kimmel quickly realized he’d be unable to safely make the journey by car — the streets were flooded.

The hospital was able to get in touch with the volunteer fire department, who sent two firefighters with a truck and a canoe to help Kimmel.

Along the way, Kimmel canoed before he was given a ride in a firefighter’s pickup truck, then canoed again, and eventually walked the last mile in waist-high water.

The trip, which typically takes Kimmel 10 to 15 minutes, took him nearly an hour, but he had a job to do.

“Somebody had to take care of this young man,” Kimmel told CNN’s Erin Burnett, “and so I thought, well if I can do it, I certainly should.”

At the hospital, Terrazas said he didn’t even realize Kimmel was a doctor because of the way he was dressed.

“I thought he was just like some, I don’t know, just some dude,” Terrazas said, but he said he was thankful Kimmel was able to perform the surgery.

‘We heard your voice’

When their home in Dickinson, Texas, began to flood last Saturday night, the Joneses and their adult daughter Pam patiently waited for the Coast Guard to come rescue them.

But it was Austin Seth, a volunteer from Lake Jackson who brought his flat-bottom boat to Dickinson to aid in search and rescue efforts, who heard their calls for help. CNN’s Ed Lavandera and a crew were riding with Seth at the time.

Seth didn’t hesitate. He jumped in the water and started guiding Elmore Jones to the boat, where Lavandera helped pull the elderly man aboard. Producer Jason Morris and photojournalist Joel De La Rosa helped bring Elmore’s wife, JoAnn, and Pam Jones on the boat, along with the elder Joneses’ two dogs.

“We were about to leave the neighborhood, but we heard your voice,” Lavandera told Pam Jones.

Seth was able to reunite Pam with her husband and daughter, who took Elmore and JoAnn to their home in Friendswood, Texas.

‘Tell me when and where’

When Bay City, Texas, officials needed bus drivers to help evacuate the town, Linda Leissner, the athletic secretary for Bay City High School, knew exactly whom to ask. Leissner had been helping out in the city’s call center in the emergency operations center.

“We need bus drivers,” she said she texted to some of the high school’s athletic faculty. “I said that I knew I could count on coaches.”

The nearby Colorado River was expected to cover the city in as much as 10 feet of water.

Six members of the high school’s athletic department hit the road and got to work, helping to evacuate Bay City residents to Rosenberg, Texas. The coaches loaded the buses with residents, including some of their student athletes.

“It’s a natural instinct to say yes,” coach Nathan Janak said. “I drive a bus. I have a (commercial driver’s license). Tell me when and where.”

When they returned to Bay City, the town’s streets were beginning to flood. Only then did they make their own escapes.

Joshua Evola and his brother Jonathan were at home in Dallas on Sunday, watching the horrific images of flood-ravaged Houston on television.

“It just didn’t feel right laying on the couch and watching Houston suffer,” Joshua Evola told Erin Burnett. He called his brother and told him that they were going to Houston.

The brothers drove 200 miles over seven hours to Houston, where they took their boat out and rescued dozens of people from the floodwaters.

In videos that Joshua filmed, Jonathan is seen carrying a woman out of her flooded home on his back.

They witnessed a lot of suffering, but Joshua said he was encouraged by the response and the show of support that neighbors had shown for each other.

Another group that answered calls for help was the Cajun Navy, a grassroots group from Louisiana that began rescuing people in the aftermath of Hurricane Katrina in 2005.

The team of volunteers helps communities prepare for storms and works with them on rescues and food distribution.

The Cajun Navy performed numerous rescues throughout the week with a fleet of boats, trucks and trailers that the group brought to Houston last weekend.

One Texan saved by the group was 73-year-old Wilma Ellis, who was found floating face down in the water. According to Cajun Navy volunteer Joshua Lincoln, Ellis was not breathing when they pulled her onto their boat and had to be resuscitated. She is reportedly doing well and with family.

“In my life I’ve been through a lot of storms, including Katrina,” Lincoln told CNN’s John Berman. “Seeing how people in Texas responded and helped us in a disaster kind of tugged at my heart.”

When Harvey hit last Friday, four bakers at the El Bolillo Bakery in Houston found themselves trapped in the store. They couldn’t leave for two days.

But instead of sitting still, despairing over their situation and bad luck, they took advantage of it.

Luckily, the Mexican bakery was spared by the flood and had electricity the whole time, so they baked.

The team managed to take 4,000 pounds of flour and made nearly 5,000 pieces of bread, including Mexican bolillos and pan dulce, all for flood victims. Monday, they started giving the fruits of their labor to evacuees and victims of the flood in the Houston area.

Kirk Michaelis, the owner of the bakery, told CNN it was all about “reaching out and trying to help the community that has helped us for 21 years to grow where we’re at right now.”

“We’re just trying to be a blessing to other people that have been to us.”

Jim “Mattress Mack” McIngvale is well known in the Houston area for his wild commercials promoting his store, Gallery Furniture.

But when his neighbors’ homes started flooding, he and his team took Gallery Furniture’s delivery trucks and started rescuing people.

But Mattress Mack not only saved the people from the rising water — he also gave them a place to stay.

He opened the doors of Gallery Furniture’s showroom and started sheltering people inside. They slept on brand-new couches and watched local coverage of the floods in recliners.

“(The troops) are sleeping on the best Tempur-Pedic mattresses that are on the market,” store employee Dave Marchione said. “And I’ll tell you what — those are some happy soldiers.”

And then there was Otis.

A picture of the canine carrying a bag of his dog food along a wet street went viral after it was posted on Facebook, providing Texans and the rest of the country a brief moment of comic relief.

Owner Carter Miles, 5, left Otis in the care of his grandfather, Salvador Segovia, when he was evacuated. Segovia had no idea the dog was missing until his daughter called him and asked about the picture she’d seen online.

Otis eventually made it home safe to Segovia, but not before showing the world that sometimes when disaster strikes, you can be your own hero.