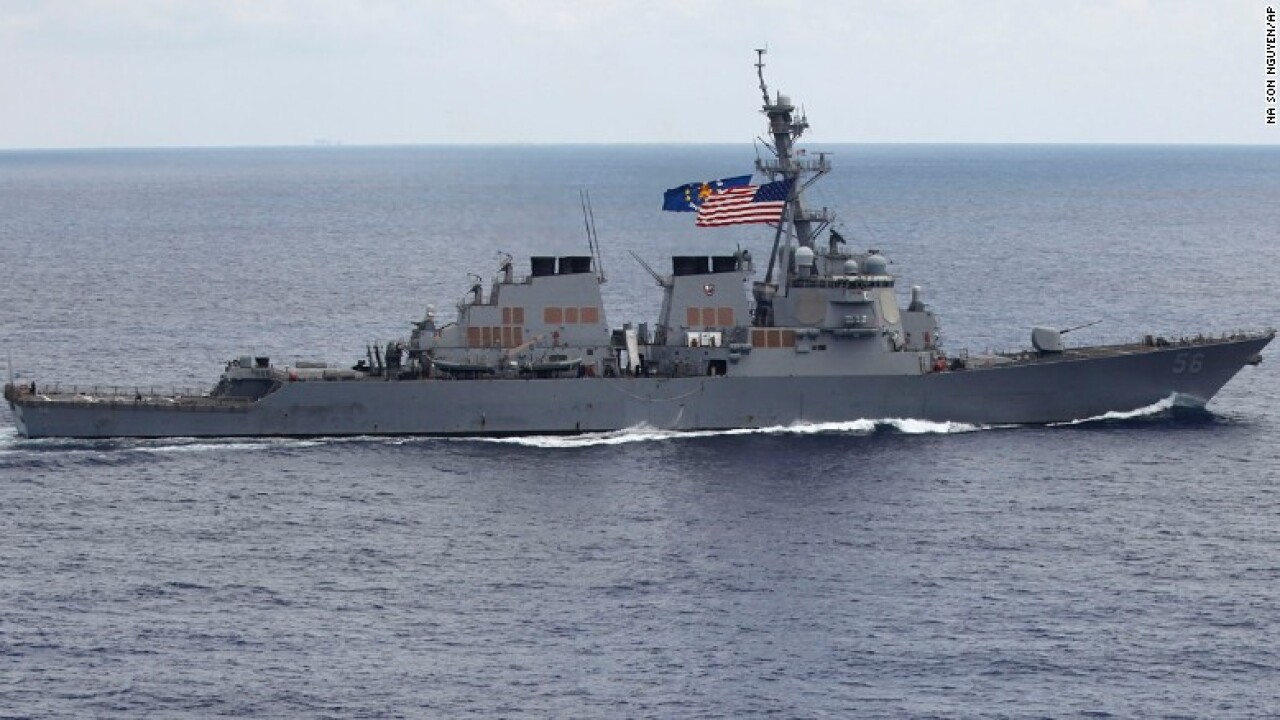 Ten US Navy sailors are missing after a US Navy guided-missile destroyer collided with a merchant ship east of Singapore early Monday, the Navy said in a statement.

The Navy’s 7th Fleet said the USS John S. McCain collided with the merchant vessel Alnic MC while the destroyer was making its way to a port visit in Singapore. The collision was reported at 5:24 am local time, according to the Navy statement.

A Navy official told CNN the McCain was fighting flooding in several places and that it had limited propulsion and electrical power. The Navy said the McCain was steaming under its own power to port.

In addition to the 10 missing sailors, the Navy said five were injured in the collision.

Search and rescue efforts are under way, the Navy statement said, with helicopters and Marine Corps Osprey aircraft from the amphibious assault ship USS America responding.

Singaporean ships and helicopters were also responding, the Navy said.

Initial reports indicate the US ship sustained damage to its aft port (rear left) side, the Navy statement said.

It did not give information on the status of the merchant vessel.

The McCain is 505 feet long and displaces about 9,000 tons. Its homeport is Yokosuka, Japan.

On June 17, the guided-missile destroyer USS Fitzgerald collided with a container ship off the coast of Japan. That collision resulted in the deaths of seven US sailors.

On May 9, the guided-missile cruiser USS Lake Champlain was struck by a small fishing boat off the Korean Peninsula.

And in late January, the guided-missile cruiser USS Antietam ran aground while trying to anchor in Tokyo Bay.

All four of the US warships are equipped with the Aegis missile defense system, which has been touted as a possible defense against any North Korean missile launch that might endanger US forces and US allies in Asia.

In a report on the Fitzgerald collision released just last week, the Navy it would review its training and qualification procedures.

“The collision was avoidable and both ships demonstrated poor seamanship. Within Fitzgerald, flawed watch stander teamwork and inadequate leadership contributed to the collision,” a 7th Fleet statement said.

The USS John S. McCain is named for the father and grandfather of US Sen. John McCain. Both of McCain’s relatives were US Navy admirals. The senator was a captain in the US Navy.

Earlier this month, the McCain carried out a freedom-of-navigation operation in the South China Sea, sailing within six nautical miles of Mischief Reef, one of the artificial islands built by China in the Spratlys.