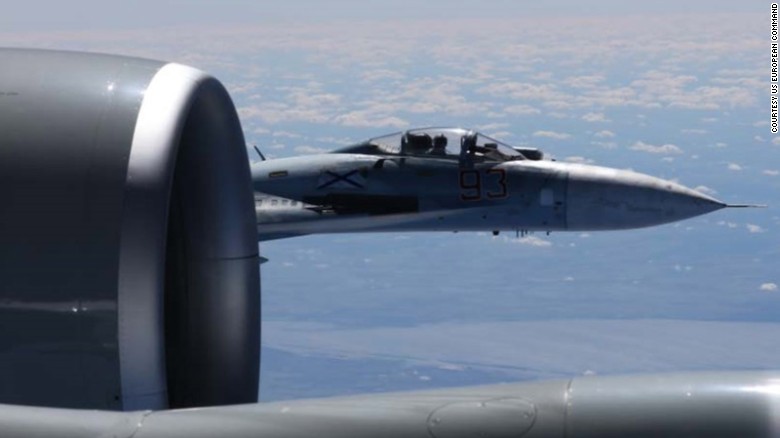 WASHINGTON — US European Command released dramatic photos that show the moment a Russian Su-27 fighter jet flew within five feet of a US Air Force RC-135 reconnaissance aircraft over the Baltic Sea — an encounter US officials assessed to be “unsafe.”

The intercept took place on Monday while the US aircraft was “flying in international airspace,” according to Meghan Henderson, a spokesperson for European Command.

The Russian plane was armed and flew “erratically,” a US official told CNN, noting that the maneuvers were deemed unsafe due in part to the proximity of the aircraft.

“Due to the high rate of closure speed and poor control of the (Russian) aircraft during the intercept, this interaction was determined to be unsafe,” she said.

The new photos, released on Thursday, show the Russian fighter jet flying so close to the wing of the US aircraft that the Russian pilot can be seen clearly in the cockpit.

The images also confirm that the Russian jet was armed.

Russia disputed claims that its aircraft was at fault during the encounter and said it intercepted two US reconnaissance aircraft as they “approached the Russian state border.”

“When being accompanied, the RC-135 plane made an attempt at approaching the Russian fighter jet making a provocative turn towards it,” the ministry said via TASS.

Then, 10 minutes later, a second US RC-135 entered the zone and was also intercepted by the Russian Su-27 jet, the ministry said.

There have been more than 30 interactions between Russian and US aircraft and ships near the Baltic Sea since the beginning of June, a US official told CNN. The vast majority of these encounters have been safe and professional, the official added — a point that adds to the significance of Monday’s incident.

“The vast majority of interactions we have, intercepts that occur when we fly and that are intercepted by the Russians are safe. This is an exception, not the norm, but we were again operating in international airspace and did nothing to provoke,” said Pentagon spokesperson Capt. Jeff Davis.