“I love the fresh air and being outdoors,” said DeCair. “I love seeing the flowers. And I’ve discovered that I really love the people I meet along the way.”

The retired teacher tackles three miles a day at a park in Midlothian, but in 2004, DeCair started a stroll for the ages. Step by step. State by State.

“Once you lose the curiosity there is not much left,” she said.

From Connecticut and Colorado to Nevada and New Hampshire and every state in between. DeCair communed with nature and her fellow Americans. DeCair stayed with like-minded and kind-hearted strangers who opened up their homes.

“This happened all of the time. People were so solicitous of my safety and took good care of me,” she added.

This was no sightseeing trip.

“There were the first few days that I was stiff and sore and I thought why was this fun,” said DeCair.

But not everyone was overjoyed to see her.

“There were a few dogs in Kansas who thought I would make a good lunch,” he said. 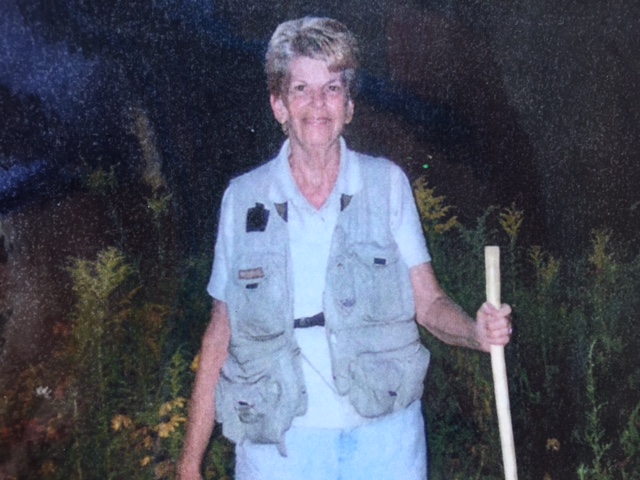 There were stumbles along the way.

“But 80 miles into my 100 in Montana I heard something snap. My body did not move the way it wanted. As it turned out I had three compression fractures and I was in a lot of pain,” she said.

But DeCair was not going to be denied.

“I wore a pedometer everywhere I went absolutely everywhere.”

“Oh. No. I don’t answer that question. I tell people that Virginia is my favorite state. Absolutely,” she said.

After 11 years she finally reached the finish line in 2015. A bitter sweet moment indeed.

“My last state was Idaho,” said DeCair. “I likened it to post-partum depression. It is like post-adventure depression.”

DeCair wanted to prove you can achieve lofty and lengthy goals no matter your age.

“It is like losing weight, stopping smoking or whatever, until you’re ready to do something about it, it is not going to happen on its own,” said DeCair.

Her advice is slow and steady truly does win the race of life.

“A little bit here and a little bit there. Moving forward. That is the key. Not trying to get it all at once,” said DeCair. “If you don’t use it you lose it. And that is really true.”

Mary DeCair is proving that taking small steps can lead to one giant feat.

“I do I feel great. If anybody knows me or meets me they’re going to hear, ‘Guess what I did?’. I can’t help myself!”

Now that DeCair has wrapped up her five thousand mile journey – she is turning her trek into a book. When DeCair isn’t walking she likes to do laps in the pool at the YMCA to stay fit.

If you know of someone with an interesting story reach out to me at gmcquade@WTVR.com.