Special education teacher Christian Colonel dances with one of his students at prom.

The excitement in the images is palpable. There are beautiful gowns, tuxedos and camera flashes. And at the center of it all, 13 special education students kicking off their prom night.

The kids can thank their generous community for the glamorous evening — and their special education teacher, Christian Colonel.

At Pocatello High School in southeastern Idaho, Colonel strives to make his students feel included. He pulled out all the stops for this one, special night.

A limousine pulled up. The group piled in and, as you would expect, started blasting music.

“We turned up Justin Bieber — the girls love just love him,” said Colonel. 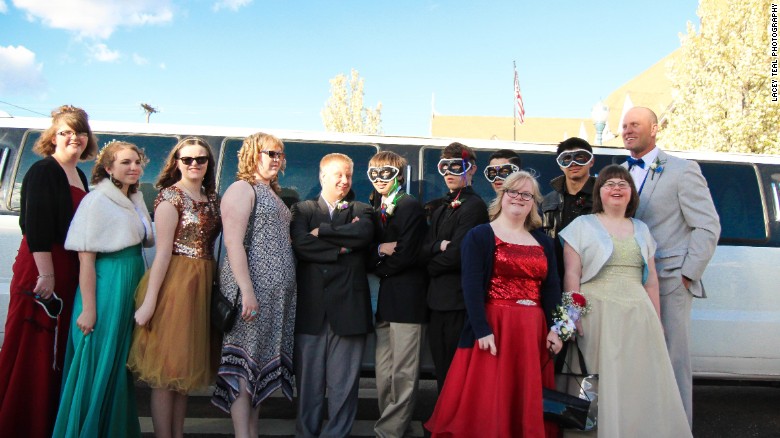 Then it was off to dinner at a local hibachi grill.

“The chef knew ahead of time (that a group of special needs kids were coming) and was super-engaged and perfect,” the teacher said.

In fact, it wasn’t just the restaurant that helped Colonel set up the perfect evening. A local photographer donated her services to capture all the magic. A florist donated corsages and boutonnieres. Even the limo blasting out Bieber was provided by a local company for free. “It all came together perfectly,” Colonel said.

After dinner, the group made their way to the high school. It was time to dance.

“I danced with a few of them,” remarked Colonel. But the real highlight for the students was the same as it was for anyone who has ever been to prom — dancing with someone you really like.

“A few of them have crushes on each other and got to dance together.”

“It was a pretty special evening”

In fact, the night was such a success that Colonel looks forward to keeping the tradition going next year.

“I would love to do it every year. People keep saying, ‘You made their dreams come true.'”

“In reality, they made my dreams come true.”