RICHMOND, Va. – For two full generations, the contributing artists behind Richmond's famous Grateful Dead Rock have slipped by undetected to paint their masterpiece on Belle Isle.

That is until Alexandra Costello, her kid sister, and best friend went down by the riverside on April 8. Costello said she and her bestie, Andrea Milian, have been going to the rock since they were kids.

"We went down there and noticed it was all grey . . . that's disgraceful, you can't have it like that. I just posted a status on Facebook, I was like, 'hey who's in charge of painting it?’"

Known as "Dead Rock" to the faithful, it is one of Richmond's oldest example of guerrilla (not-quite legal) art, and likely its best-known example.

The "steal your face"-inspired logo is one of the signature symbols of that legendary hippie jam band, the Grateful Dead. 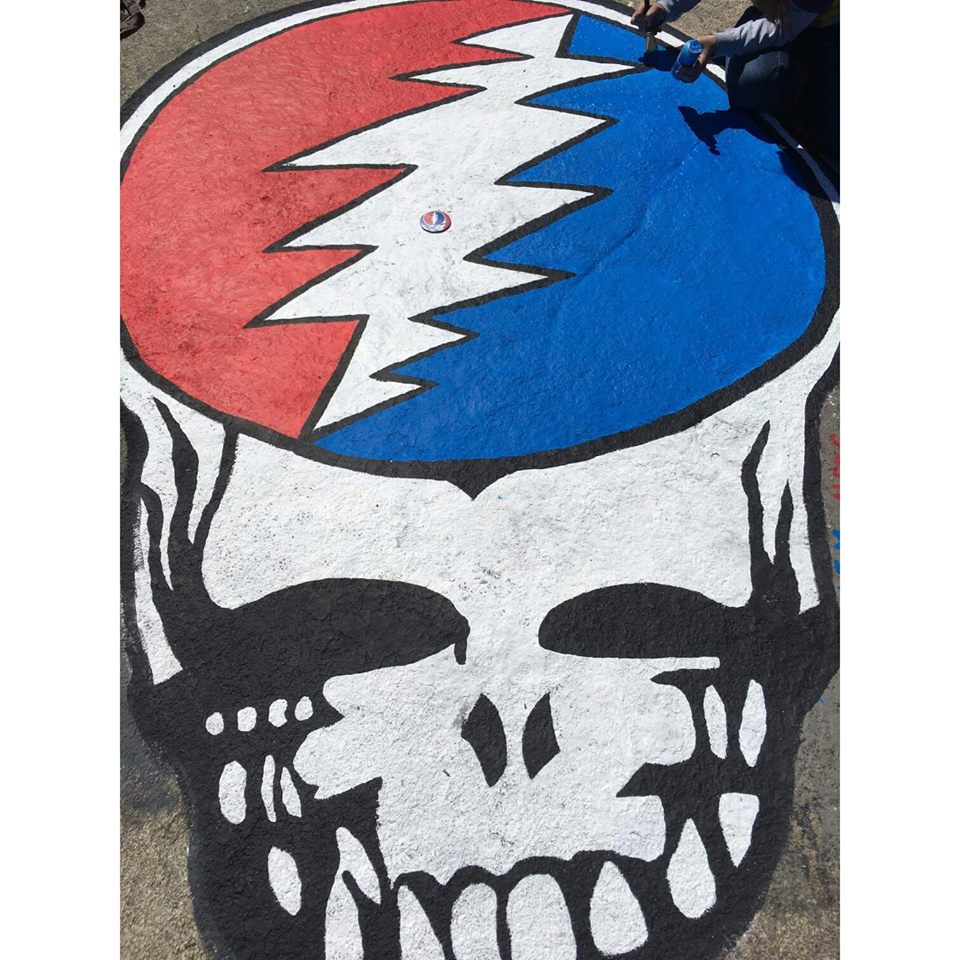 An unbroken chain of people has modified it, touched it up or completely repainted it during that time, making it a rare example of living art that has rippled through four decades.

The sisters and friend spent a full day completely repainting the rock, with aspiring artist Carolyn Costello sketching the outline from a 'stealie' button her dad had given her.

They said they had no idea they were doing anything wrong until the law arrived to critique their effort.

City code has it that folks can get arrested for painting on river rocks. But this one was there before it was part of James River Park, so it's grandfathered. At least that’s how the mighty grandfather of the James River Park, Ralph White, explained it last year during a RVA Revealed report about the iconic rock of ages.

White said the painting was there when he was hired in 1980, and he was told there was a family of Oregon Hill brothers, the Nuchols, who were big fans and attended an after-concert party on the island.

"The youngest brother," White said, "loved the Grateful Dead. And after seeing the show, he died of leukemia. And the older brothers said, you know, we're just poor guys out of Oregon Hill, we'll do a painting as a memorial. So they went out to Belle Isle and painted on the rock where everybody had hung out."

White admits the story could've been spun to play on his sympathies.

But it worked. His heart was touched.

There were times it got too big - at one point you could see it flying over the city - and too different from the original.

But overall, the keepers of Dead Rock have kept it real.

The many phases of Dead Rock. Three women were warned to paint over their version of Dead Rock, or face arrest

And the keepers have kept it low key, until this trio of young women whose daylight painting – their design closer to the original by Owsley Stanley -- caught the eye of a Richmond Police officer on a Saturday afternoon, April 8.

According to a police spokesperson, the officer and a park official told the women they would not be charged with vandalism if they removed the bright paint or painted over it -- with say -- a touch of grey.

Police said that the three women were warned again that the paint was still there -- but after 10 days passed, the city painted Dead Rock battleship grey. And the women were charged.

They fought the law – and for now, the law has won.

We reached out to Nathan Burrell, the highly regarded park manager mentored and hand-picked by White, but did not hear back from him on Friday.

Faced with mysteries dark and vast, it's also unclear who had decided to paint over the design by the time the sisters first found it.

One of the unspoken rules of the unofficial monument was not to add words or tags, and the young women added an "RVA" and their names. The rock artists did not know this. And if that was the offense, why not just paint over those parts?

Their rendition was also a little larger than the previous one but along the lines of some of the earlier renditions. (See our video.)

"I'm still to this day proud that I did it," Alex Costello said. She added that their father supports their decision. "There's no way it's going to be honored and people are going to protect it if no one bites the bullet and gets in trouble for it . . . "

According to police, the three charged with vandalism and/or destruction of private property are Alexandria Costello, 21; Carolyn Costello, 19; and Andrea Milian, 21.

The online comments in a petition to keep Dead Rock shows that Belle Isle would feel like a stranger without it.

“I'm signing it because dead rock is an important part to Richmond residents’ lives,” writes one Chester resident. “Please don't take our monument.”

“This was already tradition, and so many people have kept it up over the years,” another points out.

“I'm signing because I've been visiting Dead Rock since the mid-80's, and just assumed that it was a protected local landmark,” writes a fan. “I'd like to see it stay, and "not fade away.”

It's quite likely, given Dead Rock's history, that other renditions will just keep truckin' on for another generation or two.