The images that moved President Trump to act

The images were shocking. Children who suffocated in their final moments. Little ones who died horrible deaths in a war zone in Syria.

The images moved people around the world to call for action. In Washington, they moved a President to make a tough decision — to strike the alleged perpetrators — a senior administration official told CNN.

“No child of God should ever suffer such horror,” President Donald Trump said Thursday night after ordering the US military to strike an airfield in Syria with more than 50 cruise missiles.

Twenty-six children were among the more than 80 people killed in Tuesday’s attack.

We don’t know what type of nerve agent was used in the alleged chemical attack Tuesday in Idlib.

If the attack involved sarin, which was used in a 2013 attack in the Syrian capital of Damascus, its victims may not have died quickly. Nerve agents can take several minutes to kill. People choke as the muscles that control breathing spasm and shut down. Bodily functions can’t be controlled.

As images from the attack show, words fall short of the horror.

A doctor at the scene became emotional talking about the suffering he had witnessed, of the dead and the living. Fares al-Jundi told CNN entire families died together, their mouths covered in foam. The wounded blanketed the floors of the hospital where Jundi was.

“I’ve never seen anything like it, beyond description,” he said.

And that is why such harrowing photographs, painfully close and unsparing in their depictions of death, are necessary to understand what exactly is going on here. 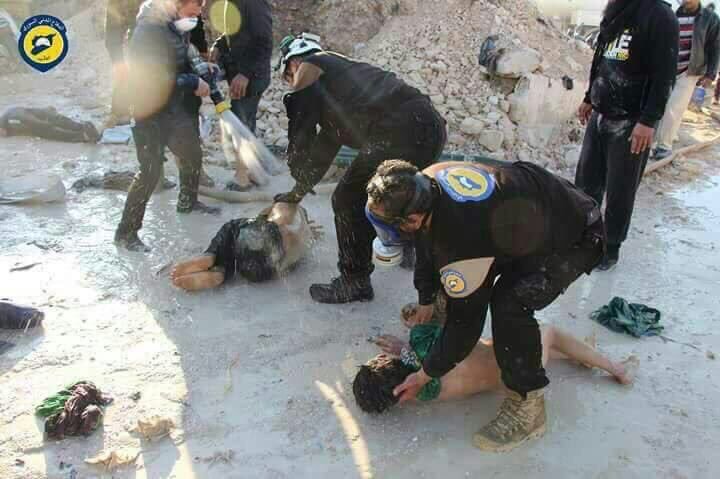 A voice of the war shares the unspeakable

Bana Alabed, a Syrian girl who gained worldwide notoriety for tweeting during the Syrian regime’s siege on Aleppo, shared more graphic photos of the aftermath of the chemical attack.

Alabed and her family were evacuated from Aleppo in December 2016, but the girl has continued to serve as a window into the suffering of her people.

In another photograph shown in the gallery above, half a dozen boys appear to be loaded into the back of a truck, tangled up in each other. They have been stripped of their clothes, their limbs contorted and skin splotched red. Some of them have their eyes closed. Those that do not look straight up with wide, empty eyes.

“This is today in Syriad in #Idlib,” Alabed says.

It does not go unnoticed that the 7-year-old Alabed is sharing images that no parent would ever want their child to see.

But the thousands of children who are endangered and dying in Syria do not get to hide behind a black bar. You can look away from a photograph, but for them it is their lives — and deaths — that are depicted.

Using a deadly nerve agent, Assad choked out the lives of helpless men, women and children. It was a slow and brutal death for so many. Even beautiful babies were cruelly murdered in this very barbaric attack. No child of god should ever suffer such horror.

Tonight I ordered a targeted military strike on the airfield in Syria from where the chemical attack was launched. It is in this vital national security of the United States to prevent and deter the spread and use of deadly chemical weapons.

There can be no dispute that Syria used banned chemical weapons, violated its obligations under the Chemical Weapons Convention and ignored the urging of the UN Security Council. Years of previous attempts at changing Assad’s behavior have all failed and failed very dramatically.

Tonight, I call on all civilized nations to join us in seeking to end the slaughter and bloodshed in Syria and also to end terrorism of all kinds and all types.

We ask for god’s wisdom as we face the challenge of our very troubled world. We pray for the lives of the wounded and for the souls of those who have passed. And we hope that as long as America stands for justice, that peace and harmony will in the end prevail.

Goodnight and god bless America and the entire world. Thank you.”