RICHMOND, Va. – Richmond is continuing its efforts to become a bicycle-friendly city by adding 25 additional miles of bicycle infrastructure, and the public is asked to provide input on the proposed infrastructure, on March 21.

So far 25 miles of bicycle infrastructure have been completed under the Bicycle Master Plan, which includes buffered bike lanes and sharrows.

The next phase will develop nine bike corridors throughout the city — in Northside, the near West End, Byrd Park/Randolph, East End, Forest Hills and South Richmond.

Construction will begin in the summer of 2017, at an approximate cost of $1 million. The funding for the bike infrastructure comes through city and state matching funds.

For a look at what bike infrastructure has been established and what is proposed, the map below was created recently by Jakob Helmboldt, the city’s first bicycle, pedestrian, and trails coordinator who was hired in August 2011.

A look at completed and proposed activity in Richmond. Click to enlarge view.

The green lines show infrastructure completed since 2010. The yellow lines show what existed prior to recent efforts to make the city more bikeable.

The orange and purple lines are a combination of planned and funded routes *** [Also, see here for street level renderings from a previous meeting].

The blue lines indicate proposed corridors currently in the design phase, which will be discussed at the March 21 meeting. Those corridors are below:

You can see how much of the city has already become more bikeable and how more of the city will be accessible once the planned construction is completed. The red lines are proposed roadways that will be funded by VDOT’s Highway Safety Improvement Program (HSIP) which provides, among other things, funding for bike and pedestrian safety enhancements.

Each corridor can be seen by clicking through the gallery below: 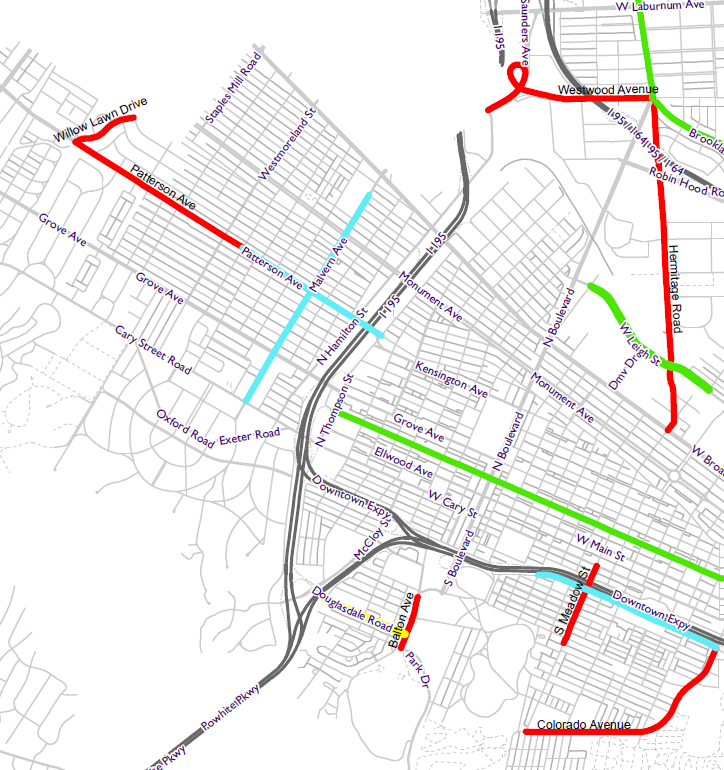 “We received funding for “road diets” or roadway conversions where streets with excess capacity could be restriped to add bike lanes,” said Helmboldt. “Council recently approved acceptance of those funds, and the map shows a number of potential corridors across the City that we are looking at for possible projects.”

Those lanes (in red) are not final, and may not wind up being those exact streets, Helmboldt added. There will be a feedback process to determine the best candidates for that funding.

There are other pieces of the transportation puzzle that will snap together to create “Complete Streets,” projects on the horizon that will facilitate car-free travel.

A look at the “B” which is the city’s proposed bike share program.

The proposed bike share program, the GRTC Pulse Rapid Bus Transit (Pulse) and the Richmond Transit Network Plan (RTNP) will make car-free travel easier. The RTNP will build upon the Pulse’s backbone and transform existing bus lines. The briefest way to describe this is that there will be main corridors connecting crosstown destinations, by bus (and somewhat now by bike) and the bike share program will facilitate neighborhood travel. You can read more about the complete picture here.

“The Big Bike Lanes Meeting (as we call it) is an important opportunity for Richmond residents and businesses to engage in the City’s implementation of the Bicycle Master Plan,” Hepp-Buchanan said. “We are excited about the efforts to build these projects, which will contribute to Richmond’s pursuit of a healthy, equitable transportation system for everyone.”

The Tuesday meeting will be held from 5 to 7 p.m. at the Main Library on 101 E. Franklin Street.

Other potential projects open to public discussion include buffered bike lanes on 1st and 2nd Streets and a proposed bike-walk street on 29th Street in Church Hill. The community meeting for those projects is at 6 p.m. on March 20, at the Hippodrome Theater on528 North 2nd Street.

***The purple line represents funded projects from three Transportation Alternatives Program (TAP) awards from VDOT via the Federal TAP grants but work has not begun.

***The one orange line or the planned route is part of a major redesign of the interstate interchange there. It would also reconfigure some of the nearby intersections. That is just getting underway, but due to the magnitude, it will be a multi-year project, with the bike lanes being merely one element of a much bigger project.