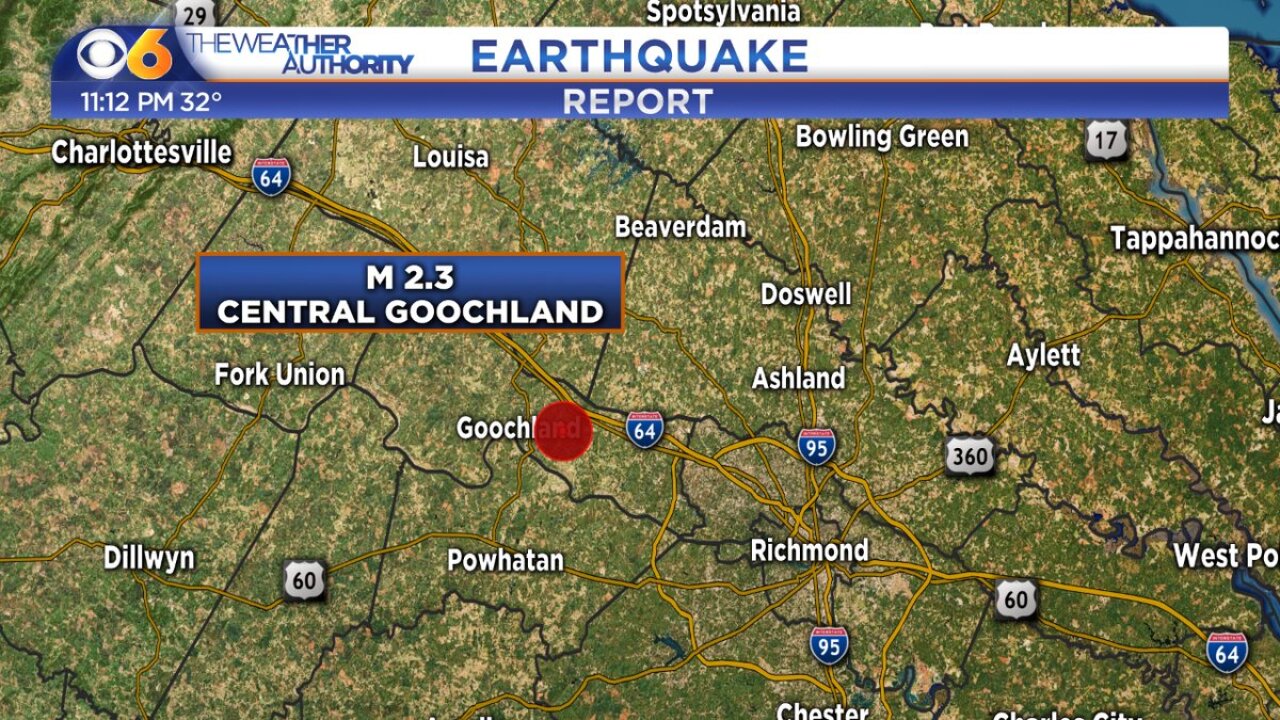 The United States Geological Survey reported the magnitude-2.3 earthquake struck at about 10:11 p.m. (The quake was first reported as 2.1-magnitude, but was later revised as is often the case.)

It was centered about three miles northeast of Goochland Courthouse and not far from Oilville.

Earthquakes with magnitudes less than 2.5 are often not felt, but will be picked up by seismograph.

People from Hanover and Powhatan counties, as well as folks in Short Pump and other nearby locations, reported feeling the quake.

"No reports of injuries or damages resulting from the earthquake have been reported as of 8:30 a.m. on Monday," Goochland Administrative Services Manager Paul Drumwright said. "Goochland County and VDEM request citizens check over their homes and property for any visual or hidden damages. Attention should be paid to foundations, chimneys, and sheetrock of homes and businesses.

Lonny Blackburn said he felt the tremor in Powhatan County along Huguenot Trail.

"[It] sounded like a sonic boom or big explosion and lasted maybe five seconds, shaking the house," he wrote.

Pam Cassidy in Powhatan also heard and felt the tremor.

"I heard a loud rumble like thunder with very slight shake of the house like in a thunderstorm," Cassidy wrote. "My mom was sitting on a kitchen chair and she said she felt a quick shaking and thought it was a distant explosion."

Ray Weinstein in western Hanover County about two miles from Oilville said he at first thought a semi was rumbling down the road.

"The house shook for just a second or two," he wrote.

Larry Gordon, who also lives in western Hanover near near Oilville said it only lasted a few seconds.

"Sounded like thunder but with a little shaking," he posted.

Josephine Alicia Martinez said she and her husband felt and heard the quake in Henrico County's West End.

"We were really surprised!" she posted.

Other folks reported they did not feel the quake, but did hear something.

"Didn't feel anything, but heard a loud boom. Like thunder," Debbie DeMarco from Richmond wrote.

Did you feel Sunday's earthquake? Tell us about it here.