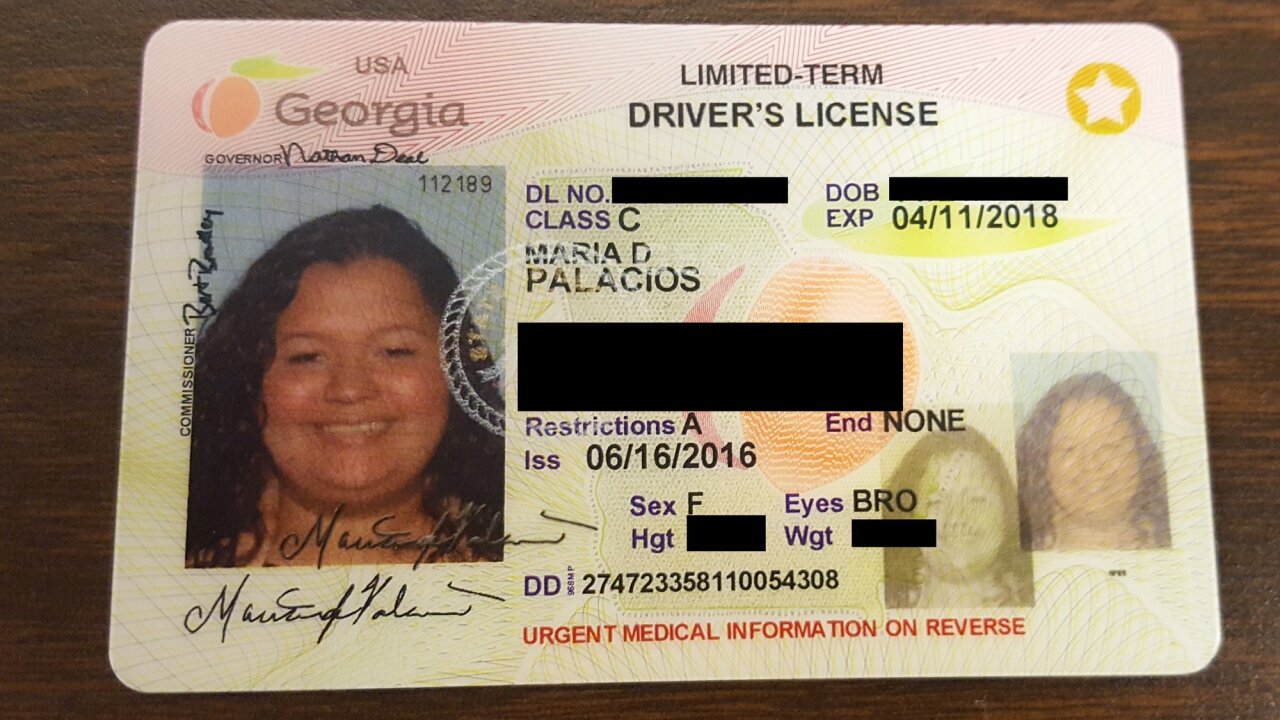 Legal resident Maria Palacios has a license that says “limited-term” for when her green card expires. If Georgia passes HB 324, residents like Palacios would also have “ineligible voter” on their licenses. Georgia would likely be the first state with ‘ineligible voter’ on licenses.

ATLANTA — Maria Palacios is a proud green card holder who’s lived in Georgia since she was a child. But now she fears a state bill could lead to backlash for noncitizens like herself with the addition of two words to her driver’s license: “ineligible voter.”

Supporters of Georgia’s House Bill 324 say the measure is another way to help prevent voter fraud, but critics decry it as unnecessary and a tool for discrimination.

“When I pick up my children from day care, I have to show them my ID,” said Palacios, 27. If this bill becomes law, “they might assume that I’m an undocumented immigrant and treat me differently.”

If passed, Georgia likely would become the first state to put “ineligible voter” on certain driver’s licenses, according to the National Conference of State Legislatures.

The proposal comes as President Donald Trump has vowed to crack down on undocumented immigrants, issuing executive orders that pave the way for a vast expansion of authority for immigration officers and a dramatic increase in deportations.

“Under the current driver’s license system, if you’re not a citizen, then it has the term ‘term-limited,'” Powell said.

“One of the things that has bothered me for quite a while is … what does ‘limited-term’ mean to the average citizen that sees a driver’s license?”

“Limited-term” is a phrase stamped on the licenses of those who have “temporary lawful status in the United States,” according to US Citizenship and Immigration Services.

And in Georgia, you can’t get a driver’s license if you don’t have “lawful status in the United States,” the Georgia Department of Driver Services says. Twelve states and the District of Columbia allow undocumented immigrants to get driver’s licenses, according to the conference of legislatures.

So what’s this debate really about? Depends on who you ask.

Legal resident Maria Palacios has a license that says “limited-term” for when her green card expires. If Georgia passes HB 324, residents like Palacios would also have “ineligible voter” on their licenses. Georgia would likely be the first state with ‘ineligible voter’ on licenses.

Powell said the point of the bill is “just clearly a way of stating the fact that someone is not eligible to vote, or that driver’s license can’t be used for some other purpose other than for driving privileges.”

But Rep. Gloria Frazier, a Democrat who is also a member of the House Public Safety and Homeland Security Committee, said there are already safeguards to prevent noncitizens from voting.

“If they go to register to vote, (and) their name is not on the list, they already have a mechanism in place to check whether you are an eligible voter,” she said.

But the concerns extend beyond just voting.

Republican Rep. J. Collins said there are business reasons for clearly seeing whether someone is a US citizen on his or her driver’s license.

“If you own a business in this state, and you’re going to take a check from someone … nine times out of 10 you ask for a driver’s license,” said Collins, a member of the Public Safety and Homeland Security Committee.

Palacios said that notion doesn’t make sense — especially because you have to be documented to get a license in Georgia.

“Well that is huge fraud, right? For people who don’t have the proper funds or who can’t honor a check?” she said. “So I don’t think the issue’s there. I don’t think a DACA recipient or a legal permanent resident would risk their lawful status by writing a bad check.”

DACA, or Deferred Action for Childhood Arrivals, allows some undocumented immigrants who came to the US as children to get driver’s licenses and legally secure jobs.

Jensohai Reyes is a DACA recipient. He said he worries that if his license describes him as a noncitizen, he might get treated differently by an officer if he gets pulled over.

“Not every cop is like that,” Reyes said, but “if a cop stops me, and he asks for my license, and he sees ‘noncitizen,’ depending on how he feels politically is how he’ll treat me.”

Powell’s original version of HB 324 proposed stamping the word “noncitizen” on certain licenses, including those of legal permanent residents.

“That seemed to have stirred a lot of ire,” he said.

Soon, Powell’s phone was flooded with calls — including one from a green card holder with a story that surprised him.

The young man “assured me that as a noncitizen, that he didn’t have a problem with the concept of what I was talking about doing,” Powell said.

“The reason he thought we needed to put this in was because when he got his driver’s license, he said he almost had to get into a fight to keep from being registered to vote, even though he informed them numerous times that he wasn’t voter-eligible.”

But the caller did request one change:

“His suggestion to me was instead of using the term, ‘noncitizen,’ to use the term ‘noneligible voter’ or ‘ineligible voter’ — that that would seem … more acceptable to a lot of folks.”

So Powell changed “noncitizen” to “ineligible voter.” He said he thought the new phrase would be viewed as a “kinder and gentler” alternative.

But wouldn’t that switch also affect thousands of felons who have lost their voting rights?

Not exactly. According to the Georgia State Board of Pardons and Paroles, felons automatically get their voting rights back after completing their sentences.

HB 324 passed the House Public Safety and Homeland Security Committee this week by a split vote. The next step is the Rules Committee, which would decide whether the bill gets to the full House.

But time’s running out.

Friday is known as “crossover day,” the deadline for Georgia bills to pass either the House or Senate in order to survive and make it to the other chamber. As of Thursday afternoon, HB 324’s sponsor had not asked for the bill to be considered Friday, Rules Committee attorney Keith Williams said.

Powell did not return CNN’s request for comment Thursday on whether he intends to make that request Friday.