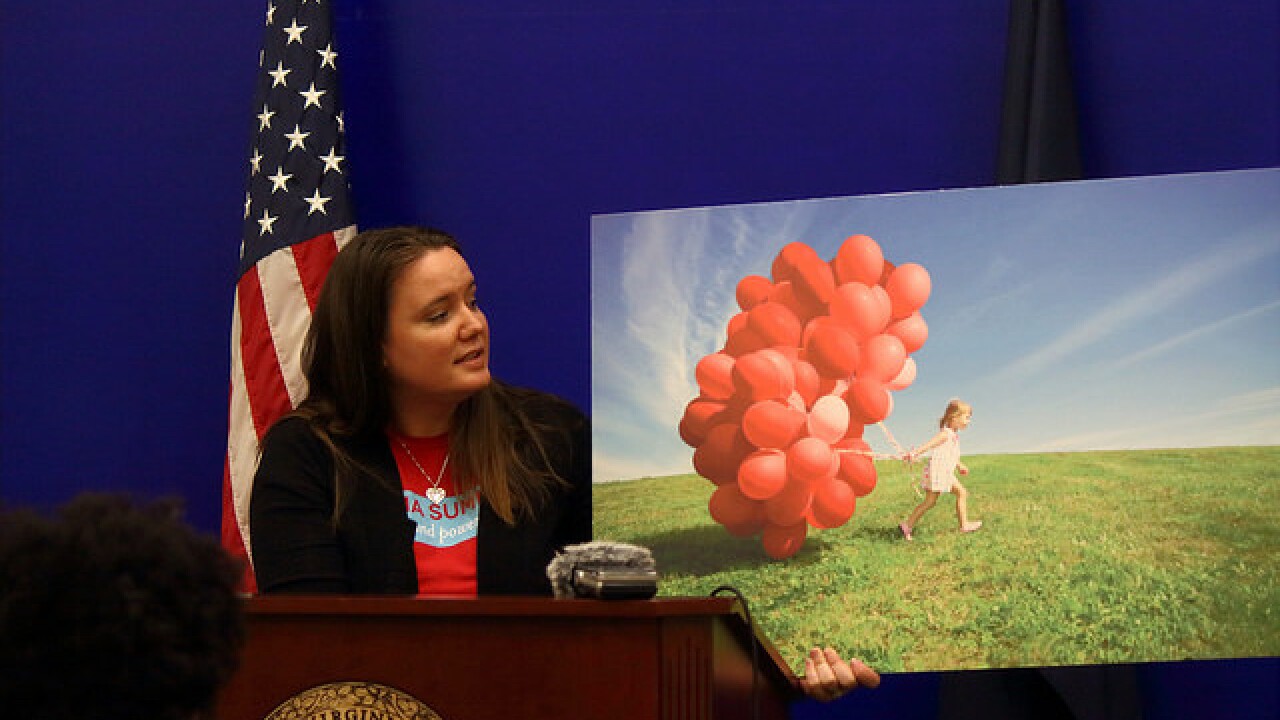 RICHMOND, Va. – The Virginia chapter of Moms Clean Air Force, a national coalition of parents concerned about air pollution and global warming, called on state and federal officials Monday to be conscientious when making public policy decisions with an environmental impact.

The group called for stricter environmental regulations at a news conference at Capitol Square, where children and parents donned red T-shirts that read, “Tell Washington: Listen to your Mothers.” Alden Cleanthes, the Virginia field organizer who set up the event, said the group chose Presidents Day because most children were off from school.

Attention to environmental issues is especially important since President Donald Trump has called climate change a Chinese hoax, said Tiziana Bottino, a mother from Northern Virginia and a Moms Clean Air Force activist. “The concept of global warming was created by and for the Chinese in order to make U.S. manufacturing non-competitive,” Trump tweeted in 2012.

For many members of Moms Clean Air Force, the fight is personal. Mothers and fathers said they joined the organization to protect their children’s health.

Tuere Brown, a mother from Hampton Roads, said part of the reason she was standing with Moms Clean Air Force was because her third child developed asthma at age 3 after moving to Virginia. At the time, she said, her son had no history of asthma.

Brown, a teacher, said flooding in Norfolk is another problem that cannot be ignored.

“I had students with me. I had to carry them to higher ground because we were stuck in water,” Brown said. “I had to carry them on my back because it was so deep, and I was scared they might step on something because they were so small.”

Moms Clean Air Force does not lobby for specific legislation, but it does request action, Cleanthes said. It also partners with the League of Conservation Voters, which does take a position on legislation.

This legislative session, the league pushed for a bill introduced by Sen. Scott Surovell, D-Fairfax County, that would require Dominion Virginia Power to evaluate the potential pollution from its coal ash ponds near four generating plants.

The bill has passed both the House and Senate. The House amended the bill and weakened it, but it’s better than nothing, Belote said.

Members of Moms Clean Air Force said they hope the composition of their group will prevent lawmakers from passing bills that could harm the environment.

“How are you going to look at a mother and say, ‘I don’t care that your child can’t breathe. I’m going to pass this legislation anyway’?” Cleanthes said.

In another energy-related development Monday, Gov. Terry McAuliffe announced that Virginia was selected as the recipient of a $500,000 grant to support Property Assessed Clean Energy programs across the state.

“This grant supports the acceleration of low-cost financing for energy efficiency investments across the state. I look forward to working with our public and private sector partners to reduce energy consumption and lower electricity bills in the Commonwealth,” McAuliffe said.