RICHMOND, Va. -- Following President Donald Trump's executive order banning travel to the US from seven Muslim-majority countries late Friday, protests continued in many cities across the country, including Richmond.

A crowd of hundreds gathered on Virginia Commonwealth University's campus in Richmond Sunday afternoon in what organizers said started as a conversation on Twitter and led to an impromptu rally.

School officials estimated the size of the crowd at more than 500 people, but were unable to provide an exact number.

While a variety of people spoke at the rally, many were Muslim Americans living in Central Virginia.

Sanaz Ghodsi, a VCU student whose family emigrated to American from Iran, said she is proud of her Islamic faith.

"There is a lot of pain that my community is dealing with,” Ghodsi said. "We have constantly been blamed for something we had nothing to do with."

Henrico mother Nora Ramadan said her parents were welcomed when they came to the U.S. from the Middle East just generation ago. She recalled her parents’ decision to move to the US with tears in her eyes.

"The American my parents and grandparents migrated to is the true America. The America where the great Martin Luther King fought to end segregation,” Ramadan said. “Where Rosa Parks held firm to the belief that indeed we are all created equal."

While the president's travel ban only applies to seven predominately Muslim countries that are most identifiable with terrorism, some Muslim Americans living in Central Virginia said the executive order feels close to a blanket Muslim ban. 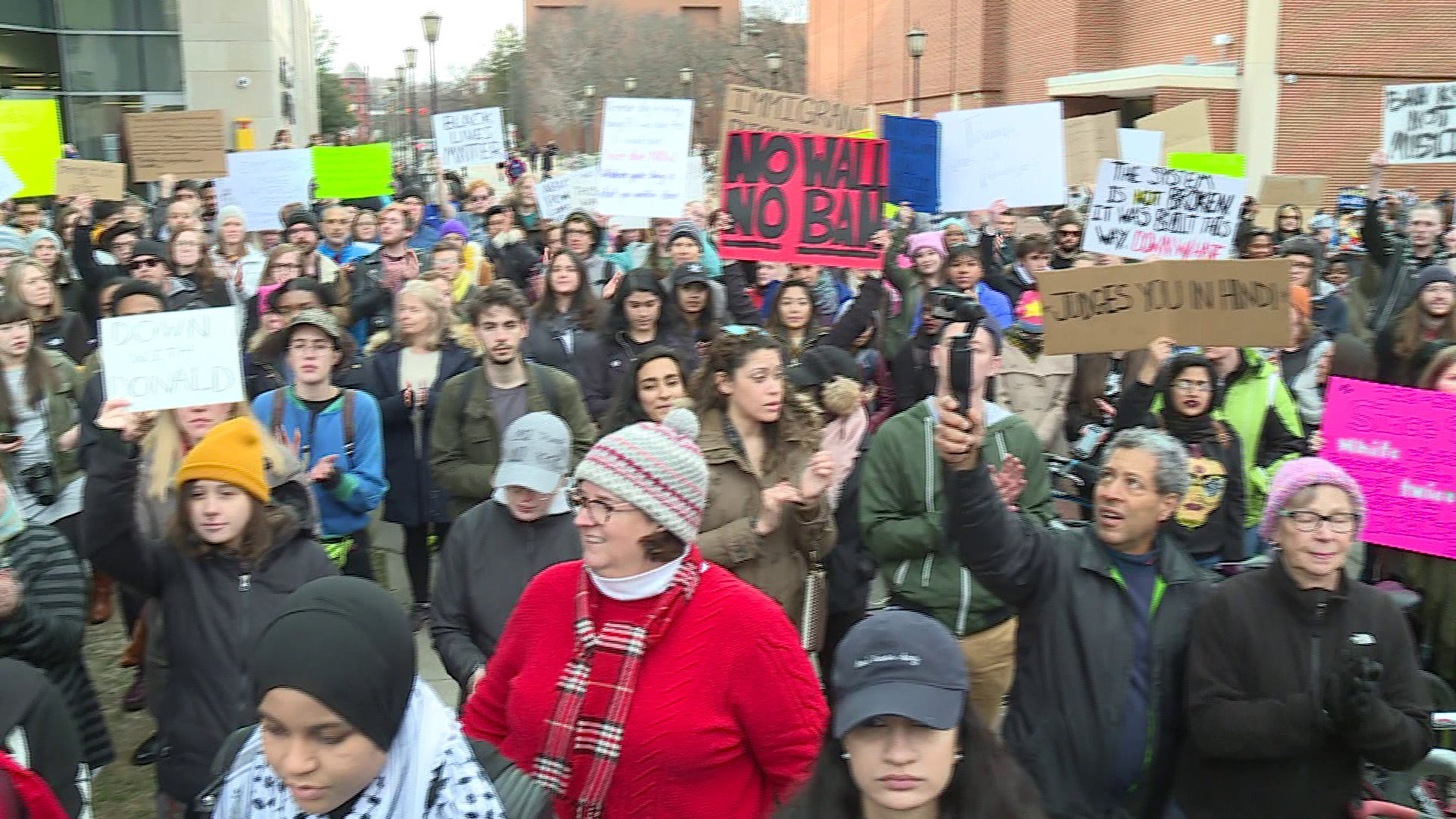 Virginia Governor Terry McAuliffe is demanding answers from the White House about the status of the ban, including how those who have been detained are being treated.

"This Executive Order is antithetical to the values upon which our nation was founded. It sends a message to the world that people who are fleeing religious persecution, simply traveling to work or meeting loved ones are not welcome in America," McAuliffe said. "It will certainly be used by a small minority of extremists as a recruitment and radicalization tool to grow their numbers and threaten the security of our sons and daughters, both abroad and here at home."

McAuliffe said that in the two days the ban has been in place little information has been shared with elected leaders or the public.

The governor questioned how the policy was being implemented and if steps were being taken to protect the rights of those he civil and those being detained and deported.

McAuliffe said his chief of staff has asked for answers to the following questions:

1. How many travelers who were bound for the United States remain detained at the Customs and Border Control facilities at Dulles International Airport?

2. Can you assure the Virginia public of the health and general welfare of the individuals who have been detained? And what, if any, arrangements are being made to accommodate people with special medical needs?

3. Can you state with certainty that all of these persons have access to counsel in accordance with U.S. District Court Judge Brinkema’s order of last night?

4. What is the immediate plan and approach toward any persons whose status remains uncertain?

Additionally, Attorney General Mark Herring has asked federal officials for information about any detentions in Virginia because of the executive order.

"I am extremely concerned about reports that U.S. Customs and Border Protection at Dulles continued to deny access to attorneys in direct defiance of a valid court order," Herring said. "If true, that would represent a frightening and unacceptable breakdown in the rule of law. While we wait for President Trump and his administration to come forward with the information the people of Virginia deserve and demand, we will continue to examine all options for the state to oppose this un-American and unlawful executive order."

However, GOP Congressman Dave Brat maintained the order protects Americans and pointed out that it only applies to seven of the 46 Muslim-majority nations in the world.

Trump: 'This is not a Muslim ban'

In statement Sunday afternoon, Trump wrote the country would continue showing “compassion to those fleeing oppression.”

“America has always been the land of the free and home of the brave,” he wrote. “We will keep it free and keep it safe, as the media knows, but refuses to say.”

He pushed back on criticism suggesting his executive order amounts to the “Muslim ban” he proposed as a candidate.

“To be clear, this is not a Muslim ban, as the media is falsely reporting,” he wrote. “This is not about religion — this is about terror and keeping our country safe.”

The statement is the latest attempt to explain the controversial order, which the President signed at the Pentagon on Friday. The move halted US refugee entry into the US for 120 days, and barred all citizens of seven predominantly Muslim nations from entering the US for three months.

Additionally, the order blocks all citizens of Iraq from entering the United States for 90 days. The other nations under the same restrictions are Iran, Libya, Somalia, Sudan, Syria and Yemen.

Trump, in his statement Sunday, wrote those countries “are the same countries previously identified by the Obama administration as sources of terror.”

But a federal judge in New York temporarily blocked part of Trump's order late on Saturday night, ruling that citizens of the seven countries who hold valid visas and have already arrived in the United States cannot be removed from the United States.