Puppy saved from abuse gets happily ever after home

TEMPE, Ariz. — It’s a happy ending for a sweet puppy who suffered unimaginable abuse at the hands of his former owner.

The 4-month-old Golden retriever, now named “Raine,” has been nursed back to health, and on Friday was adopted by the person who rescued him, KTVK reported.

An ASU student had been hearing what sounded like an animal in distress for months.

In early January, she was finally able to locate the apartment where the puppy was whimpering and crying.

Police say it turns out that the dog’s owner, 21-year-old Shundong Hu, 21, had been beating the puppy with a metal rod. 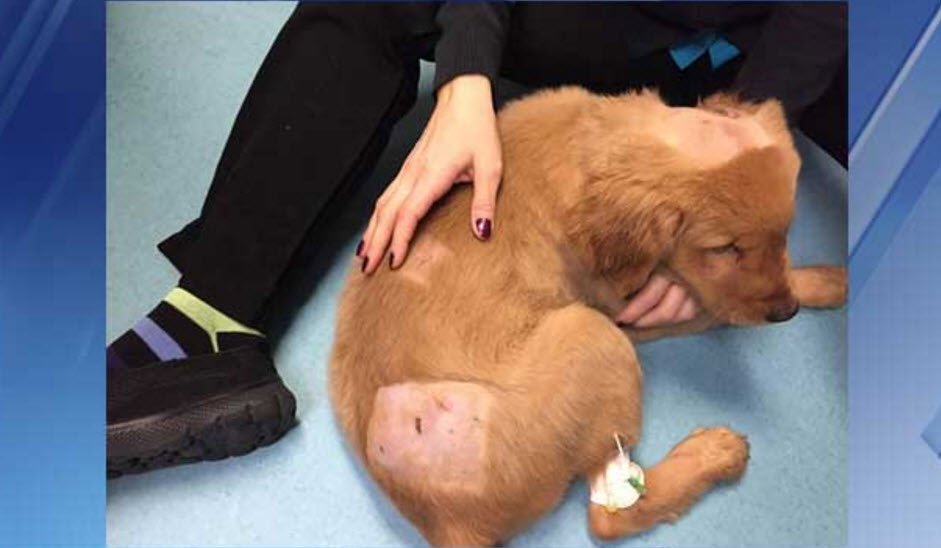 “Raine was unable to escape or defend itself from the metal rod or Hu,” the arresting officer wrote in a report.

Hu was arrested and booked into the Tempe Police Jail on felony animal cruelty charges. Hu is a Chinese national college student with no ties to the community, police said.

After searching Hu’s apartment, officers said they found two cats who also appeared to be abused. According to the Arizona Humane Society, one cat has trauma to its mouth, the other was beaten so badly it’s eye is detached from the socket.

Hu could face additional charges in connection to the cats’ injuries.

The puppy was taken into the loving care of the Arizona Humane Society.

“Despite all he has been through, this little pup is so resilient and spirited and chooses to spend his time playing and curled up in people’s laps,” AHS said in a statement.

AHS continued to care for Raine for several weeks. The shelter was flooded with emails and phone calls from people who heard Raine’s story and wanted to adopt him. More than 300 people had come forward offering their home and their love

In the end, the shelter decided not to have an adoption drawing. Staffers felt the person most deserving of taking Raine home was the woman who saved him.