Protesters in the United States and around the world joined marches Saturday to raise awareness of women’s rights and other civil rights they fear could be under threat under Donald Trump’s presidency.

The key focus of the day was the Women’s March on Washington, which organizers say may have attracted a quarter of a million participants.

But there were also hundreds of “sister marches” around the United States, with some of the biggest in Boston, New York, Chicago and Los Angeles.

And women and men in cities around the world — including Sydney, Berlin, London, Paris and Cape Town, South Africa — also marched in solidarity and in opposition to the values they think Trump represents.

A crowd of people gathered near the US Embassy in Mexico City on Saturday, shutting down the street and holding signs.

“Say it loud, say it clear, migrants are welcome here,” they shouted.

Not all of the protesters were Mexican. Some Americans were there, too, in a show of solidarity.

One man told CNN, “It’s a little strange to have this kind of shame and lack of pride for what direction the United States is heading in.”

“Love rules in Antarctica,” read one poster, held by a man bundled up on the snowy landscape in Paradise Bay.

“We are allies, not bystanders,” read another sign, held by a woman posing in front of a glacier. 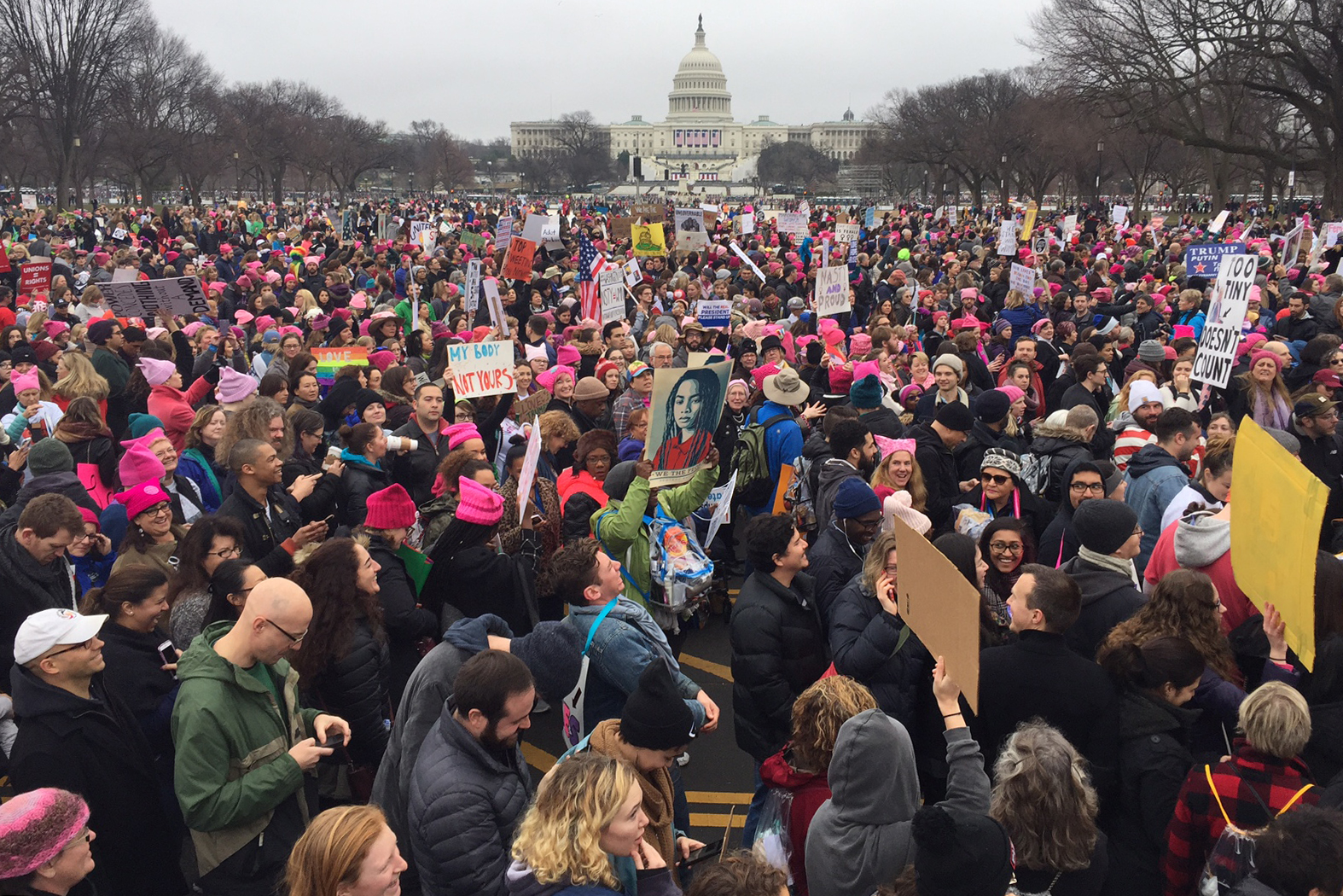 Australia was the scene of the first major international march, with thousands joining an anti-Trump demonstration in downtown Sydney.

Organizers said as many as 5,000 people attended the protest at Martin Place; police estimated the number was closer to 3,000.

Chants from the crowd included “Women united will never be defeated” and “When women’s rights are under attack, what do we do, stand up, fight back.” Some carried banners with messages such as “Girl Power vs. Trump Tower” and “Dump the Trump.”

A separate group of about 30 Trump supporters held a rally in Sydney. The police restrained some of them, blocking them from entering the same area as the Trump protest group.

Protest organizers in New Zealand’s capital, Wellington, said about 700 people turned out there for a women’s march. Marches were also held in Auckland, Christchurch and Dunedin.

Protesters also joined together to march in Nairobi, Kenya — the African nation that was the home country of former President Barack Obama’s father.

Marchers in Cape Town, South Africa, carried banners with slogans such as “Climate change is a women’s issue” and “So over mediocre men running things.”

Big crowds turned out Saturday in dozens of cities across Europe, with marchers including men, women and children.

Protesters who gathered outside one of Rome’s most famous structures, the Pantheon, on Saturday morning carried signs reading “Yes we must” and “Women’s rights are human rights.”

Demonstrators also took to the streets of Berlin, Frankfurt, Munich and other cities in Germany.

Katy Rea, who was at the march in Berlin, told CNN: “There are around 1,000 people. Lots of families, children. Very friendly atmosphere. Some police are present, but it’s tame and relaxed.”

Marches also took place in cities up and down the United Kingdom, from London to Cardiff, Liverpool, Manchester, Belfast and Edinburgh.

In London, large crowds joined a two-mile march starting outside the US Embassy and ending with a rally in the city’s historic Trafalgar Square.

Women’s rights weren’t the only issue on the agenda, with placards also bearing slogans to do with Brexit, nuclear weapons, workers’ rights and lesbian, gay, bisexual and transgender rights.

Speakers at Trafalgar Square told the crowds at least 100,000 people had turned out. London’s Metropolitan Police do not provide crowd estimates, but aerial footage showed large numbers of people gathered in the square.

London Mayor Sadiq Khan — who before the US presidential election told CNN that Trump’s views of Islam were “ignorant” — posted a tweet encouraging Londoners to join the march and “show how much we value the rights every woman should have.”

In Paris, demonstrators gathered near the iconic Eiffel Tower before marching through the streets waving flags and banners.

“A woman’s place is in the house — the White House,” read one pink poster at the Paris event.

Other French cities including Marseille, Toulouse and Bordeaux were also holding events.

Protesters in Barcelona, Spain, chanted “We will not be silent” and “My body, my choice” as they marched.

On Friday night, a crowd of predominantly female protesters gathered in Brussels, Belgium, to denounce sexism and protest against Trump.

The Women’s March on Washington, which began at 10 a.m. ET near Capitol Hill, came on the heels of a slew of protests there on Inauguration Day.

The march, which began with a modest Facebook call in the aftermath of the November election, has grown into what could be one of the larger political demonstrations ever seen in the US capital.

Many of those taking part said they are concerned about Trump’s agenda, his past remarks that appeared to demean women and allegations against him of sexual misconduct — which he has denied.

Thousands of people have also been busy making cat-eared knit hats to wear at the march, with the aim of creating a “sea of pink” on the National Mall.

Organizers of the so-called Pussyhat Project said they have received tens of thousands of handmade hats to distribute to marchers, with submissions flooding in from all 50 states and as far away as France and New Zealand.

Elizabeth England posted footage on Twitter showing scores of protesters, many in pink hats, gathered close to the Baltimore Penn Station on their way to the march. She told CNN: “Everyone is friendly and excited and hoping the trains start running more!”