Accumulating snow to start the weekend

RICHMOND, Va. --  There is snow forecasted for parts of Virginia over the next couple of days.

A winter storm watch has been issued for five counties in Southeastern Virginia: Gloucester, Surry, James City, Greenville and Sussex.  A watch is used when the risk of a hazardous weather has increased significantly, but its occurrence, location or timing is still uncertain. It is intended to provide enough lead time so those who need to set their plans in motion can do so.

Highs Thursday will be in the low to mid 40s.

A disturbance will swing through late Thursday afternoon into early Friday morning.  There will not be a lot of energy or moisture to work with so snowfall will be scattered and light.

Some spots could pick up a heavy coating, with the best chance of that north of I-64.  Far northern Virginia could see up to an inch in a few locations.  Highs Friday will be in the upper 30s and lower 40s.

A larger storm will arrive Friday evening into Saturday.

The track of this storm will go to our southeast, but it should be close enough to produce accumulating snow.  Temperatures during most of this period should be at or below freezing, so it will fall primarily as all snow.  The initial hour or two may be rain or a mix. 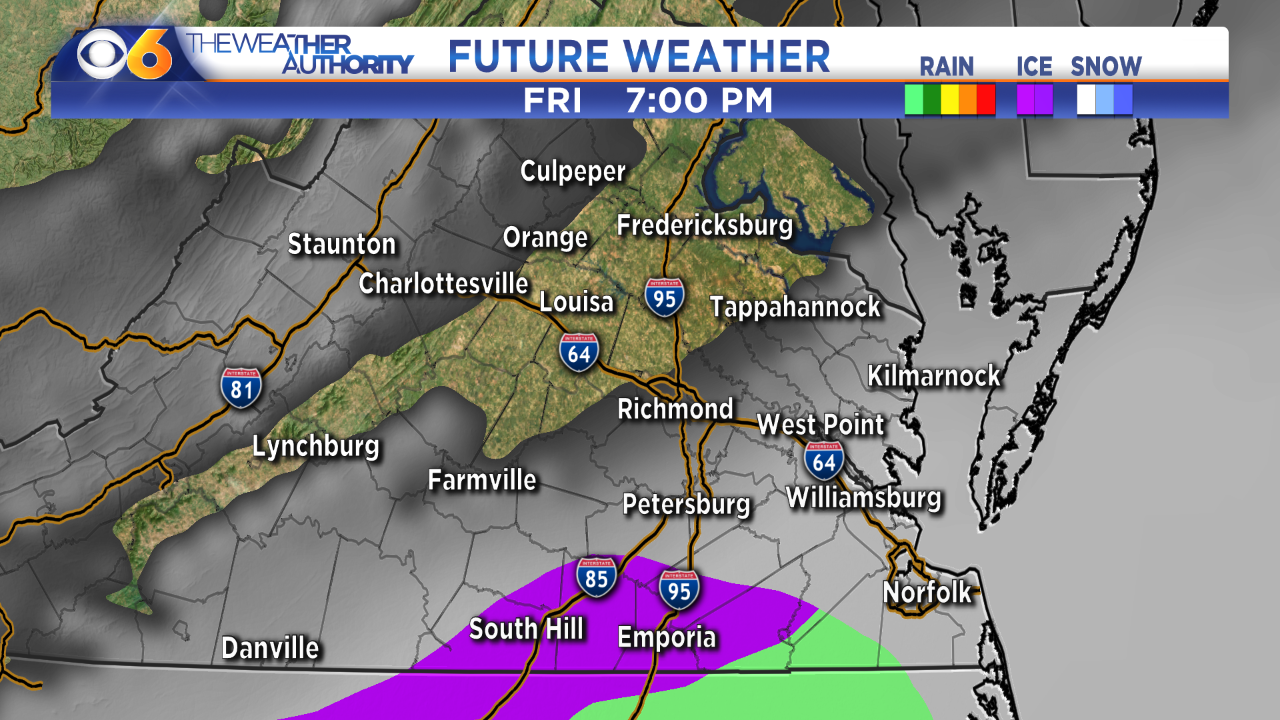 Snowfall amounts are still somewhat in question.  The computer models have been trying to produce precision of a system which has been over the Pacific Ocean the past few days.

That disturbance has now moved into the western United States, so it is now in a location where more data can be obtained.  This should produce better forecast output for the models.  The consensus of the models has been to put the best chance of seeing accumulating snow across far southeastern Virginia.

Snow should begin Friday evening, after the evening commute, and continue into Saturday morning.  Temperatures Friday night will drop into the 20s, making the snow very powdery.

Snow will taper off from northwest to southeast by late Saturday morning.  Highs Saturday afternoon will be around freezing.

With the current proposed storm track, snowfall well north and west of the metro will be pretty light, a coating to an inch.  Within the metro, 1-3" will be possible, and some higher 3"+ amounts may occur across far southeastern Virginia.

Please keep in mind the storm is still over two days away, and as more data becomes available, the forecast will be updated and fine-tuned.

A shift in storm track of just 25-50 miles will make a big difference between no snowfall or a higher accumulation.

If you have been surfing the internet, you have likely seen snowfall maps posted of insane amounts of snow.  Please remember that sort of thing happened many times last winter, and all of those maps were way overdone.  Many people swear by the accuracy of the European model (aka "the Euro").  It did not handle a recent storm in New England very well at all.  The Euro has flip-flopped on snowfall forecasts for this storm about every other day.  As of Wednesday afternoon, the latest run of the Euro has majorly decreased the snow amounts for Virginia.

Our snowfall forecasts rarely, if ever, mirror one specific model or one run of a model.  We will have more about this storm over the next few days.