RICHMOND, Va. — Supporters for Richmond mayoral candidates Joe Morrissey, Jack Berry, and Levar Stoney got a big surprise Tuesday evening. It began when it became clear that Morrissey, the presumed front-runner, was not going to win the election, and continued when it appeared Stoney might win without having to go to a two-candidate runoff that many anticipated.

Stoney had been in third place in most pre-election polls, but took the lead in the race late on Tuesday when most votes, with the exception of the absentee ballots, were counted.

It was still unclear Wednesday morning whether Stoney was able to win five of the nine districts in Richmond outright and would be the new mayor, or whether he would face Berry for a runoff election in December. The counting of 9,000 absentee ballots was still ongoing.

While Michelle Mosby and Lawrence Williams were not able to compete with the three top candidates, supporters for Stoney, Berry, and Morrissey went through a long evening with cheers and tears.

Reporters from VCU’s iPadJournos project visited the election parties of the three candidates. 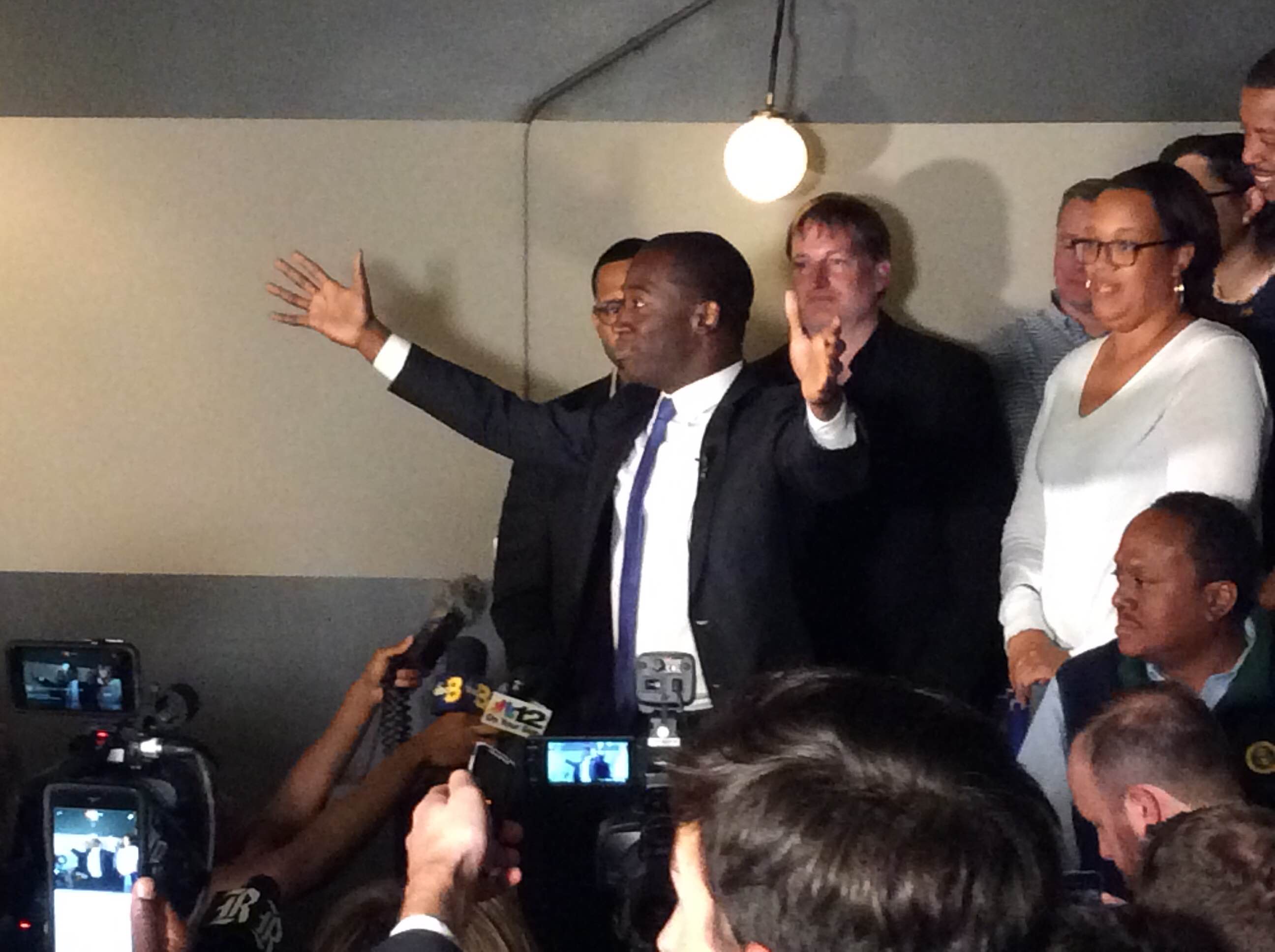 Levar Stoney’s supporters showed out in full force to his election party at the Wong Gonzalez restaurant and bar on East Grace Street for a night full of dramatic highs and lows. While the Democratic Party struggled in the presidential race, Stoney steadily gained  momentum in the mayoral race throughout the night and eventually won and led in the 2nd, 3rd, 5th, 6th and 7th districts.

While it was still unclear whether Stoney is the outright winner of the election or whether he has to face Jack Berry in a runoff in December, the cheers of his supporters were loud when Stoney joined the party after most of the votes were counted.

“In the beginning of this race, people told me that I should wait my turn. People told me that I am way too impatient. Tonight I will tell you that impatience is a virtue,” Stoney said in front of the crowd. “I was impatient because we have been unable to deliver basic services like broken sidewalks, fixing potholes, collecting the leaves, cutting the grass. Ladies and gentlemen, I don’t apologize for being impatient. You, the city of Richmond, we’ve been patient for far too long.”

Some supporters were at the event for more than six hours, mingling, and tracking the national and local election results throughout the night. One of the first to get to the election night party was Jenson Larrimore, an advocate for the disabled community. He said that he’s been tracking Stoney’s popularity since the start of the race, and that he was sure of a Stoney win from the start.

“This guy and his campaign have put together a well-articulated message, but at the end of the day, it’s really who Levar is that started this ball rolling,” said Larrimore. “Like any good snowball rolling down a mountain, it starts small, but it continually picks up more and more. I would’ve been shocked if it had gone any other way.”

Another supporter, Elizabeth Charity, said that Stoney is ready to take on the responsibility of being Richmond’s new mayor.

“I believe he’s been prepared for a time such as this,” said Charity. “Because of his background and because he knows what the city is feeling right now, he knows the city. With his experience as a state representative, this is where the both of those qualities can work together; his knowledge of the state as well as his knowledge of the city. It makes him more than qualified.”

While many of Stoney’s opponents have criticized his lack of experience, Dana Henry saw Stoney’s age and his connection to the community as a big plus.

“He’s young, he’s creative and I think he will bring some great change to the city,” said Henry. “Definitely to improve Richmond public schools. They’re having some issues there so I would definitely like to see some improvement there.”

“For us, this was always a marathon, it wasn’t a sprint,” said Corridoni. “We were planning on peaking at the right time and really making sure Levar’s message resonated with individuals at the right time. He laid out very impressive credentials and you saw voters responding to that today.”

Jack Berry’s supporters gathered in the historic Robinson Theater in Church Hill to celebrate an anticipated strong showing of their candidate. The mood was joyful throughout most of the night as early returns showed Berry ahead by a wide margin. Victory seemed all but certain.

“I’m feeling really good, it looks like we definitely won the popular vote, which I think is a big indication that we really united the city,” said Jimmie Lee Jarvis, a campaign field organizer early in the evening.

As the night wore on, the early lead began to erode and gains were recorded for Stoney. As more and more returns came in, Berry’s advantage became smaller and smaller, finally being eclipsed by the former Secretary of the Commonwealth.

Despite the developments, the mood remained upbeat. When word came in that Joe Morrissey had conceded defeat, the crowded showroom filled with cheers.

“Jack Berry’s the man, he’s a sweet man,” said Todd Hursty, who had been dancing for joy with his wife after hearing that Morrissey conceded defeat. “He deserves it. It seems like something he wants to do.”

Berry supporters watched CNN election coverage on two large projector screens. Applause followed every Clinton state victory. Although the crowd was up to the minute on the presidential race, accurate numbers on mayoral votes were harder to come by. Many Berry supporters went through the evening on early reports of assured victory, but others became noticeably less certain as news of Stoney’s growing advantage trickled in.

After a brief appearance around 9:30 p.m., Berry disappeared upstairs. As hours passed, anticipation grew. The audience began to thin as midnight approached. After two suspenseful hours, Berry finally reappeared. He admitted that there was no way to know who the next mayor would be.

Morrissey admits defeat among his supporters

Joe Morrissey’s supporters waited in his campaign office and watched the TV election coverage as they waited for candidate to arrive at his election party. Despite Morrissey’s latest scandal involving explicit text messages sent to a former law client, supporters remained confident.

“Joe actually interacts with the citizens, the people actually know him. I went to maybe 12 different residences in one day, and he can name almost every three or four people that he met in every house. I feel like he’s going to have a great turnout,” said Taquisha Jeffries, a campaign volunteer. Like many party attendees, Jeffries had actively contributed to Morrissey’s campaign efforts over the past few months.

“In my sense, Joe’s done everything he’s supposed to do. His folks have fought furiously his whole campaign. They’ve been disciplined, they’ve been enthused, and in terms of the numbers I just can’t know,” said Marty Jewell, a former city councilman who supported Morrissey. He said he had a good feeling about how Morrissey would perform in the 5th District in particular.

Before Morrissey showed up at the party, campaign manager Deborah MacArthur Repp shared that she wasn’t sure what the outcome of the mayoral race would be.

“I have no idea how this is going to turn out,” Repp said.

She added that she was proud of their campaigns efforts, but was looking forward to it being over.

As updated polls placed Morrissey third behind Berry and Stoney, the atmosphere in the office grew subdued.

They shook hands and hugged volunteers and friends, and Morrissey paused in front of the TV as he read the latest polling reports.

Asked how he was feeling upon walking in, Morrissey admitted his grim fate.

“I don’t think anyone’s given up yet,” said supporter Sandra Crenshaw about the dispiriting election numbers. She said she liked Morrissey's fighting spirit: “Anytime you step outside the box, you’re gonna step on toes. And that just goes with the territory.”

While supporters acknowledged the scandals plaguing Morrissey’s campaign, the general response was one of a desire to move forward.

“Nobody is perfect, we all make mistakes in life, but the work ethics and being able to fight back from whatever you face is what drew us to Joe,” said Stewart Meade, a longtime Morrissey supporter.

But other Richmond voters were not as forgiving.

Morrissey stayed glued to the TV as he watched the district polling numbers before huddling with his campaign advisors. At 10 p.m., the Morrisseys took to the podium.

Myrna Morrissey spoke first about the hurtful backlash from her husband’s campaign, pausing to wipe tears. She called the more than 10-month long campaign “grueling” and “stressful,” but also commented on her husbands strength.

“My husband is a strong, very strong man, tough as ya’ll know calls himself a fighter, and he definitely is,” said Myrna Morrissey. As she finished, the crowd shouted, “We love you, Myrna!”

Although his wife shared at the time that she was still holding on to some hope, Joe Morrissey seemed to have accepted his fate, starting his address to the crowd with congratulating Levar Stoney and Jack Berry. He added that although Myrna wasn’t sure of his standing, he was.

In his speech, Morrissey acknowledged the possibility of a runoff election between Stoney and Berry, and publicly conceded his defeat.

“I was pleased to run with some really, really, exceptional candidates,” Morrissey said.

He addressed his latest texting scandal with former client, Kanika Morris as “the definitive point of the campaign,” in terms of influencing voter outcome, but said he was proud of the support he had gathered during his mayoral run.

Myrna Morrissey quickly chimed in as a reporter dug for more clarification. “I don’t think we’re here to talk about that,” she said.

Although his campaign had hoped to win six districts, Morrissey shared that life doesn’t always go the way we hope.

“But that’s life, things don’t always go the way you want it, and I accept that, and you just move forward, man,” he said.

As far as endorsing Stoney or Berry in a possible runoff, Morrissey said it was too early to say. “I’ll talk with both of them, and it’s important that they share my views for standing up for the little guy,” he said.

“I still don’t feel any different about him,” said Jeffries as the Morrisseys prepared to depart the party. Supporters offered hugs and words of encouragement as they made their way to the door.

This story was reported by Rodrigo Arriaza, Alexander Austin, Cydni Gordon, Amelia Heymann, Gregory Kremer, and Amy Lee. These student reporters are part of the “iPadJournos” mobile and social media journalism project, a cooperation between WTVR.com and VCU’s Richard T. Robertson School of Media and Culture.