The protesters flooded the streets and interstate, yelling obscenities and voicing their displeasure with the election of Donald Trump.

Protesters made their way from VCU's Monroe Park campus onto Broad Street and Belvidere, down to the Interstate 95 south ramp.

Protesters briefly blocked the interstate, causing traffic to stop on I-95 southbound.

State Police says they were called to the scene around 9:54 p.m. to assist with the mass of protesters on the interstate.

“State troopers responded to the location to guide the protesters off the interstate – for their safety and the motoring public’s safety,” said State Police spokeswoman Corinne Geller. “Due to it being dark outside with limited lighting, and the blind curves and ramps along this particular stretch of I-95, it was an extremely dangerous situation for any pedestrian traffic.”

The interstate was cleared of all protester by 10:34 p.m. No arrests were made in this particular incident. 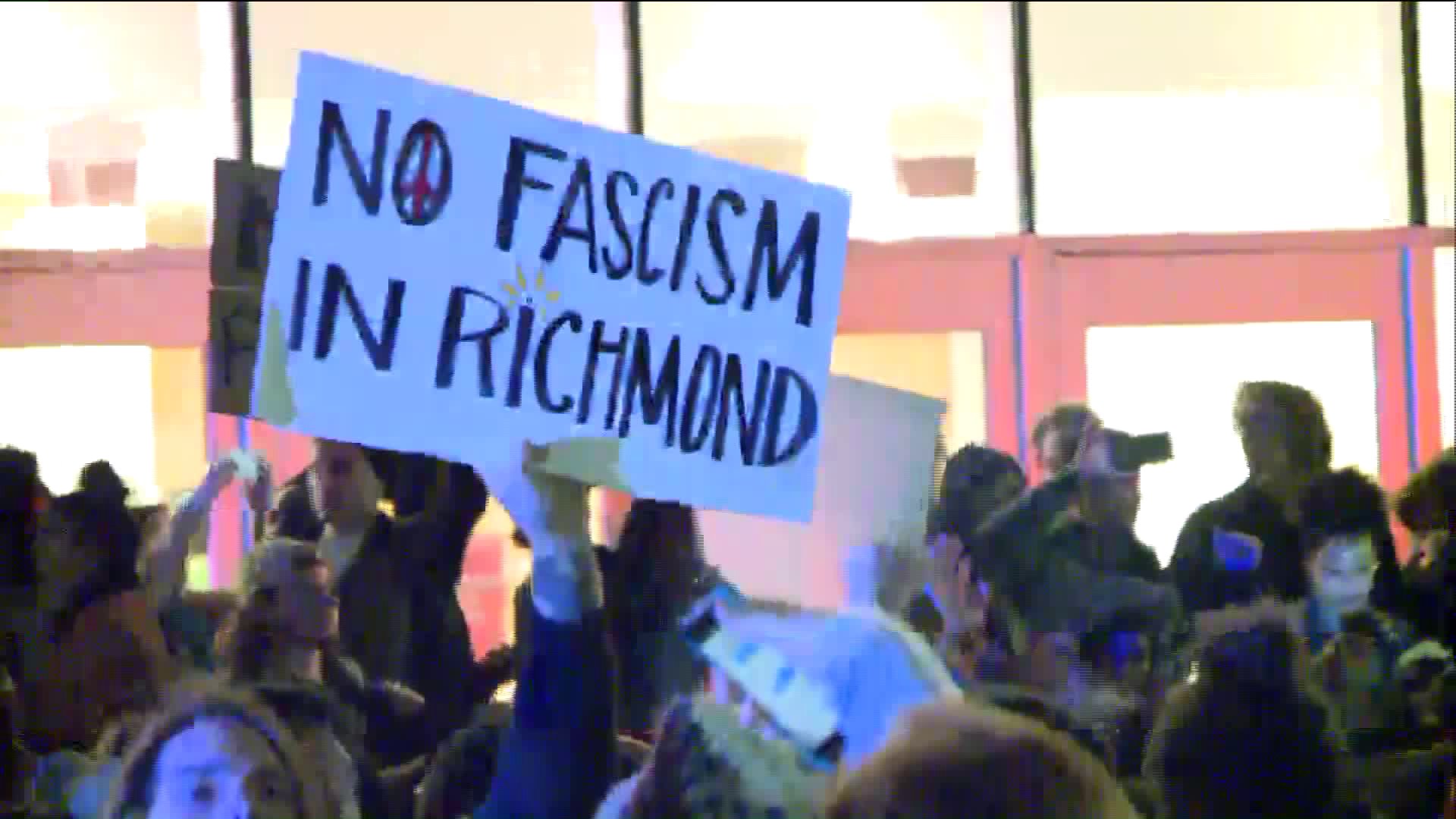 The group then made their way throughout Jackson Ward and Gilpin court, before ultimately heading west back on VCU's Monroe Park Campus.

State Police says a large group of protester then made their way onto Interstate 195/Downtown Expressway at 11:39 p.m.

They say the protesters sat down in the travel lanes of I-195.

“Despite the state police’s attempts to communicate with the protesters about their need to disperse and leave the interstate, the large group of individuals refused,” said Geller.

A total of 10 protesters were arrested and charged with unlawful assembly and for being pedestrians on an interstate.

Police say the six females and four males arrested range in age of 20 to 26 years of age.

The remaining protesters exited I-195 and it was reopened to through traffic by 12:15 a.m. Thursday.

The Republican Party of Virginia confirmed their headquarters at 115 East Grace Street was vandalized during the protest. The damage was to the building's windows, graffiti on the doors, and the doorbell was broken.

A statement by GOP Chairman John Whitbeck read in part, "The violent protests that led to the vandalizing our headquarters is unacceptable but not unexpected...We will move forward - not intimidated but vigilant - and pray that this Nation will come together just as Secretary Clinton, President Obama and President-Elect Donald Trump have stated."

Protests have been a theme throughout the day as several high schools and universities across the country walked out of classes.

The protests are taking place in at least seven major cities, according to CNN, including Chicago, Philadelphia, Boston, New York and Seattle, among others.

Thousands of protesters targeted Trump buildings in New York and Chicago on Wednesday, chanting anti-Trump slogans as protests against President-elect Donald Trump popped up throughout the United States.

In Austin, Texas, protesters blocked a highway. Students burned a flag on the campus of American University in Washington, and they walked out of class in high schools and colleges across the country the day after the presidential election.

"Not my president, not today," was a chant heard at protests from Boston to Los Angeles.

"We can't let it stop us. If he's the president then fine, but if Donald Trump is gonna be it then he has to listen," she said.

At Berkeley High School in California, about 1,500 students walked out of classes Wednesday morning. In Des Moines, Iowa, it was hundreds of high school students who left class to protest of election results. In Phoenix, about 200 students from Carl Hayden High School marched to the state Capitol in protest.

Chicago police have blocked the bridge and roads to Trump Towers doorstep to stop protesters from entering. pic.twitter.com/4rdNeqXjtg

Hundreds are now gathered on the Boston Common and many more are streaming in to protest Donald Trump. pic.twitter.com/KZTjPPyXvW