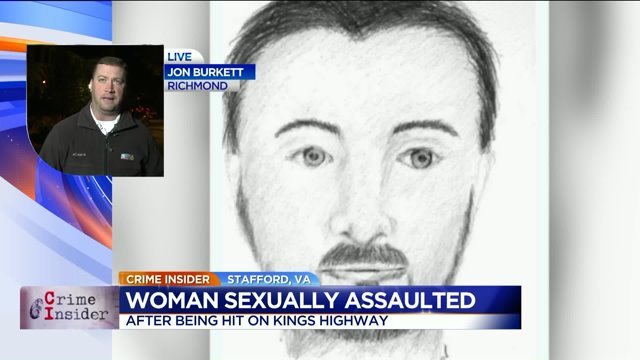 STAFFORD COUNTY, Va. -- A woman was sexually assaulted for nearly two hours in a ditch early Monday morning after a man hit her car and forced her off the road on Kings Highway (Route 3) in Stafford County, according to deputies.

The incident happened between 2:45 to 3:15 a.m. Monday as both vehicles were traveling eastbound on Kings Highway, according to the Stafford County Sherriff’s Office.

"After the accident, the unknown male suspect forcibly removed the victim from her vehicle and dragged her into a ditch off the roadway where he sexually assaulted her over a two hour period," officials said in a news release.

Once the suspect drove away, the victim made it back to her vehicle and called 911.

A deputy arrived at the scene just as she was calling for help.

The suspect is described as a Hispanic male about 30 years old. He was between 5 feet 8 inches and 5 feet 9 inches tall and weighed between 170 to 180 pounds.

He had black hair and a short black beard.

The victim said her attacker spoke both Spanish and broken English.

He left the scene in his dark-colored SUV and headed east on Kings Highway.

Deputies said there may be orange paint transfer and damage to the passenger side front quarter panel and/or front end of his vehicle.

If you saw anything suspicious between the hours of 2:30 a.m. and 5 a.m. along State Route 3 between Forest Lane Road and the entrance road to the water treatment plant, call the Stafford County Sheriff’s Office at 540-658-4400. Anonymous tipsters can receive up to $1,000.00 in cash reward.

SHARE on social media to SPREAD THE WORD!
38.263209 -77.414337
Copyright 2020 Scripps Media, Inc. All rights reserved. This material may not be published, broadcast, rewritten, or redistributed.