HENRICO COUNTY, Va. -- A Henrico mother and cancer survivor received the surprise of a lifetime during a recent cheer and dance expo at Highland Springs high school.

Shirelle Scott said she thought the competition was like any other, but the cheerleaders and coaches for Henrico High School had different plans.

The cheer team had been planning a special tribute to honor the breast cancer survivor for two weeks.

Shirelle was diagnosed in January of 2015. After months of radiation and chemo therapy, doctors declared her cancer in remission in May of this year.

Sunday, Shirelle said she was seated on the bleachers watching the competition when everything changed.

“All of a sudden the music stopped and it went into a beautiful moment,” she said.

That’s when one of the coaches grabbed her hand and presented her with a dozen pink roses.

As the coach began to walk her onto the basketball court, people in the audience started shouting her name.

That’s when the cheerleaders formed a circle in the middle of a court. 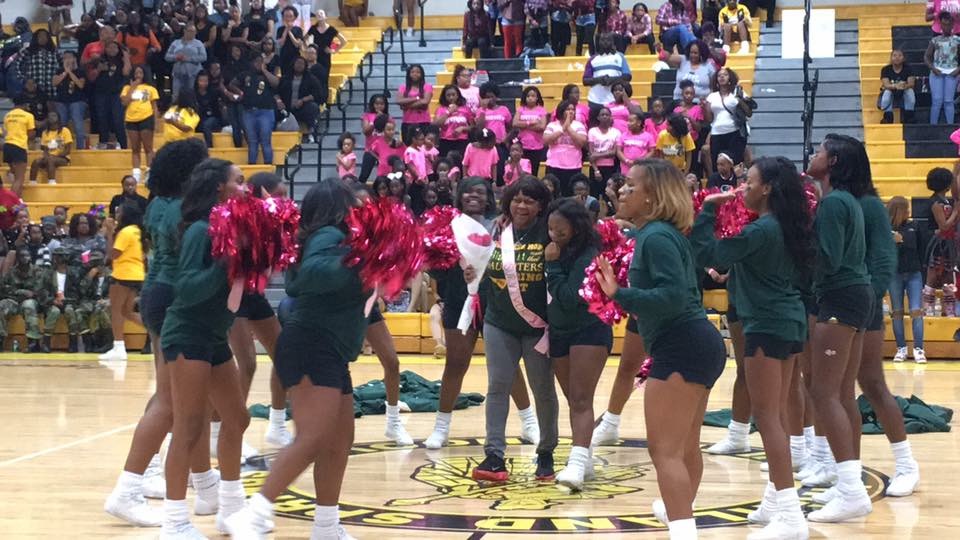 As the circle opened up, Shirelle’s daughter, Kiara, who is also a Henrico cheerleader, waited at the end of the court.

“I was crying so hard, I didn’t even notice my daughter was at the end of the line,” she said.

The cheerleaders were wearing eye paint with the words, “Shirelle” and “survivor” to honor the woman who supported them, even while receiving cancer treatment.

Once Shirelle reached the end of the line, her daughter presented her with a pageant sash that read “Our Survivor.”

“I never felt anything like that,” she said. “It was the best moment of my life.”

The cheer team continued the tribute by doing some routines with Shirelle and Kiara embracing each other in the middle of the court.

The beautiful moment was captured on camera by those in attendance.

“I was speechless,” she said. “They could have done anything they wanted to and they chose to do this for me.”

Shirelle said she wanted to thank the cheerleaders and the coaches who were involved in the special tribute.

“This is something I will forever hold in my heart,” she added.

The Henrico mother said the moment means so much because, “a lot of people think that when you finish your treatment everything is OK, but it’s still a struggle.”

“I wanted to give up, but I couldn’t because of my child. There is no giving up… And I made it through,” she said.