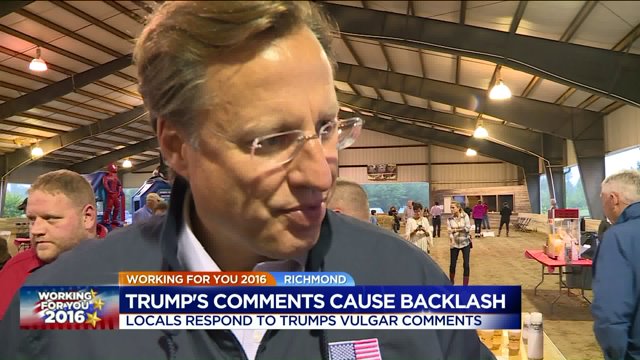 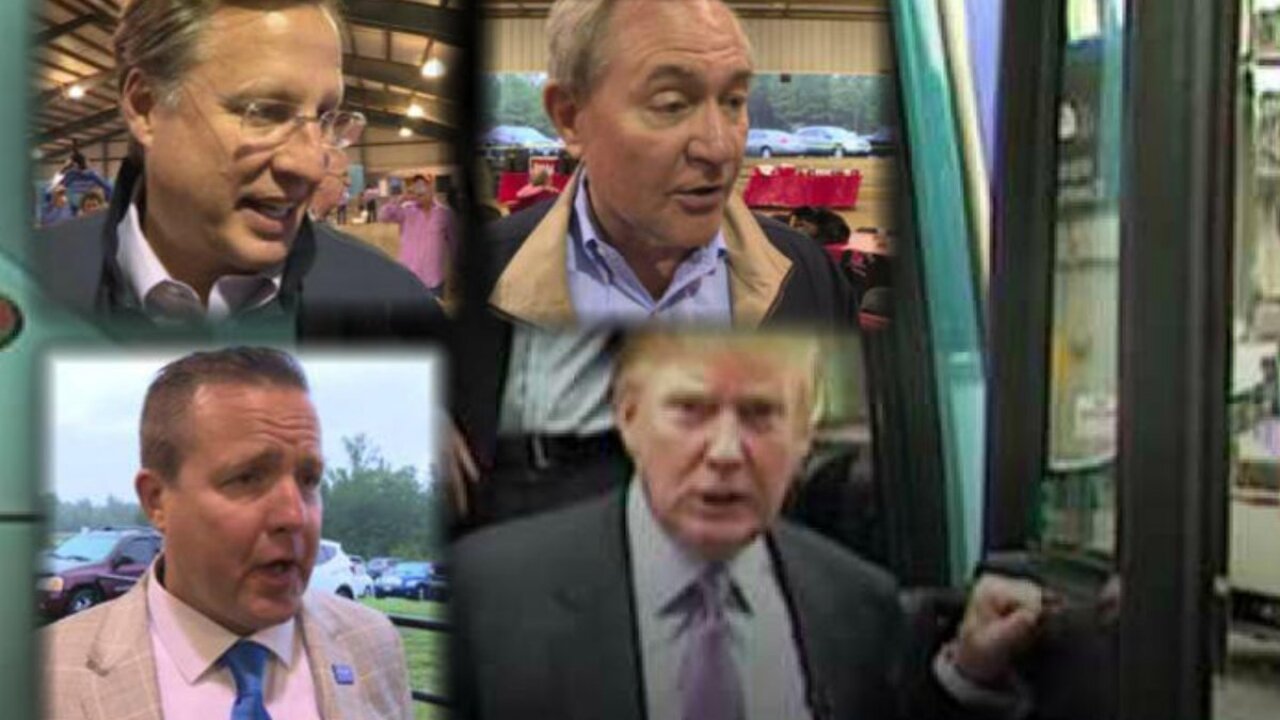 WASHINGTON -- Republican elected officials and party elders lined up Saturday to denounce Donald Trump's incendiary remarks about women that he made in 2005.

Some sitting members of Congress pulled their support entirely, while others blasted the remarks but continued supporting the GOP standard-bearer.

But others said they wanted Trump to step aside so that his running mate, Indiana Gov. Mike Pence, can lead the ticket.

WTVR CBS 6 reporter Sandra Jones caught up with some prominent Virginia Republicans at a political fundraiser in Chesterfield County Saturday.

Rep. David Brat, R-10th, who faces Democratic challenger Eileen Bedell in November, declined comment on the issue and pointed Jones to a statement posted on his Facebook page Saturday afternoon.

"I'm just going to leave it at my statement that's out there for right now,” Brat said.

Donald Trump's comments are crude and I reject them totally. We all have an obligation to work every day to make sure that our language is precise and lifts everyone up at all times. This week I spoke at Glen Allen High School and that was the substance of my message; that we must lift each other up and be kind to the person sitting next to us because life is hard enough as it is without putting others down.
It's also important that we get the ethics right. As someone who attended seminary, I have made clear throughout all of my campaigns that we live in an age of ethical breakdown and one irony of this breakdown is that it appears the Republican side is held to an ethical standard that the left and Democrat candidates never have to face. I am proud that Republicans do believe in ethics and make our positions clear at every turn. The left and the press is now in full attack mode claiming that Trump's unethical remarks are disqualifying for the presidency, but that same ethical standard was not to be found when a sitting president acted out even more crudely in the Oval Office.
The good news --and there is always good news-- is that there is an intrinsic moral goodness in the American people and I trust them to assess the comprehensive and systematic worldviews and talents and leadership abilities of the candidates when they go to the ballot box in November.

However, Bedell, who supports Hillary Clinton, said she does not believe Trump's apology was sincere.

"It's not that it was offensive as to the choice of words, but the underlying sentiment, and the attitude that was reflected by that sentiment is just appalling,” Bedell said. "That is not someone I would want to come into the room with my young daughter, and quite frankly, it's not the type of person I would want my son to watch as the leader of my country."

Former Virginia Governor Jim Gilmore said Trump "shouldn't have said the things that he said, even back then,” but stressed the candidate has apologized.

"I think we need to focus on what's important for the people of the United States. And that's what he needs to do. And that's what I'm doing," Gilmore said when asked if the Trump campaign could recover from this latest blow. "It's important to think about the growth of the economy, jobs and opportunities.”

And with some calling for Trump to step down, the chairman of Trump’s Virginia campaign, maintained, as the candidate himself did earlier in the day, there is zero chance that will happen.

"No, he should never step down," Corey Stewart said. "Look, we always knew the establishment on both sides, the Republican establishment, the Democratic establishment they were going to come after us very, very hard. They're doing that now [by] trying to you know shake people up and try to dissuade them from voting for Trump for something he said in private 10 years ago.”

However, some Virginia Republicans are distancing themselves from Trump. In fact, Rep. Barbara Comstock, R-10th, called for Trump to drop out of the presidential race Friday night as news of the lewd video spread.

“This is disgusting, vile, and disqualifying," Comstock said. "No woman should ever be subjected to this type of obscene behavior and it is unbecoming of anybody seeking high office. In light of these comments, Donald Trump should step aside and allow our party to replace him with Mike Pence or another appropriate nominee from the Republican Party. I cannot in good conscience vote for Donald Trump and I would never vote for Hillary Clinton.”

Some party members who were lukewarm on Trump ran away from the nominee shortly after the comments came to light.

Idaho Sen. Mike Crapo on Saturday became the first sitting Republican senator to back away from Trump following the incendiary comments. "This is not a decision that I have reached lightly, but his pattern of behavior has left me no choice. His repeated actions and comments toward women have been disrespectful, profane and demeaning." Soon after Crapo's announcement, Ayotte also said she would not vote for Trump. In August, Ayotte had said she would vote for Trump but not formally endorse him. She said Saturday she will instead be writing in Pence on Election Day. Arizona Sen. and former Republican Party nominee John McCain said Trump's behavior "make it impossible to continue to offer even conditional support for his candidacy." Former Secretary of State Condoleezza Rice declared "Enough!" in a Facebook post, adding, "Donald Trump should not be President. He should withdraw." Alaska Sen. Lisa Murkowski said Trump has "forfeited the right to be our party's nominee." In the House, Alabama Rep. Martha Roby said Saturday she will not vote for him. Roby is from a safe district and is often featuring in GOP family friendly initiatives. Maine Sen. Susan Collins said she is "still not voting for Hillary, and still plan to write in someone." Alabama's Republican governor, Robert Bentley, said in a statement he cannot and will not vote for Donald Trump."

Friday night, House Oversight Committee Chairman Jason Chaffetz became the first sitting Republican congressman to pull his support for Trump in the wake of the 2005 video, which was surfaced by The Washington Post earlier in the day. Utah Gov. Gary Herbert on Friday became the first sitting Republican governor to withdraw his vote over the comments, which he called "offensive and despicable."

Many Republicans, beginning on Friday night and into Saturday, slammed Trump over the remarks but either said he was preferable over Democrat Hillary Clinton or didn't address their support for him at all.

Pence said he does not "condone" Trump's remarks and "cannot defend them" but is "grateful that he has expressed remorse and apologized." Texas Sen. John Cornyn, the No. 2 Senate Republican, tweeted he is "disgusted by Mr Trump's words" and is "profoundly disappointed by the race to the bottom this presidential campaign has become." House Majority Leader Kevin McCarthy said "there is absolutely no place" for Trump's language in American society and that he "must" make a "full and unqualified apology." Top Trump surrogate Ben Carson said "in no way do I condone Trump's behavior" but said he was "fairly certain" progressives knew about Trump's 2005 remarks but waited until now to damage his candidacy.

Louisiana Rep. Steve Scalise said "women deserve to be treated with respect. Period," and that Trump should make "a direct apology." Iowa Sen. Joni Ernst, a rising star in the party, called Trump's remarks "lewd and insulting." Kentucky Sen. Rand Paul called Trump's comments "offensive and unacceptable" -- but a spokesman didn't respond when asked if Paul was still going to vote for Trump

South Dakota Sen. John Thune, the No. 3 Senate Republican and a member of Majority Leader Mitch McConnell's inner circle, wants Trump to "withdraw," saying, "Mike Pence should be our nominee effective immediately." Nevada Rep. Joe Heck -- who is running for Democratic leader Harry Reid's Senate seat -- said Trump should "step down and allow Republicans the opportunity to elect someone who will provide us with the strong leadership so desperately needed." South Dakota Gov. Dennis Daugaard is backing Pence tweeting that "enough is enough" and "this election is too important" to keep backing Trump. Dan Sullivan, Alaska's junior Republican senator, called on Trump to step aside for Pence as the billionaire "can't lead on critical issue of ending domestic violence and sexual assault." "It would be wise for him to step aside and allow Mike Pence to serve as our party's nominee," Nebraska Sen. Deb Fischer tweeted. Rep. Ann Wagner, R-Missouri, wrote, "I withdraw my endorsement and call for Governor Pence to take the lead so we can defeat Hillary Clinton." Colorado Sen. Cory Gardner said if Trump wishes to defeat Clinton, he must "step aside," adding, "I will not vote for Donald Trump." Utah Sen. Mike Lee posted a Facebook video asking Trump to step down: "Your conduct, sir, is the distraction." Illinois Sen. Mark Kirk tweeted that Trump should drop out and that Republican Party leaders should engage rules for an emergency replacement.

Republicans who have opposed Trump for months were only too happy to once again declare their opposition to him.

Former presidential candidate Jeb Bush said that "no apology can excuse away Donald Trump's reprehensible comments degrading women." Ohio Gov. John Kasich on Saturday made it clear he would not vote for Trump, adding, "Nothing that has happened in the last 48 hours is surprising to me or many others." Nebraska Sen. Ben Sasse tweeted, "character matters" and said Trump should "make an honorable move" and "step aside & let Mike Pence try." Former California Gov. Arnold Schwarzenegger -- who campaigned with Kasich during the primaries -- said Saturday this election will be the first presidential contest where he won't vote for the GOP candidate. And former Hewlett-Packard CEO Carly Fiorina -- a Trump rival during the primary season -- issued a statement backing Pence and saying, "Donald Trump does not represent me or my party."