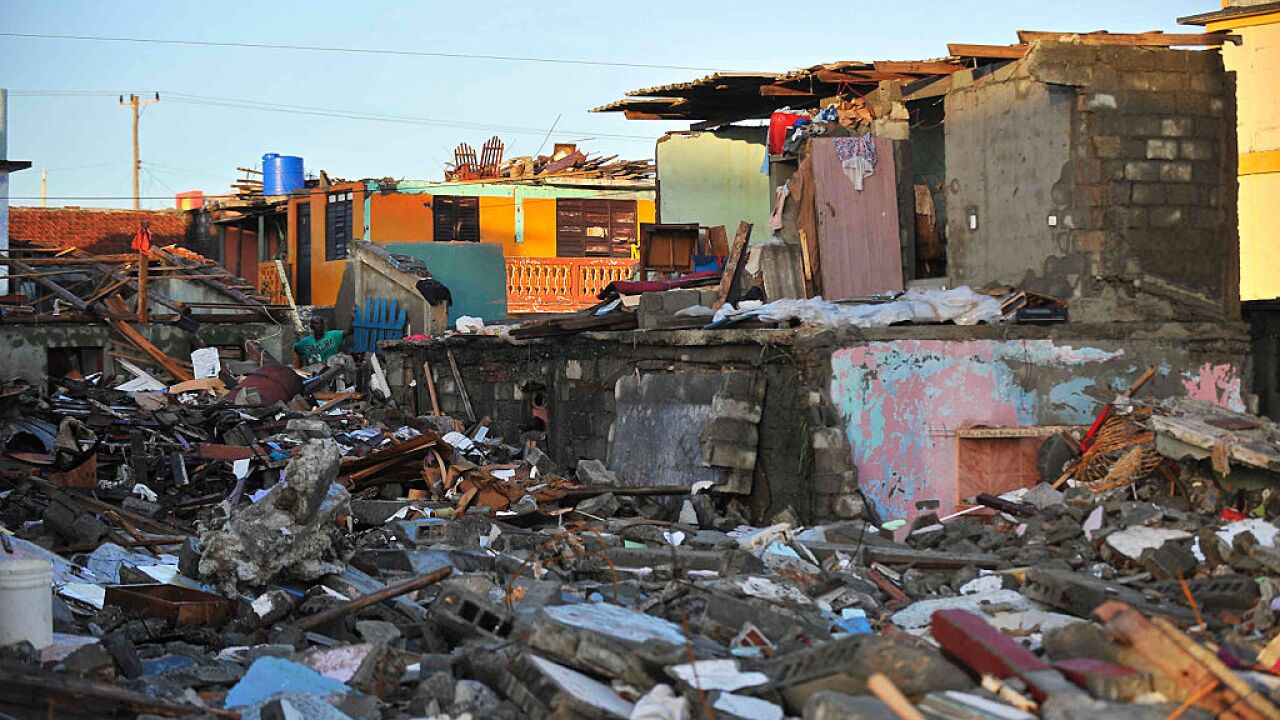 Inhabitants of Baracoa, Guantanamo province, east of Cuba clean up after hurricane Matthew passed through the place on October 7, 2016. Hurricane Matthew moved toward Florida’s east coast Friday after leaving a trail of destruction in Haiti, Cuba and the Dominican Republic. / AFP / YAMIL LAGE (Photo credit should read YAMIL LAGE/AFP/Getty Images)

Inhabitants of Baracoa, Guantanamo province, east of Cuba clean up after hurricane Matthew passed through the place on October 7, 2016.
Hurricane Matthew moved toward Florida’s east coast Friday after leaving a trail of destruction in Haiti, Cuba and the Dominican Republic. / AFP / YAMIL LAGE (Photo credit should read YAMIL LAGE/AFP/Getty Images)

Haiti had only just begun rebuilding from a devastating earthquake six years ago when Hurricane Matthew tore through the small Caribbean nation on Tuesday, killing hundreds in its path and inundating entire villages.

Once again much of the country is a disaster zone, with powerful Matthew shredding homes and engulfing communities in knee-deep water that is taking time to recede.

At least 300 people have died since Matthew made landfall in Haiti on Tuesday as a Category 4 hurricane, according to Paul Altidor, Haiti’s Ambassador to the US.

“We expect unfortunately that number to rise a little bit as we begin to access communities, regions that were inaccessible because of the roads, because of the bridges that fell due to the hurricane,” Altidor told CNN’s Wolf Blitzer.

Communication is still an issue in Southern Haiti, where winds of 125 mph (200 kph) destroyed homes, flooded villages and cut off the island from the rest of the country.

“The southern peninsula has been devastated,” said US Navy Rear Adm. Cedric Pringle, commander of the Joint Task Force Matthew, after conducting an aerial tour of the destruction.

About 350 military personnel will be on the ground in Haiti by Saturday, Pringle said Friday in a briefing from Port-au-Prince. He’s in the Haitian capital to kick start humanitarian and disaster relief assistance to the country.

Ships from the Netherlands, France and possibly from the United Kingdom will also help, he said.

As the hurricane brushed the Florida coast Friday, US President Barack Obama urged Americans to donate to the American Red Cross and other philanthropic organizations to help Haiti and other affected countries.

“We know that hundreds of people … lost their lives and that they’re going to need help rebuilding,” he said at the White House.

For now, the focus is just reaching victims, because the only bridge linking the capital Port-au-Prince to the worst-affected region in the southwest had completely collapsed, said Ariel Dominique, head of community affairs at the Haitian Embassy in Washington.

She said crews are working on that bridge that spans the Rivière la Digue in Petit-Goâve to make it passable for large-scale aid deliveries.

Conduit roads too are blocked by collapsed palm trees and debris, forcing agencies to consider air dropping of supplies as the skies clear and flying becomes a safer option.

Grand’ Anse, and its capital Jeremie, is one of the worst affected areas, she said.

There was also extensive damage to crops along swaths of southern Haiti.

“We have nothing left to survive on, all the crops have gone, all fruit trees are down, I don’t have a clue how this is going to be fixed,” said Marc Soniel Noel, the deputy mayor of Chantal in the affected region.

“We’re really concerned about food security,” said John Hasse, National Director for World Vision, a US based humanitarian organization. He is currently in Haiti.

“A large portion of Haiti’s food is produced in the south where the damage is most severe. It is a large breadbasket for the country. We expect to see food shortages and/or price spikes throughout the country in the coming weeks and months. This has the potential for creating not only great need but also increased violence and instability.”

Hurricane Matthew’s ferocious impact left 350,000 people in need of assistance. The country’s civil protection authority said that 186 people were injured and more than 61,000 people were now in 192 temporary shelters.

There was a “massive influx” of people to the shelters, which are struggling to find space for people cramming together to sleep on the floor, said CARE USA emergency communications manager Holly Frew.

“The priority is to get food and water to these people. Of course aid agencies like us had supplies pre-positioned before the storm, but there’s only so much you can do in a storm this size, and as the the number of centers has more than doubled, the need has risen,” Frew said.

She explained that the people in the affected region had already been suffering from drought before the hurricane hit.

The impact of the hurricane immediately raised public health concerns, especially about the availability of clean water, food and shelter.

Partners in Health warned that the hurricane would likely worsen the country’s cholera epidemic.

Dave Brodsky, president of Chanje Movement, a California-based church partnership that has been working in Haiti since the 2010 earthquake, said it was the “poorest of the poor” that had been worst hit by the flooding.

UNICEF had warned on Wednesday that Haiti is facing the largest humanitarian crisis since the 2010 earthquake, which killed at least 220,000, injured 300,000 and displaced 1.5 million people.

Haiti was only just beginning the development phase to rebuild infrastructure following that earthquake, said Ines Brill, the International Federation of Red Cross and Red Crescent Societies representative for Haiti.

“This is an emergency after an emergency, which makes things more complex than a typical disaster,” she told CNN.

Haitian officials postponed the presidential elections, which had been scheduled for Sunday, due to the hurricane.