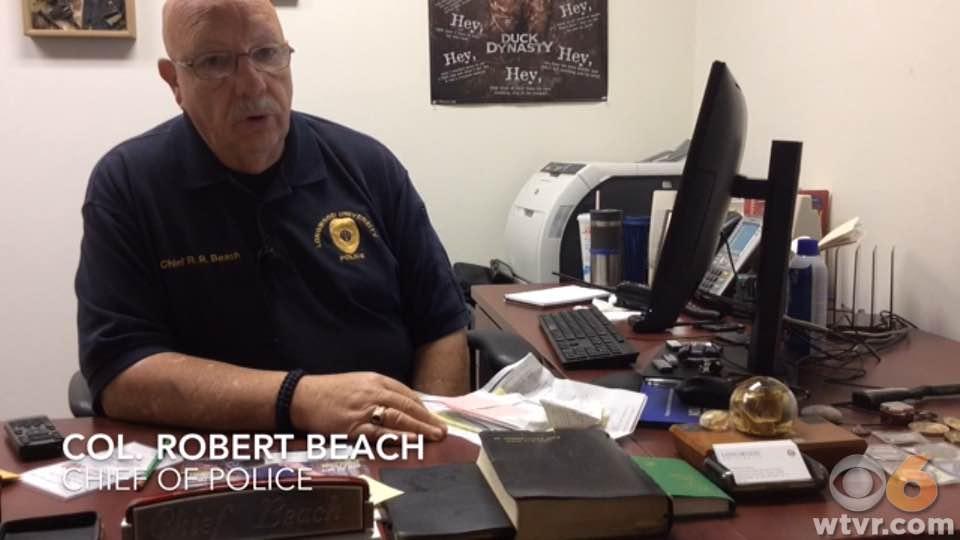 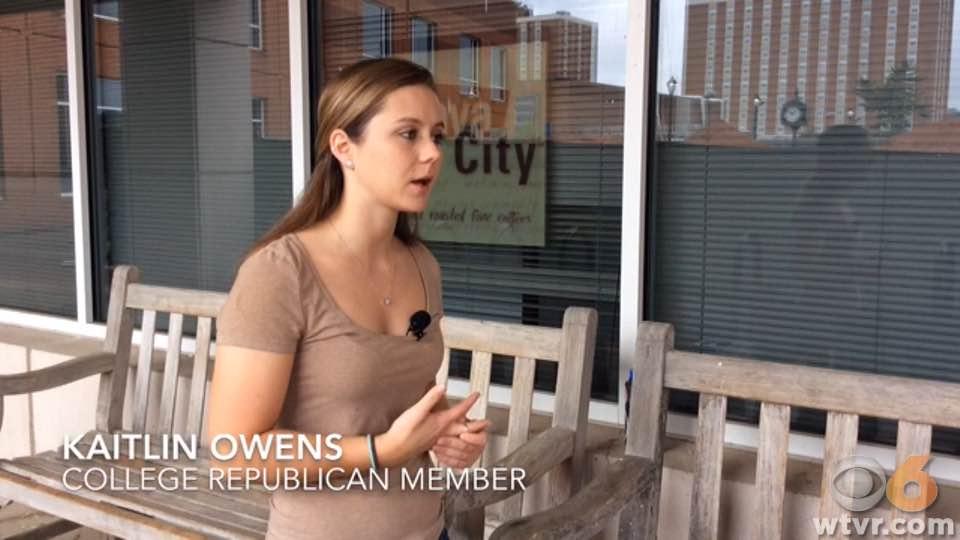 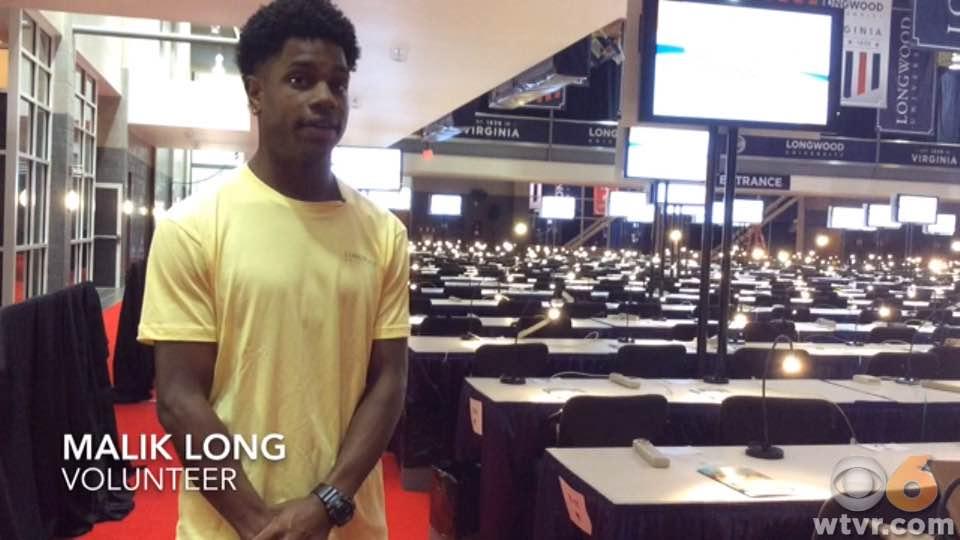 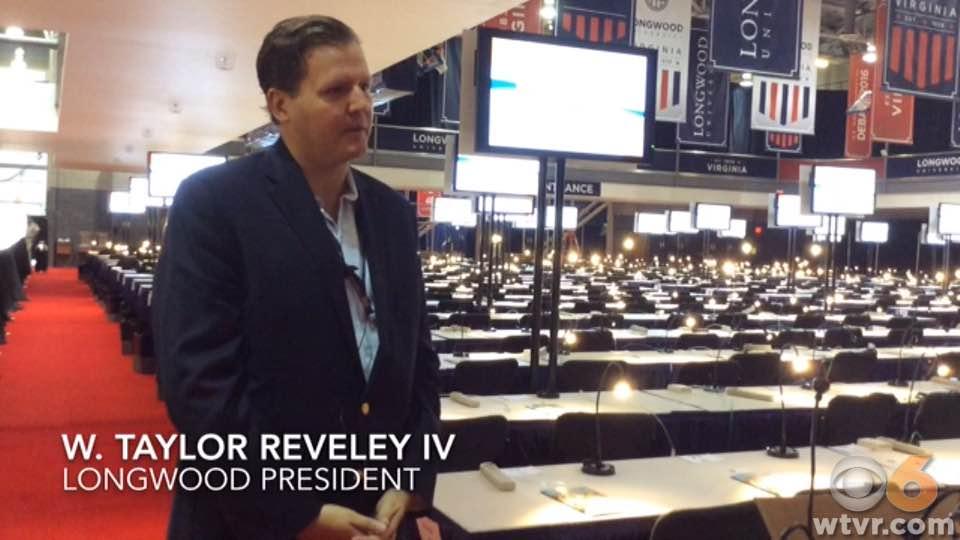 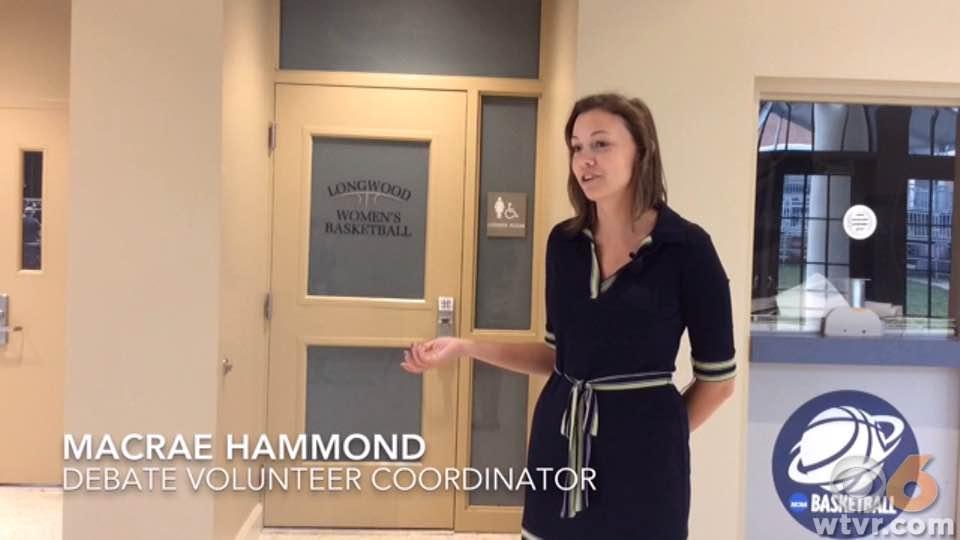 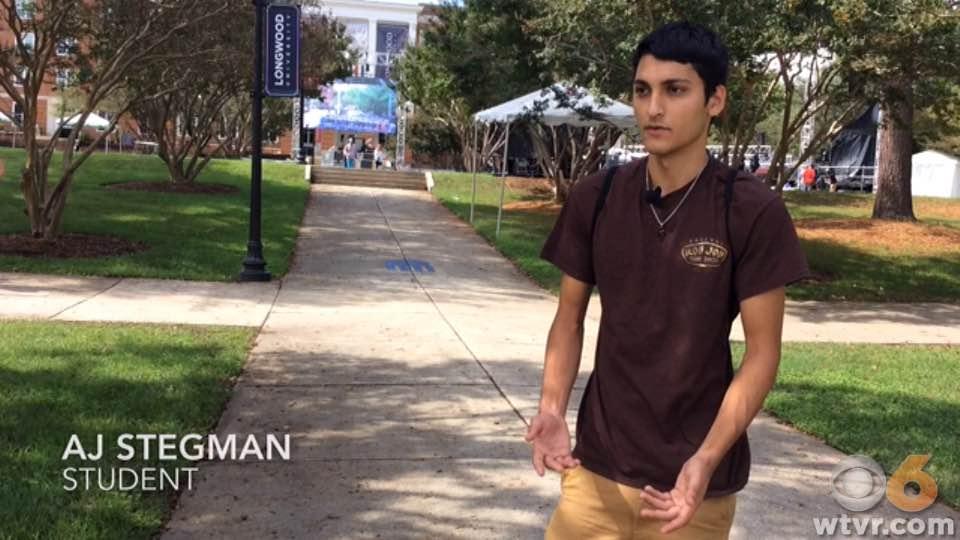 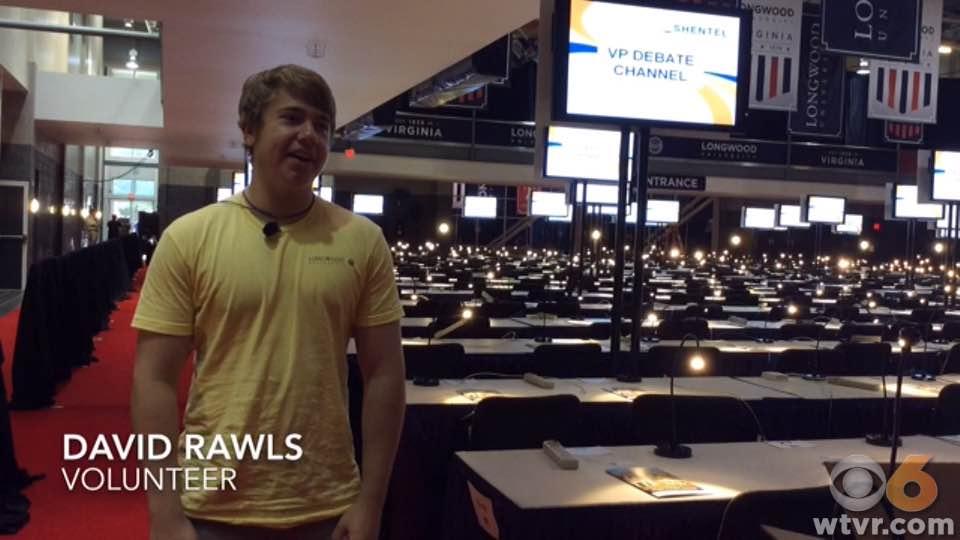 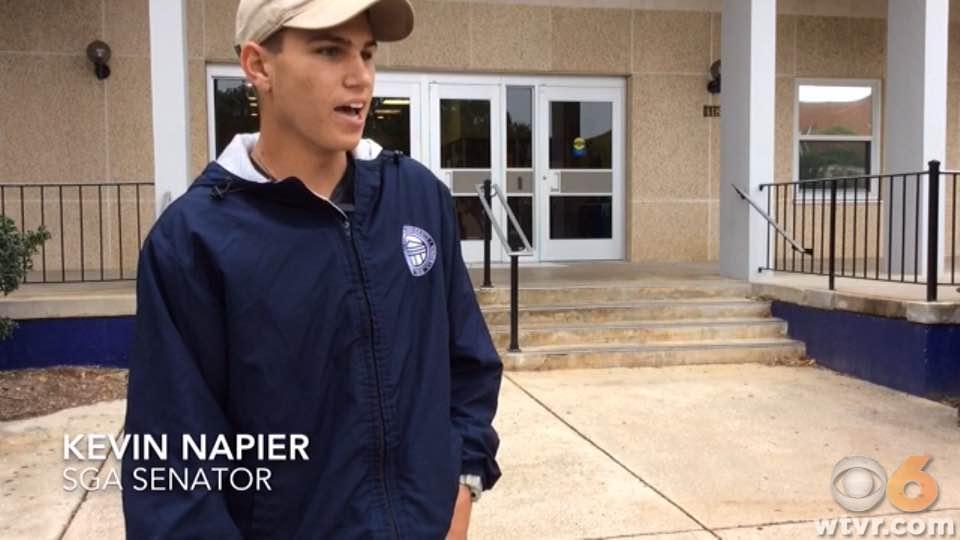 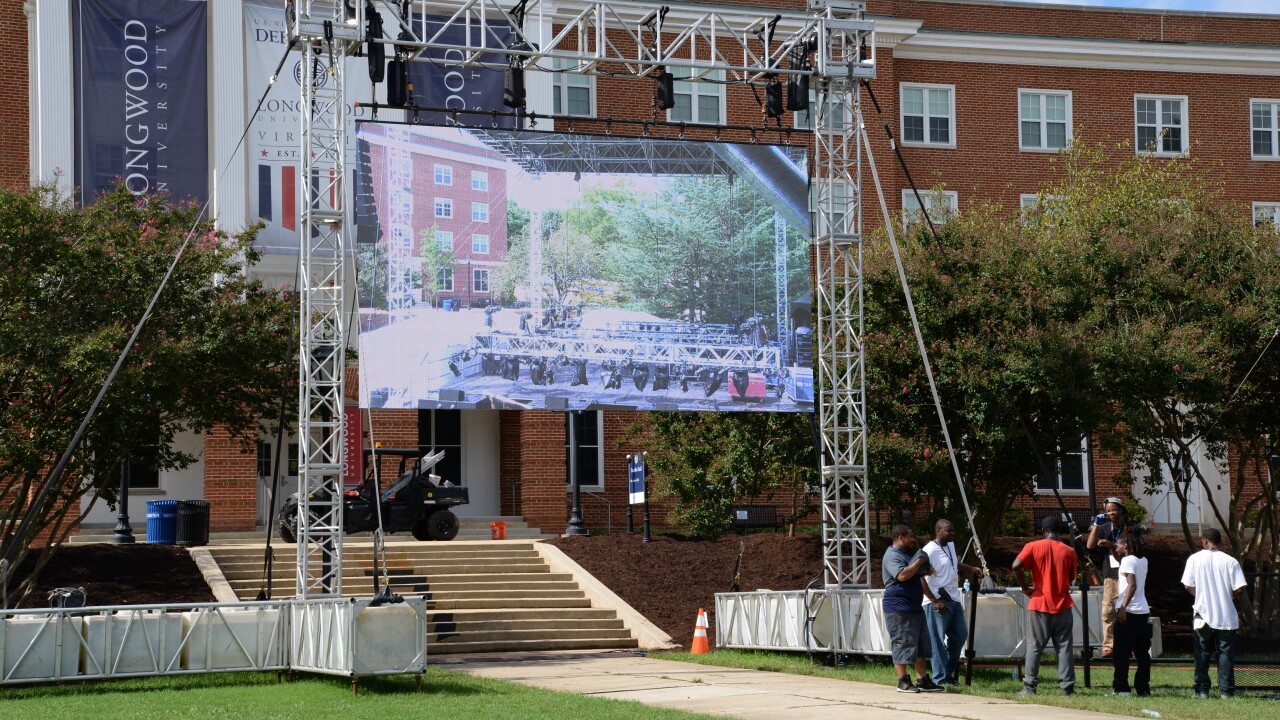 FARMVILLE, Va. — Longwood University has been preparing one year for this moment and its 5,000 students seem to be ready for the national spotlight. On Tuesday, vice presidential candidates Tim Kaine and Mike Pence will meet for their only debate in the basketball arena of the rural Farmville campus.

It will be the first debate in Virginia during a presidential general election campaign since President George H. W. Bush and challengers Bill Clinton and Ross Perot debated at the University of Richmond in 1992.

“It’s just really exciting because we’re starting to see on Fox and CNN and other channels ‘Longwood University,’” said Kevin Napier, executive senator for Longwood University’s Student Government Association. “We’re very excited to see our name getting out to the whole world.”

When it was announced a year ago that Longwood University would host the debate, Napier had been surprised. Because his university is small, he didn’t think it would be possible to host such a large event.

In the preparation, even some of Napier’s classes were canceled as his classroom building is used for the debate. “It’s a nice little break,” he said.

This weekend, students on campus said they were excited to be hosting the debate. And many of them are volunteering to make it a success, even though they have been officially on fall break during the last few days.

“We have a pretty small school, and I figured by volunteering it would help me get a sense of community for my school, and for our nation altogether,” said Junior David Rawls, who is volunteering over his fall break at the Media Center on campus.

Rawls said he chose to volunteer after seeing how much of an impact hosting the vice presidential debate would have on Longwood University.

Freshman AJ Stegman decided to stay on campus as well to be involved with all of the debate preparation and school events.

“Now that I can vote finally, I think it’s really important that I be able to see every angle of what I can,” Stegman said.

Debate Volunteer Coordinator and Longwood University alumna Macrae Hammond manages more than 1,000 volunteers involved in the debate preparation. Her volunteers are given different roles, from engaging voters on campus to ushering in the debate hall on the day of the debate.

“No one deserves this attention more than Longwood does,” Hammond said.

She added that the university values the sense of community and it is excited to showcase its community to anyone who will watch on Tuesday.

Hammond has worked closely with Longwood University President W. Taylor Reveley IV during the process of planning for the debate.

Reveley said it was a “really wonderful day” when he found out the debate would be hosted at Longwood University.

When the university was chosen last year to host the event, Reveley received a phone call from Michael McCurry, a co-chair of the Commission on Presidential Debates.

According to Reveley, McCurry asked, “Are you busy next October 4?”

“I sure hope we are,” Reveley said he replied.

From that moment forward, it has been truly busy, he added. But his university is now ready.

Being the site of the vice presidential debate has also allowed Longwood University students to explore interests they didn’t even know they had.

“I never even thought I’d be anywhere near politics,” said Malik Long, a junior and a volunteer for the event. “But now I get to sit in a vice presidential debate.”

Long decided to volunteer to be a role model for his peers.

“I’m very grateful for the opportunity I have,” he said.

Other students with an interest in politics are excited about what the debate means for the history of their university.

Kaitlin Owens, a senior and the fundraising chair of the College Republicans at Longwood University said that the debate allows her to gain a close experience in a field of her interest, as she is volunteering for the TV show Fox & Friends and is joining the moderators on set when the day begins for their team.

A large-scale event like the debate of course also means inevitable changes on campus and some students say there are many inconveniences.

When Stegman found out that Longwood University will be hosting the debate, his initial reaction was excitement. He said he’s still excited, but with so much going on it has become overwhelming, and it has impacted his living conditions. Because his dorm is closed on Monday and Tuesday, Stegman will have to stay with a friend on campus.

He is also concerned with the construction happening around campus leading up to Tuesday. “It’s kind of in the way,” Stegman said.

Rawls believes while the construction is an inconvenience, it’s only temporary.

“Maybe the walk to class is a little bit longer,” Rawls said. “But it’s a couple of weeks and I think it’s going to be a really cool thing for our university.”

Long believes construction has impacted how people navigate campus, but looks forward to what the university has planned over the next few days leading up to the debate, including the people who will be visiting.

Other concerns focus on security.

“I think everybody’s done the right preparation for the event,” Napier said. “But always with an event like this, security is my biggest concern.”

According to Col. Robert Beach, the director of public safety and chief of police, around 1,700 public safety professionals have been brought to campus from surrounding areas to help police the event.

Col. Beach said while the university has planned diligently for this historical event, he wants to make sure visitors are mindful and aware of their surroundings.

He describes the atmosphere on campus to be almost like “a Christmas-type anticipation.”

When asked what she expects on Tuesday, Debate Volunteer Coordinator Macrae Hammond said she anticipates “a lot of excitement. There’s going to be so much going on, but this is like the pivotal moment that we’ve been building toward for a year and a half now.” Longwood University will be hosting a public debate watch party at Stubbs Mall on Tuesday.

As far as concerns go, Hammond really doesn’t have any.

“Longwood is ready,” she said. “We really are. We have put our heart and soul into this.”

The vice presidential debate will be held from 9 to 10:30 p.m. on Tuesday.

By Pilar Curtis and Haley Winn (Special to WTVR.com)