VCU iPadJournos interviews with players of the Richmond Ravens about the Harry Potter game of Quidditch.

RICHMOND, Va. — Lisa Revette runs across a field in Petronius Jones Park on Idlewood Avenue. The Richmond Ravens chaser catches the ball and makes for the goal. She ducks under dodgeballs thrown by opponents. She takes aim, shoots, and scores.

Like more and more young Richmonders, Revette is playing the game of Quidditch.

Invented by bestselling author J. K. Rowling in her Harry Potter books, Quidditch is a full contact sport in which players have to dodge, score, and tackle all while keeping a broomstick between their legs. It gained popularity in the 2000s and now there are Quidditch teams playing all over the world.

Richmond got its own Quidditch team in August. The Richmond Ravens are the only competitive community team in the city.

Before the Ravens, the only Richmonders who could play Quidditch competitively were students at local universities or those willing to drive to the Quidditch team in Washington, D.C.

Now Quidditch is available to anyone over the age of 17 in Richmond. 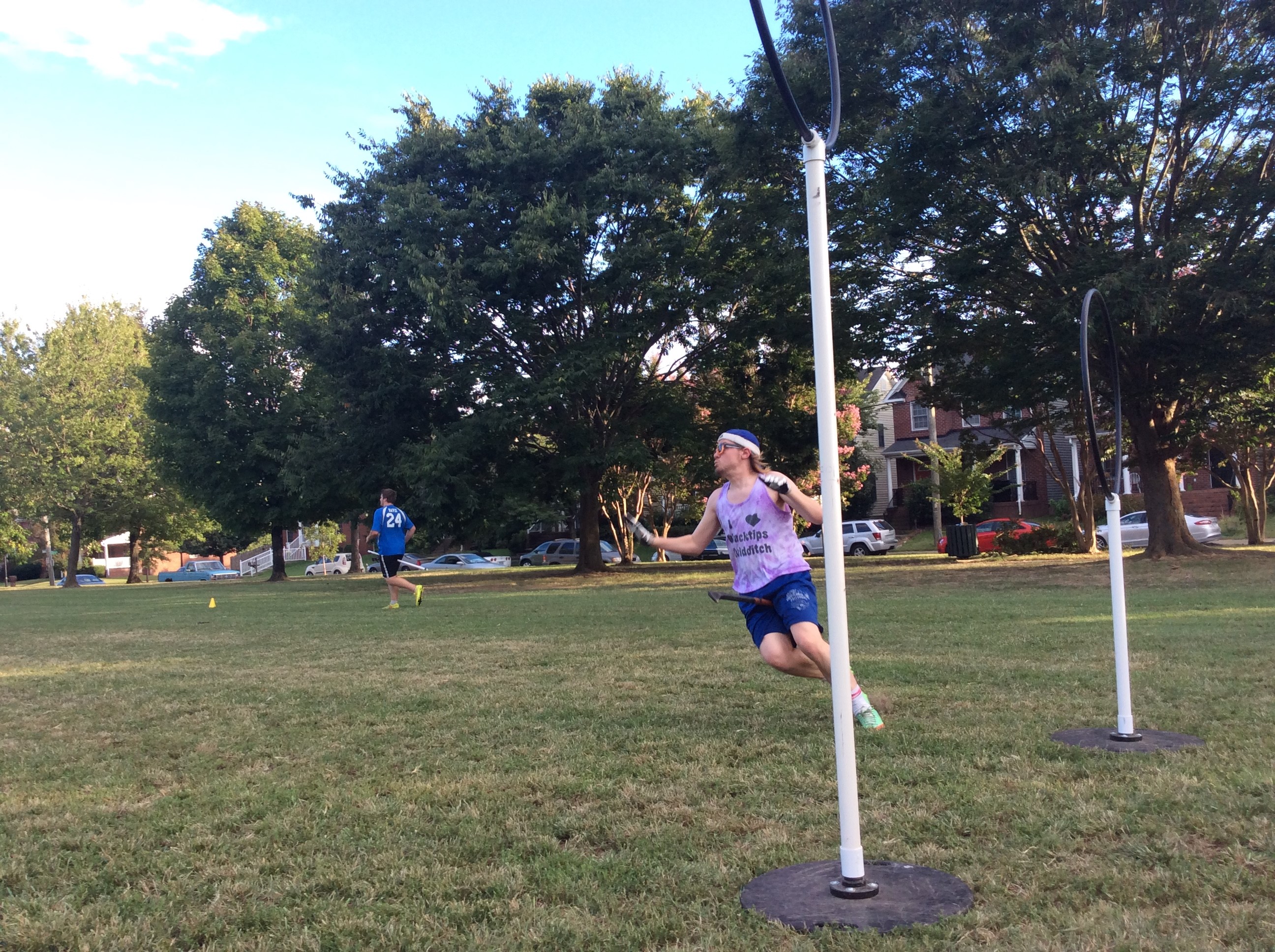 “The way I like to describe it is basketball, lacrosse, and rugby with dodgeball and flag football in there as well,” Alex Krall, a player for the Richmond Ravens, said.

Each team has seven members:

Players try to score by throwing the quaffle, a slightly deflated volleyball, through one of three hoops.

Players hit by a dodgeball must run back to one of their team’s hoops and touch it before returning to play.

“You shouldn’t just immediately assume it’s a bunch of nerds who don’t know what they’re doing,” Revette said. “It’s an incredibly intense game when you get the really good players together.”

“The biggest part of the game is the seekers snitch play,” Ted Stanton, founder of the Richmond Ravens, said. “The seekers have to catch the snitch. When the snitch is caught, the catching team gets 30 points and it ends the game.”

In the Harry Potter novels, the snitch is a magic flying ball. But in real-life Quidditch it’s a person who is not a member of either team.

The snitch is a person wearing a ball in a sock attached to the back of their pants, Krall said.

Seekers have to grab the sock off of the snitch in order to catch them.

"It's almost like an official and the only job of the snitch runner is to prevent either person from grabbing that sock off them, kind of like in flag football," Krall explained.

Stanton said the "maximum of four" rule of Quidditch states no more than four people who identify as being the same gender orientation can play at the same time.

For example, a team made of all male players will get disqualified from competitive play.

"For myself, it’s helped me see that I can be up there with dudes play," Revette said. "It’s also really gender inclusive, because it’s not just male-female gender, so I think that’s good because it’s trying to be really progressive."

The sport has been increasing in popularity over recent years.

David Lopez, a Richmond Ravens player, said he had been wanting to play the sport since high school and even looked at whether colleges he wanted to apply to had a Quidditch team.

"I just love it," Lopez said. "I’ve found a passion in playing."

Last weekend, the Ravens played their first tournament at the Tidewater Tussle at the College of William and Mary in Williamsburg.

The Ravens came in first place.

The Richmond Ravens practice every Tuesdays and Sundays at 6 p.m. at Petronius Jones Park.