RICHMOND, Va. – A poll released after the first presidential debate assessed the political climate in Virginia between candidates Hillary Clinton and Donald Trump.

The poll, by the Wason Center for Public Policy, attributed Democratic candidate Clinton’s lead in Virginia to her experience, but the poll still found that voters don’t trust her.

“Despite poor marks for honesty, Virginia voters are clear in their assessment that Hillary Clinton is far more qualified to be president than is Donald Trump,” said Dr. Quentin Kidd, Director of the Wason Center.

Clinton was viewed as more capable in many categories, except for economic questions – interestingly enough given Wall Street’s vocal skepticism of Trump.

The poll also found support among state voters for increasing the minimum wage to $15 and for Gov. Terry McAuliffe appointing Congressman Bobby Scott to the Senate seat until a special election in 2017, if Clinton wins.

Voter opinion among the over 1,000 people surveyed by the Wason Center is that Clinton is more qualified than Trump on many key issues, including many military and foreign policy issues.

However, by a close margin voters say that Trump is more trustworthy and honest than Clinton, 35-32 percent – with fully a third saying they did not know which candidate was more trustworthy or offering no response.

Clinton’s political experience only gave her a slight edge regarding who would be a better negotiator of trade agreements; Clinton edged Trump 49-46 percent.

Clinton’s decades of support for better healthcare was acknowledged among voters, who believe 56-35 percent, that Clinton could better address issues in the healthcare system.

But Trump bests Clinton on who would best promote economic development and jobs (49-44 percent) and on who would be better at reducing the budget deficit (45-42 percent).

Although, voters did believe Clinton would be more likely to fight for the middle class.

Voters think Trump would do more to help veterans than Clinton (47-44 percent). 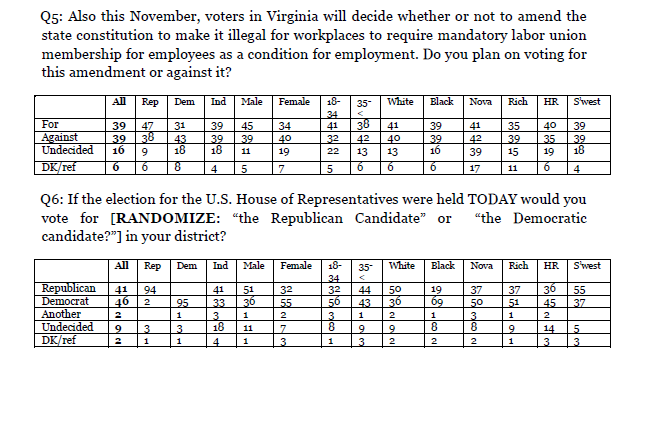 Voter positions on many of the key areas of debate so far in the presidential election align with Clinton more than Trump.

By a slim margin, voters support raising the minimum wage to $15 per hour (49-47 percent) and are evenly split on whether the Trans-Pacific Partnership (TPP) trade deal should be rejected or not (31-31 percent).

Regarding several other questions that will appear on Virginia’s ballot, voters are evenly split on whether to place the Commonwealth’s “right to work” law into the state Constitution, 39-39 percent.

The nearest second choice is Congressman Don Beyer, with 9 percent.

Scott has been in the 3rd District House seat since 1993 and served in the General Assembly before that.

“His support among Democratic voters in Richmond is more than twice his support in Northern Virginia, and in Hampton Roads it’s nearly four times as much,” said Dr. Rachel Bitecofer, Assistant Director of the Wason Center. “This is certainly a product of Scott’s long tenure in office.”

However, they approve of the job President Barack Obama is doing, 54-43 percent.

Voters are extremely sour on the job Congress is doing, with 82 percent disapproval to 12 percent approval.

Virginia likely voters have favorable views of Senators Mark Warner (52-22 percent) and Tim Kaine (52-33 percent), but most don’t know enough about Congressmen Bobby Scott and Don Beyer to have a view.