The history and mystery of the scarified trees of Maymont Park

RICHMOND, Va. -- Deep down in our beloved Maymont Park, by the big pools of the Japanese Garden, there's a giant holly tree and a half-dozen or so beeches that have thousands of stories to tell.

Amateur carvers have been working on them for generations.

Dates, names, initials, symbols, and frequently, signed hearts testifying of love that the carvers no doubt hoped would last as long as these trees begin on their deep-rooted toes.

They wander up their trunks, across their shoulders and arms and even up their necks.

If they were tattoos, this would be the site of the Richmond convention.

Today we see it as cruel. But it was once a common practice across this land, when settlers made their marks in sturdy trees.

It's been going on so long here in this corner of Maymont, many scars have grown over, much it done when this was a wide-open park with little oversight.

The smooth bark of the holly (Ilex opaca) and the beeches (Fagus grandiflora) were a big draw for thousands of love-struck carvers and those hungering for a little immortality. For the most part, the trees have weathered it well. 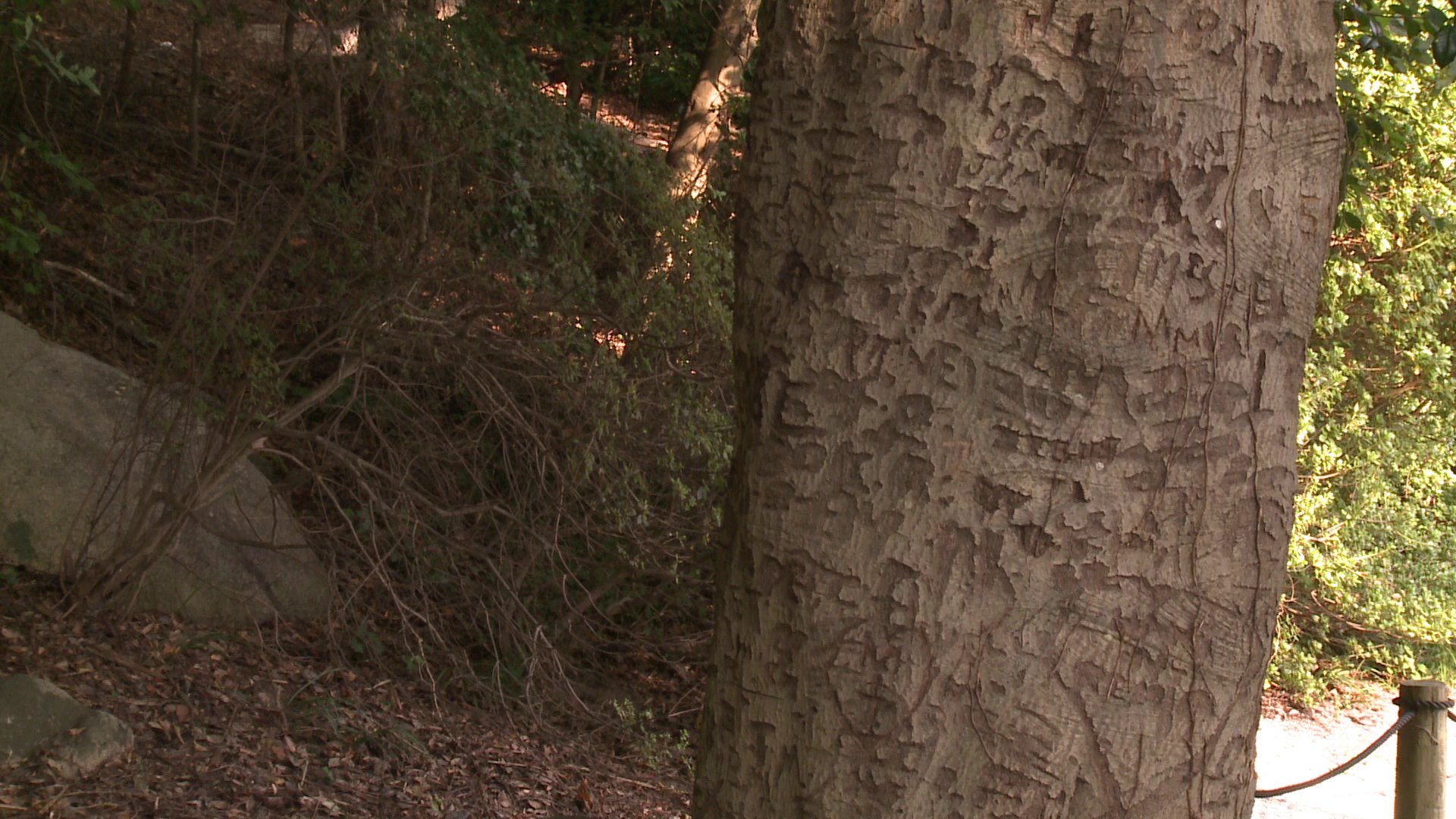 Syd Snyder of the Fan had recently moved to the Fan when he carved his 9-year-old daughter's initials for her in 1998.

"Never been there, just moved to Richmond," he recalled. "So we're walking around the park. It's just beautiful - just the wonder of the world as far as I was concerned, definitely of Richmond.”

"We ran into this tree and there were all these initials on it. This is unbelievable!"

He found a clear spot he could reach and he managed to scratch, not deeply, "KAS '98" with the tiny knife he had. "Not a good quality tool," he said.

Over the years, he and his daughter - now 26 - have walked the park, often returning to their favorite spot.

"It was good for a number of years," Sid said. "Now you can kind of see part of the K."

He was among the last to participate in a tradition that has seemingly stopped. Now you see more initials and signatures there made with marker pens.

Times have changed, one of the park workers told me. We are all much more aware of trees and the role they play in a healthy environment.

But what else has changed over the years?

I know when I was a kid, many boys and a good number of girls had knives in their pockets.

It was a rite of passage. And for some, like those in scouting or in hunting families, it was part of being prepared.

Now knives are frowned upon and can be illegal to carry, particularly for young people.

Maybe that's why the scarified trees of Maymont are getting a break.

And friends, please, if you go there, please look but don't carve. They'll blame me for bringing attention to their cool old trees that have thousands of stories to tell!