RICHMOND, Va. — In Richmond’s Southside, just off of German School Road, drivers stopped their cars and rolled down their windows when they spotted Joe Morrissey walking door-to-door.

Other people came out of their homes on Seaman Road to chat with the attorney turned mayoral candidate known by many as “Fightin’ Joe.” 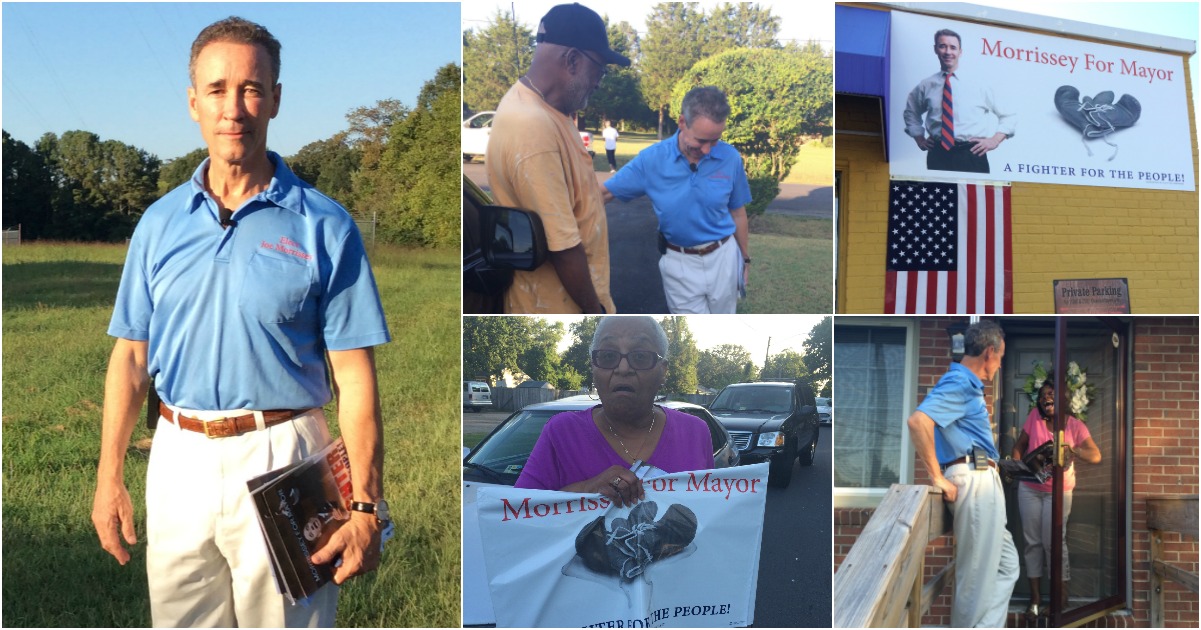 “I’m crazy about Joe,” said Charlotte Chapple, a Morrissey supporter who pulled over her car to say hello.

She had missed Morrissey the previous evening when he knocked on her door, so passing by and seeing him made her day.

“He has a reputation for being a fighter, and that I believe in,” she said.

Chapple added that if she had any legal troubles, Morrissey would be the man she would go to. For her, Morrissey is a people person and “a person who would do anything to try and help another individual that you know needed help.”

Henry Mease, a former Richmond Police detective and city council liaison, also noted that he would turn to Morrissey for help.

"That tells you something, because you know I know hundreds of lawyers," he said.

While some Richmonders seemed surprised in late August when a poll by the Wason Center at Christopher Newport University showed the controversial politician as the frontrunner in Richmond’s mayoral race, his supporters were not surprised.

Morrissey’s campaign manager Deborah MacArthur Repp said walking door-to-door with him was like walking with a rock star.

And Morrissey has made going door-to-door a top priority, because he said he wanted to go to nearly 20,000 homes by Election Day, according to Repp.

"If Joe Morrissey is unable to win the election outright, he will almost certainly be in a runoff," said Dr. Quentin Kidd, director of the Wason Center, in an interview with WTVR in August.

Southside resident Terry Richardson, was visibly excited when Morrissey showed up at her door.

"God is good!" she said when she saw the 59-year-old former member of the Virginia delegates.

She explained that she’d tried to get in touch with his law firm earlier that day about some trouble her son was in. After she explained that she had some difficulty contacting him, Morrissey gave her his personal cell number and told her to call that night to see how he could help.

"We need you," Richardson told Morrissey.

For this mayoral race, Richardson said she was looking for someone who could help Richmond grow, something she does not think has happened under current Mayor Dwight Jones.

Richardson enthusiastically asked Morrissey how his babies were doing, referring to his two young children with his former secretary and now wife, 20-year-old Myrna Morrissey.

Morrissey told Richardson to open his campaign pamphlet to page three for a family photo.

Joe met Myrna when she was an underage teenager. Joe Morrissey was later indicted on charges of indecent liberties.

Morrissey served a 90-day jail sentence in 2015 for contributing to the delinquency of a minor.

The sentence was the result of a plea deal Morrissey struck days before he was to go on trial on more serious charges related to his relationship with Myrna.

The relationship, subsequent charges, and jail time made some voters question Morrissey’s character.

He received the highest number of favorable and unfavorable ratings in the Wason poll, with responses leaning slightly towards unfavorable.

Over the years, Morrissey’s political and professional careers have been fraught with controversy. As an attorney, Morrissey was cited for contempt 10 times and misconduct five times, instances which included having a fist fight with opposing counsel during a criminal trial.

"I have numerous friends that are just mystified. I have some people who say, ‘I love and respect you but I certainly don’t respect the person you’re voting for,’” Repp said.

The campaign manager attributed these comments to a “distorted understanding” of Morrissey’s past legal troubles, adding that meeting Myrna had brought out the husband in him.

"I just don’t quite understand why who he marries has anything to do with how well he can run the city," she said.

"What we as the constituents have to understand or what we have to figure out is do those things make him a bad mayor, do they make him a poor choice for mayor," she added. "His personality makes it so hard to look away, even when it’s, he’s a train wreck."

In addition to his personality, Malachi described Morrissey’s business connections, and knowledge as tools that would make him successful as mayor.

Morrissey himself is well aware of his public perception and pointed to white voters who are 50 years or older as the demographic where he lacked the most support.

When probed, what he was referring to, Morrissey said it was about his wife.

"Well, they focus on the situation with Myrna," he said. "Although it’s never come up once in eight months in a campaign or forum, Myrna is one of my best assets."

Morrissey stressed that he doesn’t engage in negative advertising about other candidates, but this did not stop him from making pointed comments about the alleged vagueness of the education reform plan of a fellow candidate.

Neither is his focus on TV ads or cultivating a strong social media presence. Instead, Morrissey spends his time walking in Richmond neighborhoods and talking with residents.

“People love it when you come by and you talk to them,” he said.

Repp said this is one of Morrissey’s strengths, especially in minority communities in which he has done a lot of pro-bono legal work.

"They like him because he has been fighting for them for three decades in this city," she said.

One supporter in Southside called out to Morrissey from her front porch as he walked by.

"Joe, can I ask you a question? Real quick,” she said as Morrissey stepped onto her driveway.

She asked Morrissey about police brutality and the current mayor's lack of commentary on the subject. She shared that she was looking for a mayor who would be vocal against police brutality.

For Morrissey, these moments are the true focus of his campaign. He’s confident that his supporters will always take the high road.

"When the haters come out, my supporters will get stronger," Morrissey said.

He said he believed that his close ties to the community and relationship with constituents was what set him apart from the other candidates. He said that he wanted to earn support.

"These folks know me. I’ve represented them, I’ve given them advice, I’ve defended them. And so when I say on the signs ‘a fighter for the people,’ it’s not a slogan. They know that,” Morrissey said. “They know I’ve been doing that my whole life. My whole career. And that’s what I have that they can’t take away.”

By Cydni Gordon and Amy Lee (Special to WTVR.com)

EDITOR’S NOTE: WTVR.com has partnered with the “iPadJournos” mobile and social media journalism project at VCU’s Richard T. Robertson School of Media and Culture. Students from the project reported this story. The class plans to publish stories profiling each Richmond mayoral candidate.