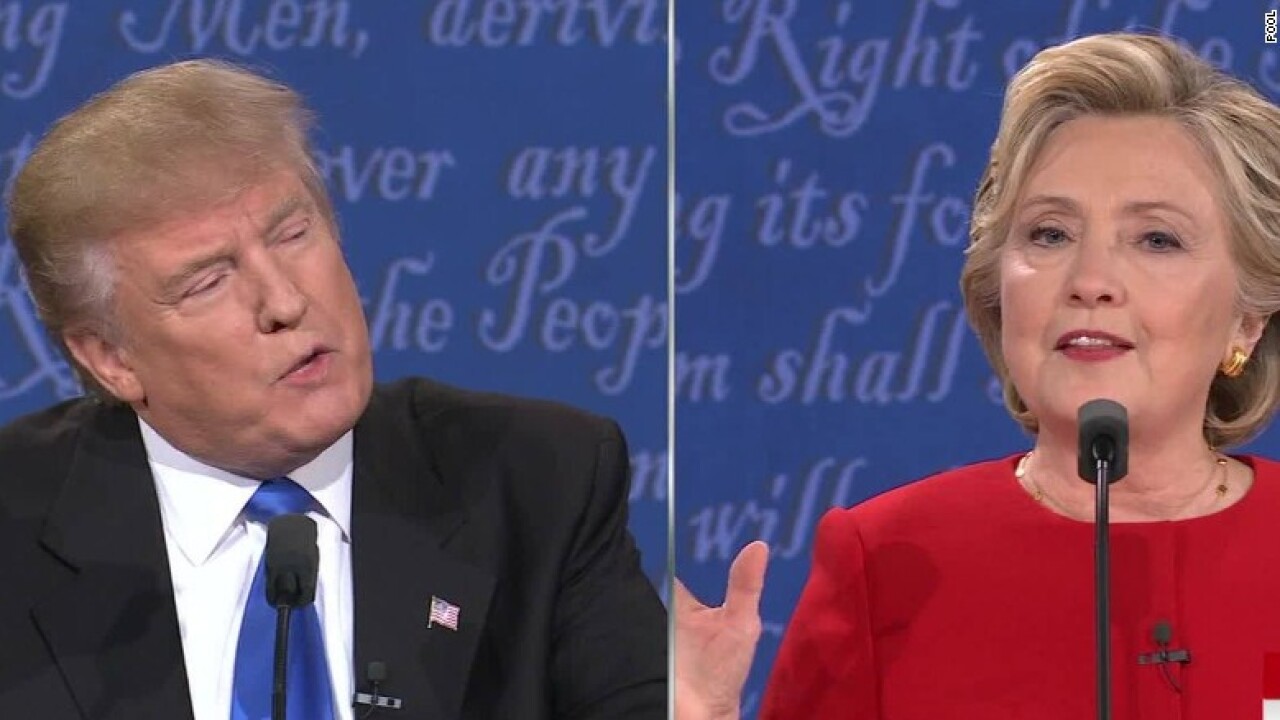 Hillary Clinton forced Donald Trump onto defense over his temperament, refusal to release his taxes and his past comments about race and women during a fiery debut presidential debate Monday — a potentially pivotal moment in a tight election campaign.

Clinton, who has seen her dominance of the presidential race fade in the weeks since the Democratic convention, delivered a strong performance in which she demonstrated a command of policy and a sense of humor, smiling through some of Trump’s strongest attacks. She delivered the best zinger of the night in response to criticism from Trump for staying off the campaign trail recently.

“I think Donald just criticized me for preparing for this debate,” she said. “And yes, I did. And you know what else I prepared for? I prepared to be President. And that is a good thing.”

Trump came out swinging at the beginning of the debate, and made some effective points on the economy and jobs — some of the aspects of his outsider presidential campaign that have struck a chord with many Americans. But the debate highlighted Trump’s tendency to make false claims as he made inaccurate statements on everything from laws regarding policing, his support for the Iraq War and his contention that Clinton was behind the so-called birther conspiracy.

Appearing in the “spin room” after the debate to talk to journalists, Trump said he was happy with his performance.

“It went better than I ever thought,” he told CNN’s Dana Bash.

One of the most powerful moments of the debate came when the conversation focused on the so-called birther debate following Trump’s recent acknowledgment that President Barack Obama was born in the US — a fact that has been evident for years. With Trump standing just a few feet from her, Clinton blasted him for perpetuating a “racist lie.”

“He has a long record of engaging in racist behavior,” Clinton said as Trump shook his head.

“You treated him with terrible disrespect and I watch the way you talk now about how lovely everything is, … it doesn’t work that way,” he said. “When you try to act holier than thou, it really doesn’t work.”

As the debate ended, Clinton hammered Trump over his treatment of women.

“This is a man who has called women pigs, slobs and dogs,” Clinton said.

She accused Trump of calling a Latina contestant in a beauty contest “Miss Piggy” and a housekeeper because of her ethnicity, seemingly throwing Trump off as he twice asked “Where did you find this?”

Clinton repeatedly sought to correct Trump’s statements — going so far as referring viewers to fact checks on her website — as she aimed to portray him as out of touch with the complexities of the American economy.

“I know you live in your own reality,” she told Trump.

Clinton and Trump opened the debate on a positive note by shaking hands before stationing themselves behind their podiums at Hofstra University on New York’s Long Island. The debate is attracting worldwide interest with a television audience expected to approach 100 million, lured by the extraordinary drama of the 2016 campaign.

And that drama quickly unfolded.

An increasingly angry Trump slammed Clinton for putting her plans to fight ISIS on her website — and thereby tipping off America’s enemy.

“Well, at least I have a plan to fight ISIS,” Clinton responded, referring to his previous statements that he has a “secret” plan to destroy the terrorist group.

Clinton also hit Trump over his refusal to release his tax returns.

“Why won’t he release his tax returns?” Clinton asked.

Clinton pressed Trump on the issue, saying “There is something he is hiding.”

Trump replied that he would release his taxes when Clinton made public 33,000 emails that were deleted from her private email server. When Clinton said that Trump had paid no federal income tax in some years, Trump replied “That makes me smart.”

Clinton also set about Trump’s business record, pointing out that he had called himself “The King of Debt” and accusing him of “stiffing” thousand of contractors who did work for his business.

When the debate turned to racial issues and crime, Clinton said that it was important for police to work together with local communities to restore trust.

Trump accused Clinton of refusing to say the phrase “law and order” and bemoaned the state of inner cities. He said that African-Americans and Hispanics were “living in hell.”

“You walk down the street, you get shot,” Trump said.

Clinton rebuked Trump for painting “such a dire picture” of black communities.

Campaign at a critical point

Trump and Clinton are facing off with the campaign at a critical point, as the race is a dead heat just 43 days before Election Day.

A CNN/ORC poll released Monday found Trump edging Clinton 42% to 41% in the crucial battleground state of Colorado among likely voters in a four-way race. In Pennsylvania, another key state, the poll found Clinton in a virtual tie against Trump among likely voters at 45% to 44%.

The former secretary of state is relying on both states to help pave her way to the 270 electoral votes needed to win the White House.

The rivals spent the day preparing for their big battle.

Clinton participated in mock debates with her tart-tongued former aide Philippe Reines playing Trump. In one practice debate, Reines assumed the character of the unpredictable nominee by praising Clinton for her role as a pioneer for women, campaign sources said.

Reines even wore the kind of signature red tie that Trump favors and adopted his characteristic hand gestures in a bid to fully prepare Clinton for her unpredictable foe.

The Republican nominee has watched videos of Clinton, but his preparation has been less intense than his opponent’s, in keeping with his more freewheeling style. He did not hold mock debates, for instance, with someone standing in for Clinton.